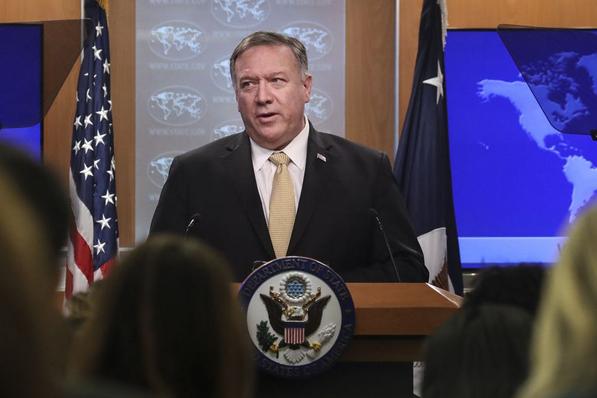 Above: 18 November 2019 – U.S Secretary of State Mike Pompeo announces change in U.S. position:, reversing decades-long US policy regarding Israeli settlements: they are not necessarily "inconsistent with international law."

20 November 2019 – United Methodists for Kairos Response (UMKR), an independent movement for Palestinian rights grown from the grassroots of the United Methodist Church (UMC), is appalled by the Trump administration’s disgraceful reversal of long-standing U.S. policy on the illegality of Israeli settlements in the occupied Palestinian territories.

UMKR affirms with appreciation the 19 November statement on Twitter from the United Methodist General Board of Church and Society (GBCS): “The United Methodist Church asserts the building of settlements are illegal according to the Fourth Geneva Convention.”

Far from being a recent position, the global Christian denomination’s opposition to Israeli settlements dates as far back as the UMC General Conference of 1976. Today, United Methodists in UMKR join with fellow Christians and people of faith in many communities in condemning the alarming announcement by the US government.

Political analysts, human rights defenders, and government leaders in Palestine, Israel, and around the world, including elected officials in the U.S., are describing the Trump administration’s declaration as a frightening invitation to unrestrained settlement expansion, quite possibly leading to Israeli annexation of large swaths of the West Bank in the foreseeable future.

UMKR stands firmly on the irrefutable consensus of the international community: Israel’s settlements egregiously violate decades of international law, including such legal instruments as the Geneva Conventions, the United Nations charter, the charter of the International Criminal Court, and the 2004 ruling by the International Court of Justice, as well as numerous UN resolutions from the Security Council and the General Assembly.

On 18 November, U.S. Secretary of State Mike Pompeo announced that the United States was reversing its long-standing position on the legal status of Israeli settlements and was rejecting the 1978 State Department legal opinion that considers Israel’s settlements in occupied territories to be “inconsistent with international law.”

In so doing, the Trump administration has demonstrated for the world yet again that its own policies, particularly those pertaining to Israel/Palestine, are conspicuously in violation of international law.

Previous displays of this administration’s disdain for ­– or ignorance of? – international law include:
• U.S. recognition of Israeli annexation of Syria’s Golan Heights,
• U.S. recognition of Jerusalem as Israel’s capital, ignoring the legal status of East Jerusalem as occupied territory,
• move of the U.S. embassy to the partially occupied city of Jerusalem, and
• ongoing U.S. efforts to revoke the refugee status of millions of Palestinians.

NOT SO EASILY DONE

However much the current White House administration may wish otherwise, the United States has no legal authority to unilaterally create or interpret international law. And it will not easily sway the international community, including its closest allies.

Since the U.S. statement was made this week, the European Union and Canada, among many other powers, have issued statements that constitute rebuttals to the recent U.S. announcement. All of its fellow UN Security Council members have rebuked the US for its reckless change in policy.

These international responses are a reflection of the global community’s longstanding position on the settlements. As recently as December 2016, United Nations Security Council again confirmed the UN’s decades-long position, in Resolution 2334:

“the establishment by Israel of settlements in the Palestinian territory occupied since 1967, including East Jerusalem, has no legal validity and constitutes a flagrant violation under international law and a major obstacle to the achievement of the two-State solution and a just, lasting and comprehensive peace” (emphasis added).

Indeed, ever since Israel began its settlement enterprise in the late 1960’s, the United States’ official position also has acknowledged the illegality of Israeli settlements, that is, until this week’s shocking statement by Secretary of State Mike Pompeo.

Jimmy Carter, Ronald Reagan, and every succeeding U.S. president until Donald Trump has expressed opposition to the settlements, which are segregated cities and towns built solely for Jewish Israelis throughout occupied Palestinian territory. Israel acquired this land in the war of June 1967 and has tightly controlled it for 52 years under a brutal military regime.

Under modern international law, nations are forbidden to extend their borders through warfare or aggression. Indeed, that is one of the fundamental tenets on which the United Nations was founded.

Since an occupier may not keep land it has acquired through warfare, post-war military occupations must be temporary. Occupying powers are particularly forbidden to move their own citizens into the occupied territory as permanent residents: i.e. to colonize that land.

On that basis, the United States voted for the unanimous UN Security Council Resolution 242 of 1967, which required Israel to release the territories it had taken that same year. Rather than comply, Israel soon began to colonize that territory illegally with the establishment of settlements.

During the ultimately failed peace process that began in the early 1990’s, the purported goal of all parties was the establishment of a Palestinian state in the occupied territories: the West Bank and Gaza Strip.

Nevertheless, throughout that same quarter century of the so-called peace process, rather than prepare to fully withdraw from the occupied territories, Israel brazenly expanded its colonization and the Israeli occupation tripled in size. Today there are roughly 750,000 Israeli settlers living illegally in the occupied West Bank including East Jerusalem.

Colonialism is one of the worst scourges of human history, incorporating the multi-faceted crimes of ethnic cleansing, destruction of precious natural resources, destruction of entire communities, cultural extinction, and genocide.

Under the charter of the International Criminal Court, colonialism is a war crime, and the world community has taken huge strides in eradicating this crime over the last century, although that work is not finished, and many nations are still recovering from its destructive legacy.

Israel’s ever expanding colonization of historic Palestine and the disgraceful acquiescence of the United States should be treated as deeply disturbing, unacceptable aberrations in the 21st century global community.

UMKR wholeheartedly supports the United Methodist Church’s official position on the Israeli settlements, a position it has held since 2004 and renewed in 2012:

"The United Methodist Church opposes continued military occupation of the West Bank, Gaza, and East Jerusalem, the confiscation of Palestinian land and water resources, the destruction of Palestinian homes, the continued building of illegal Jewish settlements, and any vision of a 'Greater Israel' that includes the occupied territories and the whole of Jerusalem and its surroundings."

At the next quadrennial United Methodist General Conference, to be held in May 2020 in Minneapolis, the UMC will have the opportunity once again to renew this resolution that is aptly titled: “Opposition to Israeli Settlements in Palestinian Land.”

It is a Christian declaration of truth spoken in love, infused with moral clarity, and informed by decades of firsthand experience with both the Israeli and Palestinian peoples.

It befits a denomination known globally as a justice leader and peacemaker: for the church’s extensive mission work throughout the Holy Land, for its stalwart opposition to the Israeli occupation, and, most recently, in calling for a global ban on imports from the settlements and for trail-blazing actions in divesting from Israeli banks and businesses that sustain and profit from that occupation.

UMKR will be working diligently to support a reaffirmation of the UMC’s call for a just peace in the Holy Land. Beginning in the New Year and throughout the winter of 2020, visit UMKR’s website to follow and be involved in this work: www.kairosresponse.org.