Congressional Briefing on Wadi Foquin and

At a Nov. 19 briefing held at the U.S. Capitol Visitors Center in Washington, DC, residents of the West Bank village of Wadi Foquin described the dire threat Israel’s occupation poses to their village. The event, organized by a myriad of organizations, was well attended, as more than 50 legislators sent staff members to the briefing.

Wadi Foquin is seeking international support because Israeli authorities are threatening to expand the separation (or apartheid) wall through the village. The villagers warn that this would destroy the village both economically and socially.

Ahmad Sukar, Wadi Foquin village council president, noted that the village already faces an existential threat from the neighboring Betar Illit settlement. Since 1967, he said, the illegal settlement has slowly encroached on Wadi Foquin’s land. The village, which encompassed 3,000 acres of land in 1948, now has less than 740 acres of land because of the settlement, Sukar pointed out.

“Most of our land is subject to being confiscated by Israeli authorities,” Sukar lamented, questioning why his village is being made to suffer. “We have the right to live as any other people and use our own resources like normal human beings,” he said.

Fahmi Manasra, director of outreach for the Wadi Foquin Community Development Project, noted that the Betar Illit settlement uses Wadi Foquin as a dumping ground for its waste. Sewage flowing from the settlement floods agricultural fields and contaminates drinking water, he explained. “It [the sewage system] is just aiming and running down toward our fields, filling our precious land,” he bemoaned.

The contamination of fields is harming Wadi Foquin’s economy, as most villagers make their living from farming. Aware that the village’s vegetables are being exposed to sewage, many individuals and businesses no longer purchase Wadi Foquin’s produce, Manasra noted. “It kills the economy and income of our farmers,” he said.

Israeli authorities attempt to control many aspects of life in Wadi Foquin, Manasra explained. For example, the Israeli military issued orders for Wadi Foquin to tear down a recently built playground. “We wonder what kind of threat this poses,” he commented.

Dudy Tzfati, a resident of the Israeli village of Tsur Hasassa, which lies across the Green Line from Wadi Foquin, expressed outrage with his government. “I want people to know there is another Israel out there, an Israel that is not accepting or agreeing with what our government is doing,” he said. “I represent a significant number of Israelis who think the path our government is taking is disastrous and will only lead to violence.”

Tzfati said he has tried with little success to speak to Betar Illit settlers on behalf of the people of Wadi Foquin. “Honestly, they don’t care much,” he said of the settlers. “It’s not easy to move them.”

“I ask you to be on the side of my people,” Raed Samara, West Bethlehem district coordinator of mayors and village councils, told the congressional staffers. Indeed, he reminded his audience, “U.S. policy has always been against the construction of Israeli settlements.”

For more information on the effort to save Wadi Foquin, visit www.friendsofwadifoquin.com. 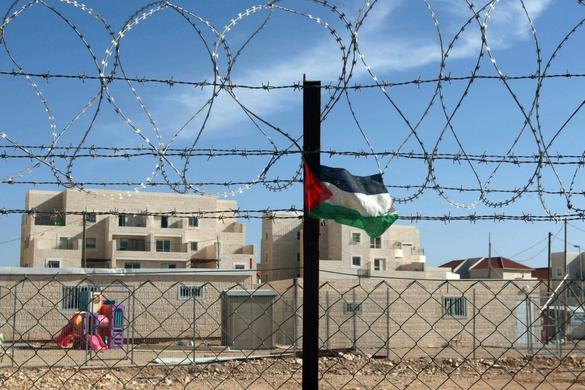 Above: A small Palestinian flag attached to a fence fluttering outside the Israeli settlement of Beitar Illit, on the outskirts of Jerusalem. (Photo: AFP)

While Israel’s right-wing Economy Minister was telling American audiences that the occupation doesn’t exist, a Palestinian coordinator for the district of Bethlehem was preparing to utter statements of a much different sort.

On November 19th, the coordinator, Raed Samarra, joined three others–two Palestinians from the village of Wadi Foquin and one Israeli–at a briefing in Washington, D.C. to talk about the village near Bethlehem that is beset by settlement expansion and the separation barrier. The talk was held in cooperation with Congresswoman Barbara Lee’s office, and was sponsored by the Arab-American Institute, Americans for Peace Now, Churches for Middle East Peace and the United Methodist Church’s General Board of Church and Society.

In addition to Samarra, the talk featured Fahmi Manasra, director of outreach for for the Wadi Foquin Community Development Project; Ahmad Sukor, President of the Village Council; and Dudy Tzfati, a resident of the neighboring Israeli town just over the Green Line. Congressional staffers and others attended to hear testimony largely missing from the American discourse on the conflict.

The peace process between Israel and the Palestinian Authority has not produced results, Samarra somberly noted in an interview a few days after he testified.  “20 years of waiting with no results on the ground. On the contrary, things are getting worse,” he said in a phone call from Washington, D.C. “Life is not normal.”

The November 19th briefing (you can listen to it here) was a tour de force on how exactly negotiations have failed. The speakers detailed how the settlement of Beitar Illit was gobbling up Wadi Foquin’s land; how the separation barrier was affecting their lives; and how sewage from the settlement was killing their agricultural fields. All of this has continued to happen as peace talks grind on between Israel and the Palestinian Authority.
The village’s plight has been taken up by United Methodists in California, who have formed the Friends of Wadi Foquin. Through their efforts, Wadi Foquin has come to the attention of at least some legislators.

Mondoweiss obtained a letter about the village that was sent to a constituent from Congressman Joe Courtney, who represents a district in Connecticut. The Congressman acknowledged that the “Israeli government has issued land confiscation orders” to expand the settlement and that the village’s situation has been brought to the attention of the State Department, who “issued a statement acknowledging the importance of ensuring access to clean water for the villagers of Wadi Foquin.”

That news would be music to Manasra’s ears, who told the audience at the briefing that “we are trying to bring the reality to you to be aware of this situation..If we lose this land, ladies and gentlemen, we lose our existence.” To untrained ears, Manasra’s dire predictions would sound hyperbolic.  But Wadi Foquin has been losing its land and livelihood for decades.  In fact, Wadi Foquin, which sits right over the Green Line separating Israel from the Palestinian territories, already lost the vast majority of its land at the end of the 1948 war.  The village was blown up by the Israeli army in 1954.  In 1973, in a rare feat, the villagers were allowed to go back to Wadi Foquin. 1,200 people live there today.

Today, Wadi Foquin’s troubles stem from the settlement of Beitar Illit.  Founded in the early 1980s, it has one of the fastest population growth rates, and about 35,000 settlers live there on land confiscated from Wadi Foquin.
Many villagers of Wadi Foquin rely on farming to make a living–or at least they used to. The settlement has put a large dent in that lifestyle, causing high unemployment and forcing residents to work by constructing the very same settlement gobbling up their land.  Sewage from Beitar Illit has damaged fertile soil and water supplies. At the Capitol Hill briefing, Manasra said that this was killing their land and economy. Dudy Tzfati, an Israeli from Tsur Haddassa–an Israeli town where residents have supported Wadi Foquin in its struggle to hold on to their land–noted that rubble from the construction of settlements was also damaging the land. “The village is under existential threat,” said Tzfati.

The separation barrier that has de facto annexed Beitar Illit makes access to Bethlehem onerous.  When it was first being built, the route of the separation barrier would have encircled the village and damaged the flow of spring water in the village.  But villagers from Wadi Foquin, with help from residents of Tsur Hadassa, stopped the plan–for now. Still, the Israeli army could always decide to build that section of the separation wall, and meanwhile Beitar Illit continues to chew up Wadi Foquin’s land.  For all these reasons, the speakers said the U.S. should step in and take action.

“The U.S. has always told the world that the building of settlements on Palestinian land forms a real obstacle to making peace between Israelis and Palestinians,” said Samarra at the briefing. “It feels strange that the U.S. vetoes anything that asks Israel to respect international law, human rights or realizing Palestinian freedom.”