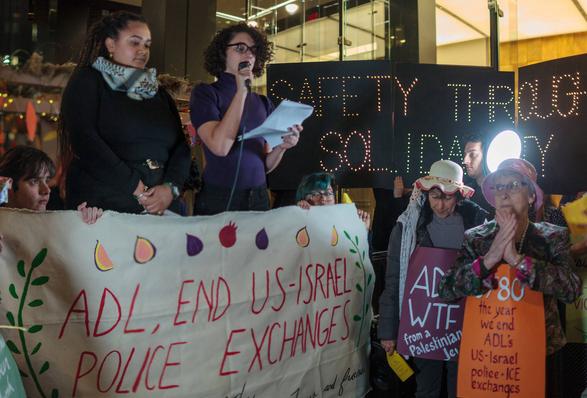 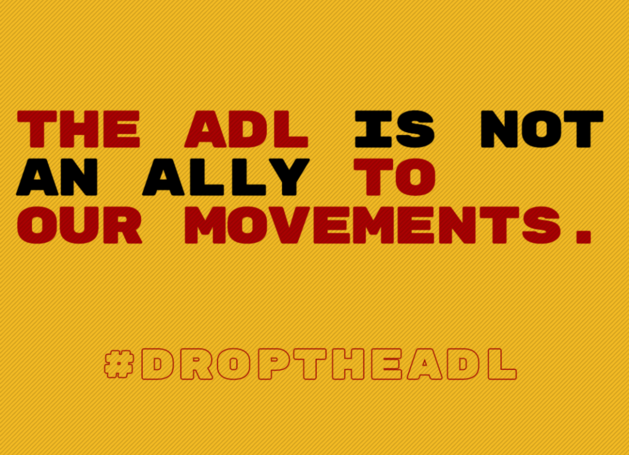 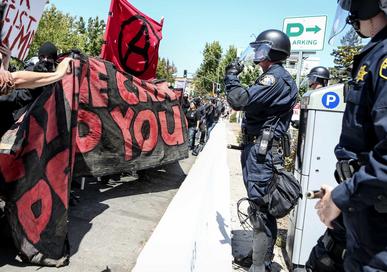 See resources and articles on the right side of this page. >>>
Scroll down this page for an action opportunity.

The Anti-Defamation League (ADL) has branded itself as a civil rights organization in ways that conceal and legitimize its right-wing activities undermining the rights of Black, immigrant, queer, Muslim, Arab, and other marginalized communities.

Many progressive individuals and organizations partner with the ADL not knowing its ongoing legacy of supporting racist policing, surveillance, colonialism, and the silencing of social justice activism.

Misinformation about the ADL’s work, and its credibility in progressive circles, are what allow the ADL to continue harming social justice movements.

A primer has been compiled by organizations across the US working in coalition for freedom, justice, and equality, in the hope that it can be helpful in strengthening all of our social justice movements in resisting repression and advancing a vision of liberation for all.
See the primer at the website: DropTheADL.org.

The ADL is not an ally.

An Open Letter to Progressives
UMKR is a signatory on this letter.

We are writing to ask you to reconsider the Anti-Defamation League (ADL) as a partner in social justice work.

Many organizations in our communities find themselves in spaces with the ADL, using its anti-bias education materials, or counting on the ADL to support our political goals. In light of a growing understanding of the ADL’s harmful practices, many progressive groups are rethinking those relationships.

Even though the ADL is integrated into community work on a range of issues, it has a history and ongoing pattern of attacking social justice movements led by communities of color, queer people, immigrants, Muslims, Arabs, and other marginalized groups, while aligning itself with police, right-wing leaders, and perpetrators of state violence. More disturbing, it has often conducted those attacks under the banner of “civil rights.” This largely unpublicized history has come increasingly to light as activists work to make sense of the ADL’s role in condemning the Movement for Black Lives, Palestinian rights organizing, and Congressional Representative Ilhan Omar, among others.

We are deeply concerned that the ADL’s credibility in some social justice movements and communities is precisely what allows it to undermine the rights of marginalized communities, shielding it from criticism and accountability while boosting its legitimacy and resources. Even when it may seem that our work is benefiting from access to some resources or participation from the ADL, given the destructive role that it too often plays in undermining struggles for justice, we believe that we cannot collaborate with the ADL without betraying our movements.

TAKE ACTION
Join UMKR and dozens of progressive movements and organizations in signing the open letter. There are two forms, for organizations and individuals:
https://droptheadl.org/sign-on/

The Right to Boycott

The Palestine Exception to Free Speech: A Movement Under Attack in the US
See the Executive Summary at Palestine Legal
Download this report

The Business of Backlash: The Attack on the Palestinian Movement and Other Movements for Social Justice
International Jewish Anti-Zionist Network (IJAN)

What is the Anti-Defamation League doing in my school?
Medium.com  •  2021

U.S. Police are Being Trained by Israel—And Communities of Color Are Paying the Price
The Progressive  •  2019

Marc Lamont Hill Was Arguing for the Rights of Humans, Not of States
The Nation  •  2018

Revealed: Deputy Director of ICE was sent by the ADL for training with the Israeli military
Jewish Voice for Peace  •  2018