A Methodist and A Jew Walk Into the Tampa Convention Center In Support of Divestment
By Ariel Vegosen - Jewschool, Apr 25, 2012

A Letter To The Methodists In Support Of Divestment
By Philip Weiss - Mondoweiss, Apr 24, 2012

by Anna Baltzer - US Campaign to End the Israeli Occupation, January 26, 2012

Articles by UMKR and Members 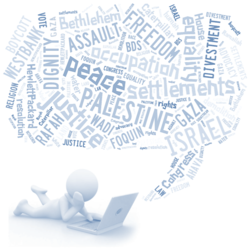