IN ADDITION TO THE ARTICLES ON THIS PAGE, SEE ALSO:
Letter from Rev. Alex Awad to Annual Conferences of the United Methodist Church, May 2013  See this
Is the Church Committed to Middle East Peace? An Open Letter to UMC Leaders, May 2018  See this

Equality, Freedom and Justice for All, But Not for Palestinians!
Alex Awad, October 2020

Would a Biden/Harris win

Palestinians or would their

justice for all but not for

As I watched the 2020 Democratic National Convention, I  was amazed at how many times the words “justice,” “equality,” “human rights” and “freedom” were uttered by the distinguished speakers, not to mention numerous sentences which addressed these issues conceptually. The Bidens, the Obamas, the Clintons, Kamala Harris, Bernie Sanders and other speakers repeatedly promised that a new administration under Joe Biden and Kamala Harris would work hard to bring justice, equality and fairness to the unemployed or underemployed, to African Americans, to Latinos and Native Americans, to women, to students, to gays and straights and to all Americans suffering from a failing health system.
Read more

As I read your article, Time is Running out for Palestinians, I felt the weight of heavy boots on Palestinian necks.

You blame the Palestinians for missing all opportunities to make peace with the State of Israel and you call the unholy rush of some rich Arab leaders to normalize relations with Israel as a move towards peace. You consider the fact that the Palestinians are not joining this opportunistic haste as another missed opportunity. The truth is, there has not been one genuine opportunity for a just peace that Palestinians missed. Palestinians rejected many offers to surrender their legitimate rights and they were brave and steadfast in refusing to abdicate their rights in spite of the enormous weight of Israeli, US, hyper Zionist, Christian Zionist, rich Arab leadership and your very own boots on our neck.
Read more
Published in Mondoweiss under a different title

Should Evangelicals Terminate Their Affair With the State of Israel?
Alex Awad, June 2020

For Years, I, a Palestinian and evangelical, have watched with pain the unholy alliance of evangelicals and the State of Israel. Evangelical infatuation with Israel began before there was a Jewish state in the Holy Land. British evangelicals, some of whom were Christian Zionists, helped bring the Jewish state into existence. This fixation kept deepening in the last seven decades.

We used the Bible, our pulpits, publications, politics, finances, and our radio and TV stations to expand the territory and power of a Zionist state in  Palestine. The average evangelical in the U.S. does not realize the volume of hurt and harm that the political might of evangelical leaders has wrought on the people of the Middle East and especially on Palestinians.
Read more

We believe and confess that God is good, all-powerful and “God is love”. We also believe that he is near and that he cares. How can we reconcile what we believe about God with the Covid-19 pandemic that is rattling humanity?

God must be aware of this pandemic. Why doesn’t he come swiftly and put an end to the Coronavirus? Is he on a vacation? Are those correct who claim that God is angry at us and this pandemic is the beginning of his wrath?

I don’t hold God responsible for starting this virus. It didn’t originate in heaven but rather in China and I don’t hold the Chinese any more responsible than the rest of us. But since it is such a threat to humanity why doesn’t God intervene to eliminate it?
Read more

Straining Out a Gnat but Swallowing a Camel
Alex Awad, October 2019

Israel’s apologists never seem to tire of pointing a finger of accusation at the Palestinian Authority (PA) with allegations that the PA persecutes Palestinian Christians. Hence, they say, the decline of the indigenous Christian population in the Palestinian territories.

Jesus had words to describe such accusers: "You blind guides! You strain out a gnat but swallow a camel.” Matthew 23:24 NIV. The camel in the room is the occupation, and Israel’s apologists want to shift blame from the massive crimes of the occupation to place the PA in the defendant’s seat. These accusers are not willing to look at the thousands of dunums of land that have been confiscated from Palestinian Christian landowners by Israeli settlers and government agents. They turn their eyes away when Israeli bulldozers demolish Palestinian Christian homes and farms, and they keep totally silent when thousands of Palestinian Christians, like me, lose the right of citizenship in their homeland because they left the country to study or to work overseas.
Read more

It is deplorable and somewhat surprising

to the United Nations, wave a Bible at a

session of the Security Council to defend

his country’s theft of Palestinian land in the

West Bank. He is certainly inspired by his

boss, Benjamin Netanyahu, who, although

The misuse of sacred texts to score political

gains has a long history. The Bible has often been manipulated by false prophets, corrupt religious leaders, and shrewd politicians to support their self-serving agendas. In the Middle Ages, popes and emperors quoted the Bible to justify their influence on nations and armies toward committing grave atrocities. The Crusades and the Inquisition are examples. European powers supported by church leaders quoted the Bible to defend slavery and to justify colonialism. In more recent history, the Bible has been frequently used to support the occupation and ethnic cleansing of Palestine.
Read more

It is an accepted fact that U.S. policy in

Israel/Palestine has been pro-Israel from

the days of Harry Truman’s presidency

all the way to Barack Obama’s. Even so,

from time to time the United States could

be critical of Israeli policies and have

threatened to punish Israel for violating

followed through on threats, including

settlements, and Ronald Reagan, who suspended a strategic cooperation agreement after Israel illegally annexed the Golan Heights in 1981. However, with Donald Trump occupying the White House, a shift has taken place in U.S. policy toward the Israel-Palestine dispute. Now, U.S. policy is no longer merely pro-Israel, but rather fully right-wing Israeli. Whatever Binyamin Netanyahu and his far-right government ask the United States to do for them, Trump complies and hands it to them on a silver platter.

Here is the Israeli wish list that other U.S. administrations refused to grant and Trump’s administration has handed over, asking nothing in return:

Recognize Jerusalem as the capital of Israel;
Move the U.S. Embassy from Tel Aviv to Jerusalem;
Declare that the future of Jerusalem is off the negotiating table;
Call for the dismantlement of United Nations Relief and Works Agency (UNRWA) and an end to all U.S. contributions to the U.N. agency. The U.S. was paying more than a quarter of the agency’s $1.2 billion annual budget.
Call for removal of the refugee issue (the right of return of Palestinian refugees) from future negotiations;
Support the redefinition of the term “Palestinian refugee” so that children of Palestinian refugees do not retain refugee status (which is contrary to UNHCR guidelines that refugee dependents “are normally granted refugee status according to the principle of family unity”);
Reduce significantly U.S. annual support to the Palestinian Authority;
Cut $25 million in U.S. aid to Palestinian hospitals, including those in East Jerusalem;
Consistently withhold criticism of Israel’s human rights violations and brutality against Palestinians, especially in international forums like the U.N. Security Council;
Close the Palestine Liberation Organization’s mission in Washington, DC, leaving the Palestinians without a formal presence in the U.S. capital.

What is behind this shift in U.S. policy toward the Palestinians?
Read more

As a Palestinian Christian pastor and longtime peace activist, I have a confession to make: I’m guilty of despair.

For many years, Jewish, Palestinian and international peacemaker groups and individuals, myself included, have worked hard to influence US leadership by working with grassroots America or directly with members of Congress. We worked particularly hard with and through mainline Christian denominations and groups committed to peace and non-violent resistance like Mennonites and Quakers to bring balance to the political landscape. Palestinians, Christians and Muslims, along with Jewish activists, crisscrossed the US advocating for a balanced US policy. We hoped ultimately all this advocacy would result in a fair US policy towards the Palestinians.

The Honorable Theresa May, Prime Minister of the United Kingdom:

I am a Palestinian who was born in Jerusalem in 1946 during the British Mandate over Palestine. During the first Arab-Israeli war in May 1948 I was two years old. My father, a civilian, was shot and killed in crossfire between the Zionist Haganah militias and the Jordanian army, leaving my mother to care for seven children. The oldest of my siblings was eleven and the youngest six months old. Soon after the death of my father, our neighborhood was taken over by the Israelis and we fled, becoming refugees. As I grew up, I began to ask questions about why my father was killed, what caused the Israel/Palestine conflict and what triggered all the suffering of millions of Palestinians and Jews in the last 100 years.

In time, I learned about the Balfour Declaration and the British Mandate over Palestine. I discovered that in 1917, the British Foreign Secretary sent a letter, later called the Balfour Declaration, to Lord Rothschild and Zionist leaders, promising to support the creation of a homeland for the Jews in Palestine. After WWI, against the objections of my people, the British government colonized Palestine and made it possible for the Zionist movement to take over our homeland.
Read more

Who would deny that Israel has the right to defend its citizens? Every country in the world has the right and obligation to defend its citizens, and Israel is no exception. However, the problem with the above statements is that they stop at Israel's rights, leaving out the other part of the story. They ignore the context of this conflict that began early in the 20th century and has continued to develop since then. What part of the story is disregarded? The very backdrop that created this mess in the first place.
Read more 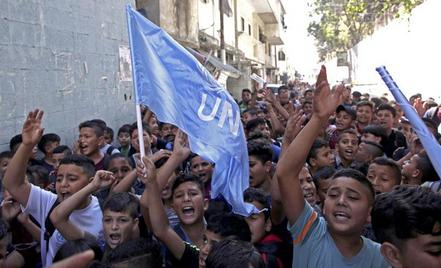 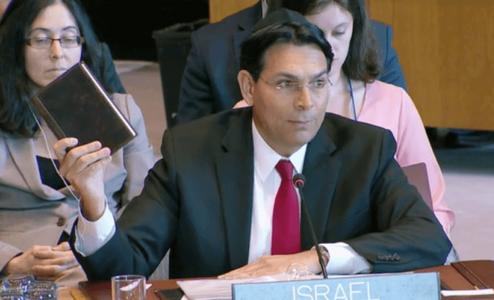 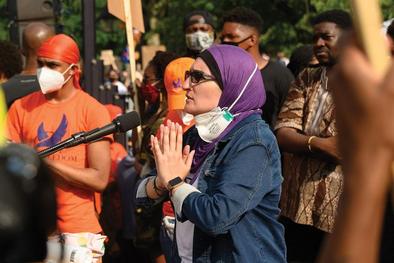 Palestinian students protest the cut to UNRWA and closing of their schools.

MAY 2020, in Minneapolis, Minnesota, resolutions on:

We also have BIG PLANS for educating A

LOT of people throughout our church about Palestinian rights, with literature, displays, events, meals, and witness actions!

GC 2020 is our BEST OPPORTUNITY to once again make an impact for Palestinian rights throughout our denomination, on four continents.

WE URGENTLY NEED YOUR HELP,

Please give as generously as you can, and know that whatever you are able to give

will be gratefully appreciated.