See Resources, News & Commentary on the right side of the page.

April 2022 Update: Student Pledge
Undergraduate and graduate students across the country have launched a pledge refusing to take jobs or internships at Amazon and Google for their role in powering Israeli apartheid and violence against the Palestinian people.

An excerpt of the pledge:

"As students in STEM and beyond, we're joining the #NoTechForAparheid campaign to demand Amazon and Google cut the contract known as Project Nimbus. Technology should be used to bring people together, not enable apartheid and ethnic cleansing."

See the full text and, if you're a student who supports Palestinian human rights, add your name to the #NoTechForApartheid pledge here:

https://act.newmode.net/action/mpower-change/take-student-pledge-refuse-jobs-google-amazon-powering-israeli-apartheid
Send word about this action to any college students you know!

November 2021 Update
The number of Google and Amazon workers pushing their companies on #NoTechForApartheid is well over 1000 now and keeps going up. We should support their action and build on this momentum!
TAKE ACTION HERE

From the Palestinian BDS National Committee (BNC)
12 October 2021 - Nearly 800 workers at Amazon and Google have joined forces to demand their employers pull out of Project Nimbus – a $1.2 billion contract to provide cloud services for the Israeli military and government – and cut all ties with the Israeli military.

The courageous workers at every level of Amazon and Google are making it very clear that technology should be used to bring people together, not enable apartheid and violence.

They deserve our support. Send an email to Amazon and Google execs & let them
know that there’s still time to do the right thing: Cut Project Nimbus, and stop doing business with Israel’s apartheid government.

Project Nimbus is designed to make the Israeli military that carries out atrocities
in Gaza — and the government that carries out the daily business of apartheid —
more oppressive and deadly for Palestinians.

That’s not hyperbole. Under Project Nimbus, the technology and infrastructure provided by Google and Amazon may make the data-powered surveillance of Palestinians more state-of-the-art. In addition, this cloud tech may build data capacity for the Israel Land Authority (ILA), the Israeli government agency that manages the expansion of illegal settlements and confines and segregates Palestinian communities.

Google and Amazon execs signed the Project Nimbus contract this past May as the
Israeli military leveled entire residential buildings and clinics in Gaza, and threatened to push Palestinian families out of their homes in Jerusalem.
We’ve seen this kind of thing before from Big Tech, though this is one of the more
flagrant examples. Just one example is ICE and police departments around the United States, who have used their data-maintenance contracts with Amazon to expand the immoral deportation machine and manage the surveillance of marginalized communities.

But we’ve also seen ordinary people and workers fight back and win against awful
Big Tech contracts like this and win before — and there’s every reason to believe
we can make Amazon and Google executives listen to those calling on them to be
on the right side of history.

Following in the footsteps of those who fought for divestment from apartheid South Africa and won, it’s our responsibility to say no to Amazon and Google’s powering of state violence.
We know that, together, we can win, too.

TAKE ACTION:
Stand with the Amazon and Google workers and Palestinian liberation.
Over 23,000 have taken action as of mid-November 2021 - JOIN THEM! Email the Google and Amazon CEOs. Let them know that facilitating apartheid is unacceptable:
#NoTechForApartheid
To send that message:
At this website, click the big yellow button:
"TAKE ACTION NOW"

News & Commentary
Some information will be repeated across these news outlets, but each of these items has some unique information or analysis.

We are Google and Amazon workers. We condemn Project Nimbus
The Guardian  •  12 Oct 2021
We are writing as Google and Amazon employees of conscience from diverse backgrounds. We believe that the technology we build should work to serve and uplift people everywhere, including all of our users. As workers who keep these companies running, we are morally obligated to speak out against violations of these core values. For this reason, we are compelled to call on the leaders of Amazon and Google to pull out of Project Nimbus and cut all ties with the Israeli military. So far, more than 90 workers at Google and more than 300 at Amazon have signed this letter internally. We are anonymous because we fear retaliation.
See more

Amazon and Google employees demand firms cut Israeli military contracts
Middle East Eye  •  12 Oct 2021
(Excerpt)
…..
Calls to support Palestinian rights
During Israel's offensive on the Gaza Strip in May, the two companies came under fire and were called upon by employees to terminate their contracts with the Israeli military.
The Israeli offensive killed at least 248 Palestinians, including dozens of children, and destroyed homes and buildings in the besieged enclave.
At the time, a group of Google employees sent a letter to the company's CEO, Sundar Pichai, to put out a statement condemning the attacks, including "direct recognition of the harm done to Palestinians by Israeli military and gang violence.”
Several days later, more than 600 Amazon employees sent a letter to CEO Jeff Bezos, urging the company "to commit to review and sever business contracts and corporate donations with companies, organizations, and/or governments that are active or complicit in human rights violations," including the Israeli military.
Another tech giant, Apple, was also called on to put out a statement and recognise that "millions of Palestinian people currently suffer under an illegal occupation.”
The calls from Amazon and Google, however, went unanswered, as the companies signed the Project Nimbus contract with Israel on 24 May.
See more 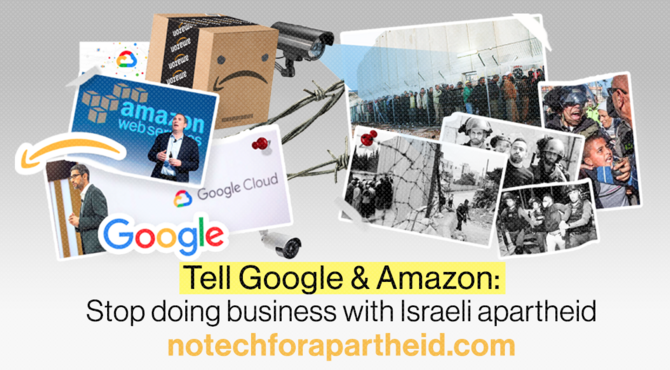 Amazon, Google workers call for termination of Israeli military contracts
The Hill  •  12 Oct 2021
By Chris Hills Rodrigo
(Excerpt)
…..
A spokesperson for Amazon's cloud unit, Amazon Web Services, declined to comment on the existence or content of the letter.
"AWS is focused on making the benefits of our world-leading cloud technology available to all our customers, wherever they are located," the spokesperson told The Hill.
The Hill has reached out to Google for comment.
Both companies have previously been hotbeds for worker organizing against controversial contracts.
Google ultimately terminated its contract to track individuals in drone footage for the Department of Defense, dubbed Project Maven, after internal opposition in 2018.
Workers at Amazon have called for the company to stop selling its Rekognition facial recognition software to law enforcement.
Despite internal opposition to working with police, military and immigration enforcement agencies, the country’s biggest tech companies have kept silently signing contracts by working through third parties.

Amazon and Google: partners in Israeli apartheid
Electronic Intifada  •  19 Oct 2021
By Jonathan Cook
The best-selling Irish novelist Sally Rooney is openly shunning Israel after recent reports from human rights groups warned that Israel practices apartheid, systematically oppressing Palestinians under its rule.
But while Israel risks becoming a pariah among some cultural producers, it is being aggressively embraced by globe-spanning corporations like Amazon and Google – among the wealthiest companies in history.
The two tech giants are not just lining up to do business with Israel. They are actively working to build and improve the technological infrastructure Israel needs to surveil Palestinians and confine them to the ghettos Israel’s army has created for them.
Through their collaboration on Israel’s Project Nimbus, both companies are helping to remove any pressure on Israel to make peace with the Palestinians and are instead becoming partners in Israeli apartheid.
See more

New Amazon & Google contracts with Israel betray company values, & workers like us
NBC News  •  12 Oct 2021
By Gabriel Schubiner, software engineer and researcher at Google, and Bathool Syed, content strategist at  Amazon
Early in our careers, we were thrilled to contribute to technology that could create new ways of engaging with one another, our devices and information around the world. Today, we work at two of the largest technology corporations, Google and Amazon. We joined these companies because we saw the huge impact that they have on people's lives globally, and because we believed that developing technology at such a scale could promote good and bring people together.
But we are not naive about the harm that technology enables. As workers, we are responsible for the
products we create. Because we believe that every person deserves to live with freedom and dignity, we’re calling on Amazon and Google to end their new contracts with the Israeli government and military, which violently oppresses millions of Palestinians.
See more

Inside Google, Jewish employees clash over Israel
The Forward  •  28 Oct 2021
“Jewglers” is one of many employee groups at Google, where there are also “Gayglers” (for LGBTQ+
employees), “Greyglers” (for older ones) and “Vetnet” (for veterans). The Jewglers’ 2,800 Jewish members mostly use its listserv to seek travel advice, share recipes and plan the company Hanukkah party.
But a progressive contingent cleaved off the group last summer after the Jewglers protested a company donation to the Movement for Black Lives. Now, a pair of letters from the breakaway group protesting Google’s business dealings with Israel has pitted the two Jewish bodies against each other in a fight for influence at the company.
See more

Earlier in the year...
Hundreds of Amazon employees call for Jeff Bezos and Andy Jassy to support Palestine
The Verge  •  25 May 2021
Employees want the company to terminate business contracts with organizations that are complicit in human rights violations, like the Israeli Defense Forces. In April, Amazon and Google signed a $1.2 billion cloud computing contract with the Israeli government.
The note echoes similar petitions from workers at Apple and Google. On May 18th, Jewish employees at Google penned a letter to Sundar Pichai calling for the company to “reject any definition of antisemitism that holds that criticism of Israel or Zionism is antisemitic.” Two days later, The Verge published a note from Muslim employees at Apple.
Muslim tech workers say executives have been slow to voice support for Palestinians, or condemn the violence in Gaza. Many feel their CEOs are choosing to ignore Israeli human rights abuses because the situation is fraught. The result, according to multiple sources, is that Muslims in tech feel undervalued and ignored.
Read the entire letter from Amazon employees below.
See more 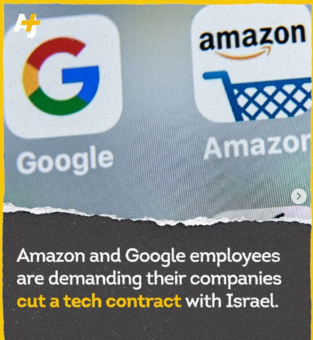 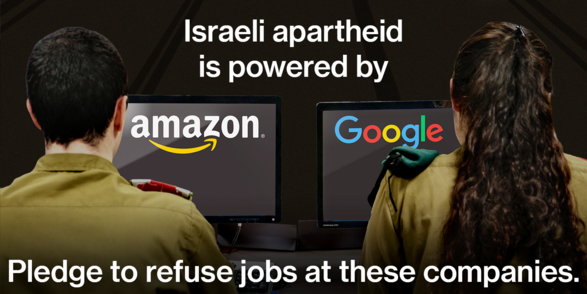