+972 Magazine:
Is Facebook about to crack down on criticism of Zionism?
Palestine advocates have long charged Facebook with suppressing criticism of Israel. Now they fear the company will escalate its censorship using a single keyword. See this

Jacobin Magazine:
Sorry, Anti-Zionism Still Doesn’t Equal Antisemitism
The struggle against Israeli apartheid has nothing to do with antisemitism — and everything to do with winning liberation for colonized Palestinians. See this

The Verge:
Facebook is getting pulled into a fight about the politics of Israel
There’s a growing debate over how moderators should treat the term ‘Zionist.'  See this

Mondoweiss:
Activists urge Facebook not to censor anti-Zionist content
If Facebook decides to equate ‘Zionism’ or ‘Zionist’ with ‘Judaism’ or ‘Jewish’, it would penalize any criticism of Zionist policies on the platform, a move that groups say could disproportionately effect Palestinians who criticize Israel’s policies in the occupied territories.  See this

UMKR participates in the global coalition for this campaign.
See the campaign website

What’s happening at Facebook?
Right now, Facebook is reaching out to stakeholders to ask if critical conversations that use the term “Zionist” fall within the rubric of hate speech as per Facebook’s Community Standards. Basically, Facebook is assessing if “Zionist” is being used as a proxy for “Jewish people or Israelis” in attacks on its platform.
This move is part of a concerning pattern of the Israeli government and its supporters pressuring Facebook and other social media platforms to expand their hate speech policies to include speech critical of Israel and Zionism.
Facebook says it will make a decision as soon as the end of February 2021.

Why is this happening?
The Israeli government and its supporters falsely claim that equating “Zionist” with “Jew” or “Jewish” will help fight antisemitism. In reality, they hope that that by mischaracterizing critical use of the term “Zionists” as anti-Jewish, they can avoid accountability for its policies and actions that violate Palestinian human rights.

Attempts to stifle conversations about Zionist political ideology and Zionist policies carried out by state actors — both of which have real implications for Palestinian and Israeli people, as well as Jewish and Palestinian people around the world — are part of an emerging pattern of political censorship by the Israeli government and some of its supporters.

SEE NEWS AND COMMENTARY ON THIS ISSUE & CAMPAIGN➨

What would the result be?
If Facebook does move to restrict use of the word Zionist, this would block important conversations on the world’s largest social media platform, harm Facebook users attempting to connect across space and difference, and deprive Palestinians of a critical venue for expressing their political viewpoints to the world.

What should Facebook do?
Facebook should allow us to hold governments accountable — not shield governments from accountability. It should refuse to cooperate with governments and politicians who are hoping to shut down our conversations and build more walls to keep us apart. That means Facebook should make sure we can discuss, debate, and even disagree about political ideologies like Zionism, about government policies and actions and accountability, and about our lives and families — as part of our commitment to safety for Palestinian people and Jewish people wherever they are in the world.

Learn more at the campaign's website
and while you're there, check out the Social Media toolkits

Watch the video of 52,000+ signatures on the "Facebook, We Need to Talk" Petition being delivered to 17 Facebook offices around the world:

You can still sign the petition! Signatures are still being collected - see the petition to Mark Zuckerberg and Sheryl Sandberg,  Facebook CEO and COO at the link below.  Use the orange button at the bottom of that page to sign it:
Go to the petition

Check back in late March and April 2021 for more action
on this campaign. 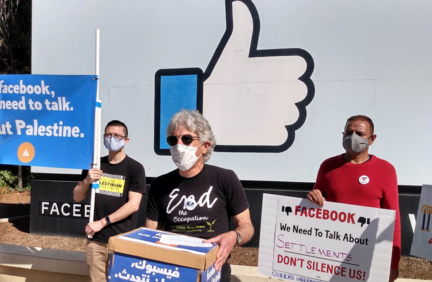