Nabil al-Kurd, a long-time resident of East Jerusalem stands next to a message that says “We will not leave” in Arabic (Middle East Eye/Aseel Jundi) 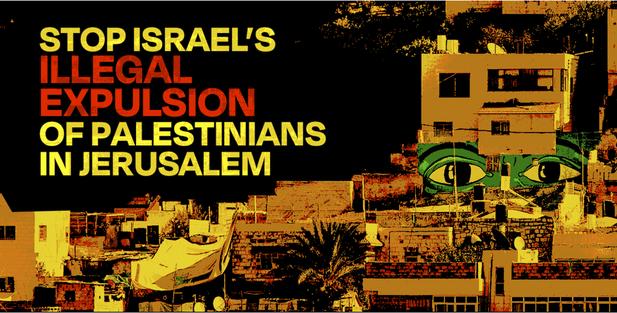 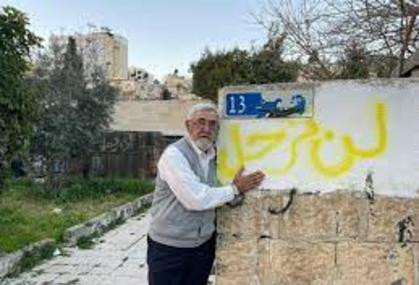 In early May, Israel plans to begin ethnic cleansing with forced expulsions and home demolitionis that could target well over 1,500 Palestinian residents in Sheikh Jarrah, Silwan and other historically Palestinian neighborhoods in occupied East Jerusalem.

This is part of Israel’s larger plan of racist colonial expansion throughout the West Bank including East Jerusalem, displacing Palestinian families from their land and homes and replacing them with illegal Israeli settlements.

Mohammed El-Kurd, whose family is among those threatened with eviction on May 2, has said ““What we are witnessing in Sheikh Jarrah is Israel’s attempt to erase the Palestinian presence from our native city in real time. This fate of dispossession looms over much of my neighborhood. Our lives are consumed by the anxiety of living on the brink of homelessness.”

See statements, news and more on the right  ➨

The expulsion of these Palestinian families is being spearheaded by colonial settler groups with the support of the Israeli government. Two of the primary settler organizations driving these evictions, Nahalat Shimon International and Ateret Cohanim, respectively are registered and have tax-deductible status in the United States, where they receive the majority of their funding.

Michael Lynk, United Nations Special Rapporteur on Human Rights in the Palestinian Territory, has publicly stated: “[t]he eviction orders are not random but appear to be strategically...aimed at clearing the way for the establishment of more illegal Israeli settlements and fragmenting East Jerusalem from the rest of the West Bank.”

Israel has been working to change the demographic makeup of occupied East Jerusalem for many years, using many methods, including force. But the current plans for this year would be a frightening escalation of that racist plan.

As it is the United States government that provides billions of U.S. tax dollars in annual military funding for Israel, the U.S. government has unique leverage with the Israeli government that it should use to stop this tragedy in Jerusalem from continuing.

A coalition of organizations across the US has been organizing several actions whereby people in the U.S. and around the world can call on President Biden, the U.S. Secretaries of State and Defense, and the U.S. Congress to intervene on behalf of these powerless families in Jerusalem and demand that Israel cease all plans for ethnic cleansing in occupied Palestinian territory.

An Urgent Call to His Holiness Pope Francis, the global ecumenical movement and World Council of Churches
Join the Palestinian Christians: Resist the Ethnic Cleansing of East Jerusalem
Your sisters and brothers in Palestine implore you to resist the State of Israel’s impending eviction of 15 families from their homes in the Israeli-occupied territory of East Jerusalem. Download it

Residents of Karm al-Jaouni live under the threat of forcible eviction that would see them replaced by Israeli settlers.
See this

Save Sheikh Jarrah: Palestinians have a right to remain on their land
As Israel continues its ethnic cleansing of Jerusalem's Sheikh Jarrah district, Palestinians are ramping up pressure on the international community to act.

Mondoweiss:
‘It is a Nakba’: Campaign to save Sheikh Jarrah builds momentum as forced displacement looms
In a matter of just two weeks, six Palestinian families, numbering 27 people, from the occupied East Jerusalem neighborhood of Sheikh Jarrah will be thrown out of their homes and into the street, and replaced with Israeli settlers. Now residents are doubling down on the campaign to #SaveSheikhJarrah. See this