see them all here

Resolutions for General Conference 2016
Four resolutions with varying approaches to divestment from the Israeli occupation have been passed by annual conferences and other bodies of the UMC and will be considered at GC 2016.
See the resolutions

Petition to the UMC General Board of Pension & Health Benefits
A petition for those who participate in the services of GBPHB - UMC clergy and employees - asking the board for occupation-free investments.
Read it and sign it_Is_Not_Enough

A great resource, our first Q & A  on the subject of church divestment from the Israeli occupation.
Read it

The Companies
Excellent research by United Methodists and allies such as Who Profits in Israel, about the companies that are supporting and profiting from the Israeli occupation. See also companies complicit in the Moroccan occupation of Western Sahara.

Learn more about the companies

Corporate Engagement
The history of United Methodist and ecumenical advocacy with Caterpillar, Hewlett Packard, and Motorola Solutions, the companies that have been the focus of much divestment advocacy in the UMC.
See the history

Why Divestment? Why Now?

An excellent article by David Wildman of the UMC General Board of Global Ministries, written in 2006 and still a timely statement for all United Methodists to see.
Read it 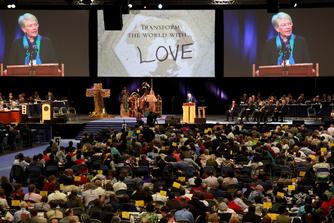 Why Divest from the Israeli Occupation

Divestment is a form of nonviolent moral action to change unjust practices. The United Methodist General Conference has long affirmed divestment as a legitimate tool for churches to use, both in our Book of Discipline and in our Book of Resolutions. It has been used effectively in the past.

In the 1980s, the UMC General Board of Pension and Health Benefits (GBPHB) divested $77 million from 17 companies doing business with South Africa. In the 1990's, the General Board divested more than 800,000 shares of Kmart stock over the issue of “adult” books carried by its Waldenbooks subsidiary. Both these actions reflected the church's unwillingness to profit from activities our denomination opposes.

For years, our denomination has opposed Israel's occupation of Palestinian land. In 1996,  the United Methodist General Conference declared that “continuing efforts by the State of Israel to build settlements in the occupied territories violate both international law and the spirit of the Declaration of Principles [the Oslo peace process].”

“The United Methodist Church opposes continued military occupation of the West Bank, Gaza, and East Jerusalem, the confiscation of Palestinian land and water resources, the destruction of Palestinian homes, the continued building of illegal Jewish settlements, and any vision of a 'Greater Israel' that includes the occupied territories and the whole of Jerusalem and its surroundings.”

The vote to affirm this in 2004 was 877-19.  This is still the position of our church today. This resolution was adopted with stronger language in 2012 - see "Opposition to Israeli Settlements on Palestinian Land."

Yet there are still companies in portfolios of GBPHB and other United Methodist agencies that profit from Israel's occupation.

It is time for United Methodists to put our words into action.

We need to make sure our church funds are not being invested in companies that profit from an occupation we clearly oppose.  In the words of Rabbi Brant Rosen,  "At the very least, will we be ready to put our money where our moral conscience is?"

¶716 Socially Responsible Investments– It shall be the policy of The United Methodist Church that all general boards and agencies, including the General Board of Pension and Health Benefits, and all administrative agencies and institutions, including hospitals, homes, educational institutions, annual conferences, foundations and local churches, shall, in the investment of money, make conscious effort to invest in institutions, companies, corporations, or funds whose practices are consistent with the goals outlined in the Social Principles; and shall endeavor to avoid investments that appear likely, directly or indirectly, to support racial discrimination violation of human rights, sweatshop or forced labor, gambling, or the production of nuclear armaments, alcoholic beverages or tobacco, or companies dealing in pornography. The boards and agencies are to give careful consideration to shareholder advocacy, including advocacy of corporate disinvestment.

Above: General Conference of the United Methodist Church 2012, Tampa, Florida

Only the UMC's General Conference, a legislative body that meets once every four years, can speak for the denomination or make amendments to the Book of Discipline. The next General Conference will be held in Portland, Oregon, May 10-20, 2016.