One of the most disturbing aspects

of Israel's military occupation is

the toll it takes on Palestinian

children growing up in this

The statistics are frightening: since

– tens of thousands of children – have

been been robbed of their childhoods,

and incarcerated, some for years, by the Israeli military.

On this page, you can learn the essentials on this subject, find resources to learn more, and how you can take action.

The No Way to Treat a Child (NWTTAC) Campaign

is a joint  project of Defense for Children  International – Palestine

It exposes the widespread and systematic ill-treatment of Palestinian children in the Israeli military detention system.

Several years ago, UMKR adopted the No Way to Treat a Child Campaign

as a primary focus of our work. Since that time, UMKR justice advocates have organized the passage of resolutions in many regions of the denomination, supporting the rights of Palestinian children and condemning their abuse and detention by Israeli military. Read more in our news report: 2018: The Year of the Child

In 2019, Rev. Dr. Susan Henry-Crowe, General Secretary of the UMC's General Board of Church and Society, joined over two dozen faith leaders in writing to Congress to express support for the landmark bill now in the House of Representatives: H.R. 2407 "Promoting Human Rights for Palestinian Children Living Under Israeli Military Occupation Act.”  See the letter herea

Click this link to see the letter followed by the option of signing on yourself, to support H.R. 2407!

Learn more about this important bill in the U.S. Congress, below and in the column on the right.

regularly asked to report to the United Nations. They have produced a major report,  on the treatment of Palestinian children in the Israeli military justice system for those living under occupation.
Read the short summary at DCI-Palestine 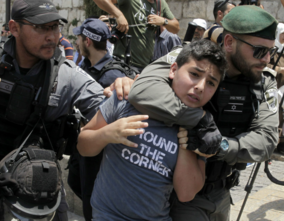 The United Methodist General Board of Church & Society (GBCS) was one of the earliest institutional endorsers of H.R. 2407 when it was introduced in Congress in 2019. Download the list of denominations and other groups that have endorsed, including UMKR (list current as of 16 May 2019). Or you can see the list farther down this page.

GBCS General Secretary Susan Henry-Crowe joined over 2 dozen Christians leaders in a letter to Congress in November 2019, supporting H.R. 2407. Christian faith leaders are invited to join in signing this letter.

Israel/Palestine legislation at UMC Annual Conferences in 2018 had an strong focus on Palestinian children's rights. See what was adopted

See the many faith-based actions supporting Palestinian children's rights and the No Way to Treat a Child Campaign.

This 45-minute film produced by a group of Australian journalists sparked an international outcry after it explicitly detailed Israel's use of torture against Palestinian children. The film documents how Palestinian children, who have been arrested and detained by Israeli forces, are subjected to physical abuse, torture and forced into false confessions and pushed into gathering intelligence on Palestinian activists.

• H.R. 2407 is the second piece of legislation introduced

by Rep. Betty McCollum (Democrat from Minnesota) that highlights ill-treatment against Palestinian children by Israeli forces.
• The groundbreaking legislation H.R. 4391, the

"Promoting Human Rights by Ending Israeli Military Detention of Palestinian Children Act," was introduced on November 14, 2017 and had support from 31 members of Congress by the

end of the 115th Congress.
• H.R. 2407 seeks to promote justice, equality and human rights for children globally by prohibiting any U.S. foreign military aid from supporting “the military detention, interrogation, abuse, or ill-treatment of children in violation

of international humanitarian law.”
• The bill amends the Foreign Assistance Act of 1961, commonly known as the ‘‘Leahy Law,’’ by adding a new subsection prohibiting U.S. military aid from being used by foreign armed forces to support the military detention, interrogation, abuse, or ill-treatment of children in violation

• The obligation is on U.S. actors to ensure no taxpayer

funds further these practices. Israeli authorities are free to continue using torture and the other prohibited practices

This resource explains more about what H.R. 2407

This video from Defense for Children International - Palestine, is 3.5 minutes long and shows footage of children being arrested by Israeli soldiers. It also gives us a chance to hear, in their own voices, Palestinian kids telling what happened to them, after they were taken by the soldiers. 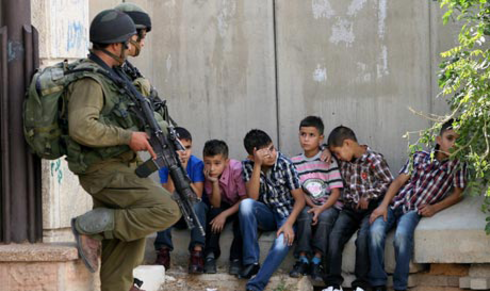 Addameer, the highly respected Palestinian organization that  advocates for prisoners' rights and protection, provides valuable information on  Imprisonment of Children at their website. 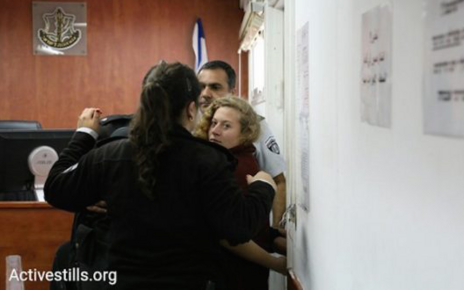 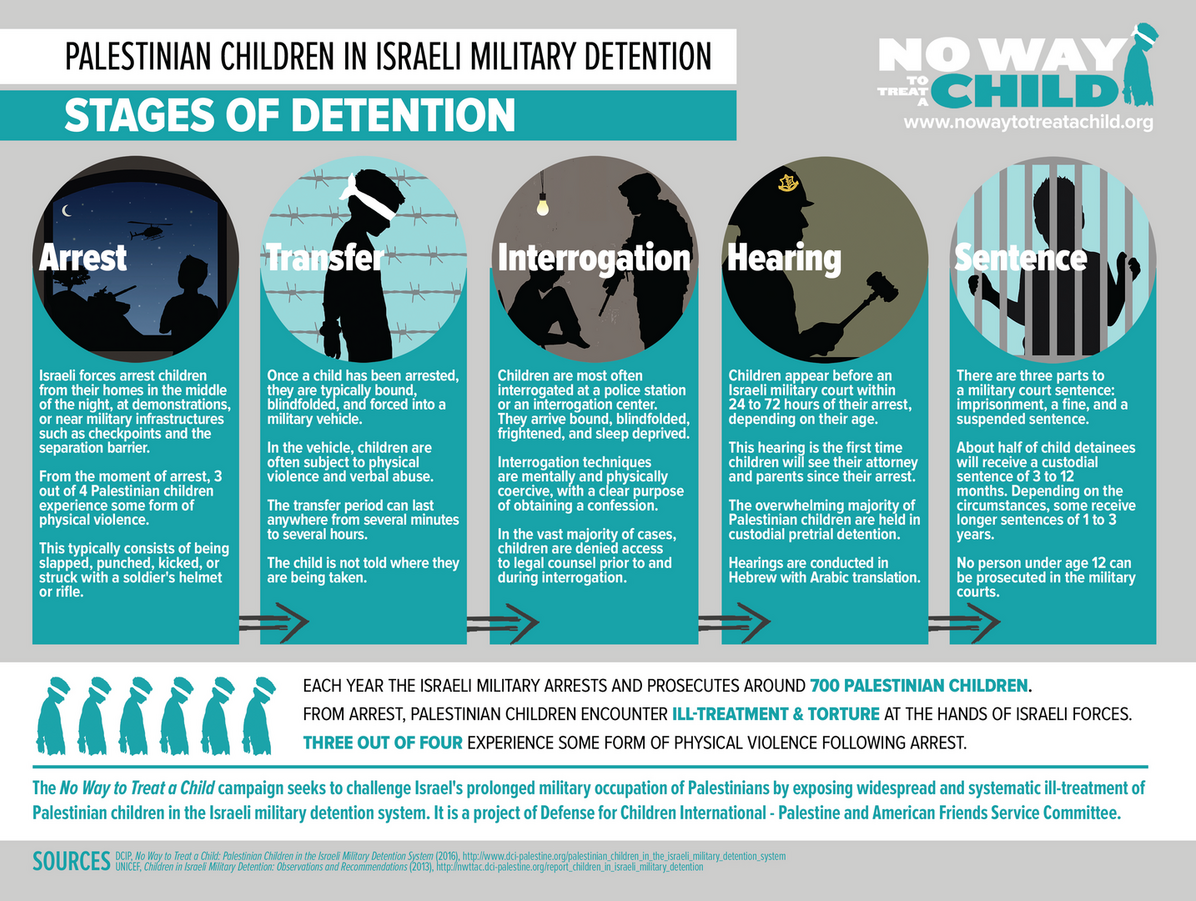 Some facts about Palestinian children in Israeli military detention

• Children make up around 45 percent of the 2.9 million Palestinians

living in the occupied West Bank, all of whom live under a separate

• Regardless of guilt or innocence or the gravity of an alleged offense,

world that automatically and systematically prosecutes children in

Israel prosecutes between 500 and 700 Palestinian children in military courts each year.

• Children often give confessions after verbal abuse, threats, physical and psychological violence that in some cases amounts to torture.

• Nearly three out of four Palestinian children experience some

form of physical violence after arrest.

• Palestinian child detainees have no right to an attorney during

interrogation under Israeli military law, and 96 percent of children have no parent present during interrogation.

• Israeli military law provides no right to legal counsel during

confessions obtained by coercion or torture.

Use it at your church, community center, or school.

▶︎  For those in the U.S.: Contact your Representative in the House and uge them to

Al-Jazeera does an excellent job of reporting on the military detention and court system for Palestinian children. The enlightening 6 minute video above accompanies the article "A system of control" in the right column on this page.

This short film (7 minutes) from DCI-Palestine puts all its focus on one young man, Obaida, who had been arrested twice by soldiers by the time he was 15. Hear his moving story in this video or learn about his experiencein this article: Israeli Prisons Rob Palestinians of Their Childhood.

A 'system of control': Child detention in the occupied West Bank – Al Jazeera

At the end of 2017, during widespread protests against US President Donald Trump's recognition of Jerusalem as Israel's capital, two Palestinian teenagers had run-ins with Israeli soldiers that went viral.

Fawzi al-Junaidi was pictured blindfolded and surrounded by over 20 Israeli soldiers, his arms locked behind him as he was dragged away.
The 16-year-old spent three weeks in detention and was released on bail, bruised and with a dislocated shoulder.

Ahed Tamimi was also 16 when she was arrested at her home in the middle of the night by Israeli troops in riot gear. She turned 17 in an Israel detention facility, where she's been held since December 19.

While Fawzi and Ahed have become symbols of Palestinian resistance, they're also minors navigating a military detention system that's been repeatedly accused of systematic abuse. See the article

A few weeks ago, a Palestinian teenager was shot and seriously injured by Israeli soldiers as he attempted to flee their custody — despite the fact that he was already handcuffed and blindfolded. Osama Hajahjeh, was among a group of Palestinian youths who were arrested for throwing stones at Israeli soldiers in the West Bank village of Tuqu’.

“The situation on the ground in the Occupied Palestinian Territories, with more than five decades of Israeli military occupation, is that of a perpetual human rights crisis with severe impact on children’s rights, who are victims of unlawful killings, arbitrary detention, and
collective punishment policies such as home demolitions,” Saleh Higazi, deputy regional director for the Middle East and North Africa at Amnesty International, told me.  See the article

A report published by Israeli human rights group B’Tselem on Tuesday argues that these socalled improvements have improved very little. The juvenile military court system system, which uses the tactic of denying bail to pressure over 70 percent of juvenile defendants and
their families into accepting plea bargains, has a startling conviction rate....

April 2019 — According to figures released by the Prisoners’ and Freed Prisoners’ Committee of the Palestine Liberation Organization (PLO) on Sunday, the state of Israel has imprisoned more than 50,000 children since the occupation of Palestine’s West Bank began in 1967. The PLO report, which was cited by Middle East Monitor, also noted that around 17,000  of those child arrests had occurred since the year 2000. See the article

According to Addameer's lawyer, Farah Bayadsi: "When it comes to arbitrary detention, the police have some information that the children did something, but not enough to put them on trial. The children don't get charged; they are just being investigated and then released," Bayadsi told Al Jazeera.

"Sometimes, they ask them about others - other children or adults.

It's a collective punishment for the children and a way of gathering information about everyone. But no matter if you put the child in a police station for one hour or one week, it will still affect him."

New House Bill Would Bar Israel From Using U.S. Military Aid to Detain Palestinian Children
“Progressive values demand freedom, justice, and equality for all people and across all issues, and we commend Rep. McCollum for putting hers into practice,” Yousef Munayyer, director of the U.S. Campaign for Palestinian Rights, said in a statement. “For too long, Congress has given Israel a blank check even as it has entrenched its brutal military occupation and escalated human rights abuses against the Palestinian people. H.R. 2407 is an important step toward demanding accountability and sending a stern message that the American people do not want their tax dollars being used to deprive Palestinian children of their rights and childhoods.”  See the article

ABOVE:This 1 minute video from AFSC, a Quaker organization, provides an introduction to this subject that includes information on a bill in the U.S. Congress:
H.R. 2407.

the human rights abuses that go with that occupation.

Ending US funding for those abuses should be a subject

of interest not just for American citizens but for everyone in our global church and all supporters of human rights.

SEE MORE VIDEOS BELOW ON THIS PAGE

From US Campaign for Palestinian Rights: less than 90 seconds long, this quiet yet dramatic video asks Americans to think about what their tax dollars are paying for. 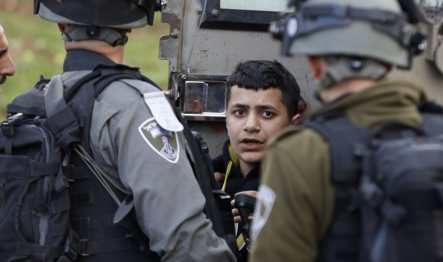