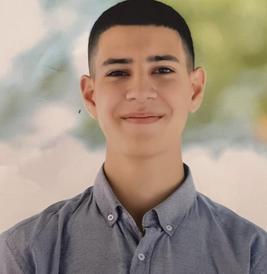 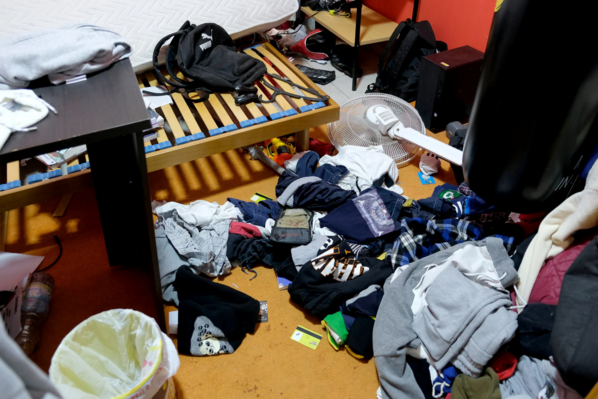 Bloodstains and Destruction at This Palestinian Home Tell the Whole Story

​Police raided the East Jerusalem neighborhood of Beit Hanina to arrest Shadi Khoury. When the 16-year-old refused to disrobe in their presence, he was beaten in front of his parents, then taken away. No one told the parents – who both run local cultural institutions – why their son was arrested.

Shadi Khoury's mother, Raina. (Credit: Alex Levac)
​He began screaming as he was beaten. His mother tried intervening: "He’s a boy, give him two minutes to get dressed." Nothing helped.

Blotches of blood streak the spacious, elegant mansion. Wherever the police dragged their victim, he left behind a narrow trail of drops of blood, drop after drop, as though to mark the path of the arrest and the beatings. The boy screamed; the neighbors heard his shouts and were terrified.

Beit Hanina is an affluent and relatively quiet neighborhood, and it’s not every day that violent events like this occur there. The youth involved, Shadi Khoury, lives with his parents and older brother in a family compound on a street that bears the name of one of the family’s forebears, Yusuf Khoury, the engineer who founded the street and this handsome group of homes on the northern slopes of Jerusalem.

Everything is stained with blood. The rug in his room, the marble floor in the corridor, the stairs, the yard, the garden and the street, even a paper ticket on his table is bloodied.

When we arrived, a few hours after Shadi’s brutal arrest, this past Tuesday, the blood hadn’t yet dried and the family was distraught. Shadi Khoury, 16, an 11th-grader at the Quakers Friends School in Ramallah, was forcibly taken into custody, barefoot and in his pajamas. When the police ordered him to get dressed, he refused to disrobe in front of them and requested them to leave him momentarily in his room, whose windows are barred. In response, the officers started to beat him savagely – four hooligans in black, hunched over a terrified youth and pounding him with their fists, on his head, his face, his chest. All while his parents watched, appalled, unable to come to the aid of their son. Imagine if it was your children.

Early Tuesday morning, I got a phone call from Lora Khoury, a 91-year-old woman who reads Haaretz and occasionally calls to comment, but who this time was overcome with emotion. Her neighbors’ son – they are her relatives – had been arrested before dawn, and she heard his screaming in her home, a luxurious structure a few houses away from theirs.

“They come to make an arrest, so why do they hit people? What kind of army and what kind of police did you create for yourselves?” she asked in her excellent English. When we arrived, this elegant woman was waiting for us at the entrance to her house and she led us to Shadi’s home. This is an attractive compound of several stone homes owned by the extended Khoury family and other families, amid well-tended gardens and paths, shaded by pine and olive trees. The wealth and the stylishness are apparent, but understated.

It’s not clear where Shadi bled from, but later that morning, after his arrest, the stains and drops remained everywhere. (Credit: Alex Levac)

The way to Shadi’s room is dotted with his blood, and the room itself is in a state of chaos following the violent police search. Everything is scattered on the floor in this teenager’s room – clothes, books, among them textbooks about film, history and literature; the posters have been ripped from the walls. The raiders hurled the standing fan and mattress onto the floor, and then jumped on the wooden bed frame until it broke, according to the parents who were present.

In the living room is a large library, the furniture is European in design, refined. A framed, American-style wedding photo stands on a chest; it was taken at the wedding of Shadi’s sister, Zeina, in the Catholic church in Jericho, three years ago. Shadi is standing on the right, in a black suit and a bow tie. He’s the youngest child of Rania, the director of the Yabous Cultural Center in East Jerusalem, and Suhail, a composer and musician and the general director of the Edward Said National Conservatory of Music, also in East Jerusalem (it also has another four branches). The couple have three other children: another son, Yusuf, 18, who this year began architecture studies at Bir Zeit University; and two daughters – Rand, 21, a musician who is a veterinary student in Hungary; and Zeina, a musician who is the director of the Palestine Youth Orchestra and is holding her newborn baby when we visit.

On Monday this week, Shadi went to sleep around 11 P.M. “He has school,” his mother says. “Had school,” a relative corrects her. Everyone in this house, whether elderly or young, speaks fluent English.

At 5:45 A.M. on Tuesday the family awoke to pounding on the door and incessant ringing of the doorbell. Together with their German shepherd, the parents, in their pajamas and groggy with sleep, opened the door, with Shadi and Yusuf standing behind them. The callers were six black-clad, armed police officers, who ordered them to remove the dog. They had smashed the parking barrier on their way into the compound and had tried to get to the main entrance of the house, but it is accessible only with an entry code, so they came in from the back, entering the stairwell.

“Who is Shadi?” they asked. “You? Yalla, you’re under detention.”

They told the family to take them to Shadi’s room, into which the men in black now squeezed, along with the teenager and his parents. Suhail asked to see an arrest warrant; they showed him a document in Hebrew, which he can’t read. “And do you have a search warrant?” he asked. One of the officers in black replied, “We have a warrant for everything.” The parents tried to argue that the 16-year-old had the rights of a minor, to which the reply was, “We know the law. Don’t teach us.’

They demanded Shadi’s cell phone, he said he would give it to them but wouldn’t unlock it. They then ordered Shadi to get dressed in order to be taken into custody, but before putting on his underwear he had to take off his pajamas. He refused to undress in their presence. The officers began shouting, before knocking Shadi to the floor, at which point four of them began to pummel him. Four against one.

“Don’t worry,” they told Shadi’s mother, “we’ll strip him in the interrogation, he doesn’t need clothes.”

Shadi started to scream, they went on beating him. His mother tried to intervene: “He’s a boy, give him two minutes to get dressed.” Nothing helped.

He was dragged outside, in his bare feet. On the street were Border Police vehicles and other officers. Shadi hands were bound behind his back, and he was blindfolded with a rag – standard procedure. He went on screaming. His parents are certain the officers went on hitting him in the vehicle.

It’s not clear where he bled from, but later that morning the stains and drops remained everywhere. The force left with their booty. They told the parents that they were taking him to the detention facility in the Russian Compound, in downtown Jerusalem. Suhail left immediately in the wake of his son; Rania was afraid to go outside – she doesn’t have a residency permit in her city.

On July 22, 2020, units of the Israel Defense Forces had invaded the two cultural institutions that Suhail and Rania manage, confiscated equipment and shut them down. That was preceded by the arrest of the two parents in their home – the same house they raided this week to detain their son. The couple was released after being questioned about the cultural centers they run and their sources of financing, but Rania’s temporary-residency permit, which she received within the framework of a family unification request, was revoked, and since then she has been waging a legal struggle to remain in her home.

Rania was born in Bethlehem, and since 1998 she has been living in Jerusalem with her husband and children, on a temporary permit. She appealed the cancellation of the permit through the Hamoked Center for the Defense of the Individual, and her expulsion was suspended until the conclusion of legal proceedings. Now she’s reluctant even to go into the street, fearing she will be expelled. She can’t visit her family in Bethlehem, because she might not be allowed back in, and they can’t visit her, because they don’t have entry permits for Jerusalem. After the interrogation and the shuttering of the institutions – they have since reopened – Suhail wrote an article and posted it in the social media with the headline, “We love Beethoven.”

After Shadi was taken into custody, the men in black uniforms returned to his room and started to poke around and to dump everything on the floor, breaking the bed frame. “That’s the story of our life,” says 91-year-old Lora, who has seen everything.

A police spokesperson this week stated in response to a query from Haaretz: “This is what a distorted description of reality looks like. The suspect was arrested on suspicion of his involvement in a serious violent event in which Jewish vehicles were attacked and stoned in Beit Hanina last week. During his arrest, [which was backed] by a court order, he attacked the police officers with his fists and by kicking, and he pushed, went wild and tried actively to prevent the execution of the arrest.

“The members of his family who were in the house at the time also tried to thwart execution of the arrest. As a result of the suspect’s grave and unacceptable behavior, the police officers were compelled to use force in order to subdue him, stop the attack on them and complete the execution of the arrest. Following his arrest he was taken for questioning by the police, and he will be brought to court for a remand and for the full course of the law to be taken against him.”

One’s heart goes out to the naïve and innocent guys in black from the Israel Police. A boy of 16 “attacked” them, they say – and his father, the composer, and his mother, who runs a cultural center, also joined in. And maybe Lora, the elderly neighbor and relative, also took part in the wild attack on the keepers of the law. A brief acquaintance with the occupants of this house is sufficient to grasp how ludicrous the claims of the police are.

Around dusk on Tuesday, Shadi was ordered remanded for 48 hours. All that day his father stood on the street, outside “Room No. 4,” the notorious interrogation facility in the Russian Compound in downtown Jerusalem, to which Shadi was taken.

When asked on Thursday for an update on her son’s situation, Raina Khoury reported that her husband and the other children had had been in court that day when Shadi’s detention was extended through Sunday, a decision his lawyer is appealing. “I’ll keep you posted,” she said. 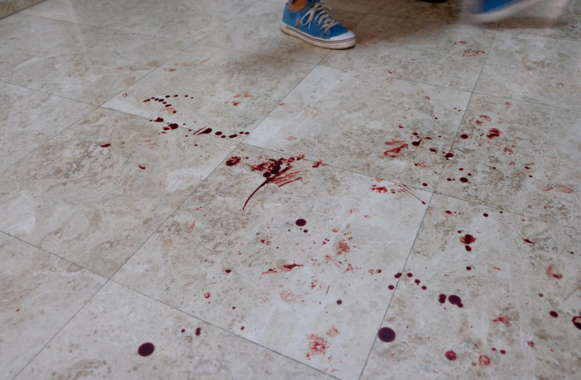 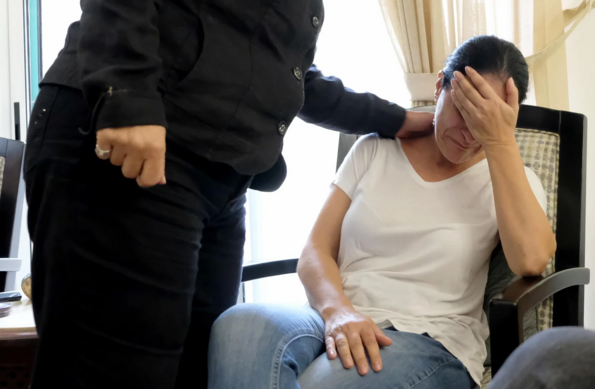