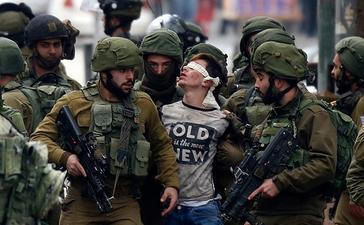 2018: The Year of the Palestinian Child

July 2018 – Some folks think that our church resolutions on social issues - from same-gender marriage to a moral budget to Palestinian rights - are just church people talking to themselves. That they have no impact outside the church. Especially if they happen in annual (regional) conferences, rather than the denomination-wide General Conference.

Resolutions in our annual conferences have impacted pending state legislation, inspired national editorials, and changed the social discourse on some of the most important issues of our time. They can also influence church policies that affect the whole denomination. Case in point: The Social Values Choice suite of funds developed by Wespath, our church's Board of Pensions, which they have said is a response to the many annual conference resolutions that have called for divestment from the Israeli occupation and have targeted three companies in particular: Caterpillar, Hewlett Packard, and Motorola Solutions.

That's why UMKR focuses much time and energy on this tool for advocacy in our church, spending months each year developing resolutions and supporting resources that we can provide to our network of activists. This year was no

exception and the results were gratifying.

UMKR activists spearheaded the adoption or

renewal of 11 resolutions related to justice

The biggest topic by far was Children:

8 of those 11 resolutions focused on the

human rights of Palestinian children and

their abuse in Israeli military detention.

The West Virginia, Western Pennsylvania and East Ohio conferences were big break-throughs this year in United Methodist organizing for Palestinian rights. For each of these annual conferences, this was their first time adopting such legislation. West Virginia passed “Advocating for Children’s Rights under Israel Occupation,” Western PA adopted the resolution on “Child Incarceration” and East Ohio passed the resolution on “Protecting the Right to Peacefully Address Injustice” which protests U.S. legislation that would penalize Americans who support Israel-focused boycott and divestment campaigns.

Along with West Virgnia and East Ohio, other annual conference that spoke up for Palestinian children: Western Michigan and Oregon/Idaho (they had 2 resolutions each on child incarceration), Minnesota, Upper New York, and California-Nevada.

We have to give a shout out to Oregon-Idaho activists, who had a busy and remarkable 2018 conference legislative session. Their conference adopted or renewed four Palestine-related resolutions in all!

See the resolutions and resources that UMKR provided for our activist network this year.