Dec. 2016 – Please note that this article has been updated with UMKR's new name: United Methodists for Kairos Response.

Hind Khoury is a Palestinian Christian, an economist, and the newly appointed General Secretary of Kairos Palestine, which includes representatives of nearly all the Christian denominations in Palestine and Israel. Ms. Khoury served as Minister of Jerusalem Affairs with the Palestinian Authority and was appointed as the Ambassador of Palestine in France where she served until 2010.

Retaining hope in the face of despair:

an evening with Hind Khoury
by Anonymous

Having never met a former Ambassador, we

weren't sure what to expect. My friend and I

were early arrivals alone in the sanctuary at

Dumbarton UMC in Washington, D. C. on a

walked toward the chair from which she would

speak, she stopped at our pew and said

In spite of jet lag and meeting overload during

time to speak with us; wanting to understand

why we had driven two hours to meet her. She

humbly expressed wonder that people not of

Palestinian descent are so passionately involved

in the Palestinian cause.

The reason for our passion was confirmed as

Ms. Khoury began her talk. "I'm a Bethlehem girl," she said. "where every day is Christmas, with a renewal of joy and hope, but in the last three years, I can't find this joy. The major problem we face is the loss of hope." Time is running out for Palestinian Christians. Many who visit their beautiful land and have heard their stories return home full of outrage.

Ms. Khoury was gracious and soft-spoken but beneath her calm manner were disturbing words: “Israeli policy is meant to push Palestinians to despair. The occupation is shameless. Israeli settlers are fanatics. They call us serpents and cockroaches. Last month they torched a home, killing a baby, a father, a mother. They burn ancient olive groves and cars, they attack villages. They and act with impunity. Our water supplies and our agricultural land are being stolen. The Wall has created disconnected villages. Beit Jala, a Christian town near Bethlehem has lost 48% of its land. Palestine is weak; Israel is a nuclear power. We need your help." This is a plea that Christians in the West can't ignore. In September, there was more destruction of Bethlehem land.

A professional economist, Ms. Khoury spoke from her expertise about the Palestinian economy. Palestinians are an entrepreneurial people, yet it is difficult for them to succeed in an economy so weakened by occupation. In the face of 500 military checkpoints, separate road systems, sporadic electricity and restricted water on their tiny allotment of land, it is nearly impossible to engage in competitive trade. However, for Israel, she pointed out, occupation is an economic venture, at the expense of the Palestinian people.

Ms. Khoury’s work is focused on the "Kairos Palestine Document - A Moment of Truth: A Word of Faith, Hope and Love from the Heart of Palestinian Suffering," issued in 2009 by Kairos Palestine and signed by 3,000 Palestinian Christians. They name the occupation as a sin. They ask Christians around the world to stand with them or risk losing the heritage of the early Christians. The theological and economic document encourages us to boycott and to divest from companies whose products sustain the occupation.

Despite this ongoing situation of hardship, Palestinians somehow do hold onto hope, illustrated by many forms of peaceful, non-violent resistance. The occupation will end one day. Palestine's Christians rely on their brothers and sisters around the world to point out injustice wherever they find it. Ms. Khoury is encouraged by today’s Palestinian young people, who are serious, focused, and working for their futures.

For United Methodists steeped in justice and equality, how can we not respond? Nearly 50 years of occupation continues unchecked. After returning from a life-changing visit to the West Bank I felt a spiritual call to this compelling cause that deeply moves me anew each day. At General Conference 2012, I found like-minded folks in an international grassroots peace movement called United Methodists for Kairos Response that is working hard to end the occupation through education, and by advocating for authentic Holy Land travel, boycott, divestment and policy change. At General Conference 2016 we will be advocating for divestment and continued boycott in response to Ms. Khoury’s plea to help Palestinian Christians. In D.C. on Monday night I was thrilled to meet one who inspires us and to be part of delivering a little slice of hope from those she challenged to act courageously and prophetically.

*Lisa Bender is Chair of the Divestment Committee for United Methodists for Kairos Response (UMKR), and a member of Shopes United Methodist Church, Hummelstown PA in Susquehanna Conference. Reach her at lbender@susumc.org. Contact UMKR at info@kairosresponse.org. 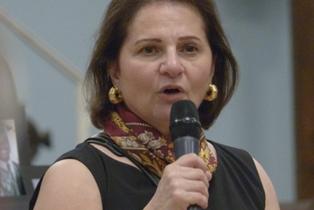