H.R. 2590 would ensure that our taxpayer dollars aren’t used by the Israeli government to imprison and torture Palestinian children, destroy Palestinian homes and property, or further annex Palestinian land to Israel.

It was introduced on April 15th with 13 original cosponsors. As of August 24th, the bill had 29 co-sponsors and that will keep growing.

When it was introduced, the bill was quickly endorsed by over 70 organizations including United Methodists for Kairos Response (UMKR) and the General Board of Church & Society (GBCS) of the United Methodist Church.

First endorsers also included many of our well-known partners in the Palestinian rights movement, such as Defense for Children International- Palestine (DCIP, US Campaign for Palestinian Rights (USCPR), American Muslims for Palestine (AMP), American Friends Service Committee (AFSC), and Churches for Middle East Peace (CMEP). There were also many groups that organize on a range of social justice issues, such as Black Lives Matter, United We Dream, and the Working Families Party.

The introduction of this legislation demonstrates the strength of the Palestinian rights movement. This bill, which could not have been imagined in Congress a decade ago, has grown from the No Way to Treat a Child campaign, which has been led by Defense for Children International-Palestine (DCIP) and American Friends Service Committee (AFSC), and from the consistent advocacy of so many caring people across the U.S., including thousands of United Methodists.

As we know, the Covid-19 pandemic has exposed systemic injustices across the globe, intensifying the harms that come from state violence and discrimination. This is also true in Israel/Palestine.

During the pandemic, the Israeli government has continued to imprison Palestinian children under a military court system, putting them in grave danger of contracting COVID and separating them from their families.

At a time when Palestinians have been asked to stay at home, the Israeli government actually increased the rate at which it is demolishing Palestinian homes.

The criminal violence of Israeli settlers against their Palestinian neighbors has increased notably, often with the protection and sometimes the assistance of Israeli forces.

We need many more members of Congress to stand up for the human rights of Palestinians.The taxes paid by Americans should not be bankrolling Israel’s violent oppression of Palestinians. This bill is how we start holding the U.S. accountable for where we put our money.

For those with a U.S. address:

Urge your legislators to support HR 2590 in the House of Representatives and to introduce or support a companion bill in the U.S. Senate.

See more about this bill in the column on the right »» 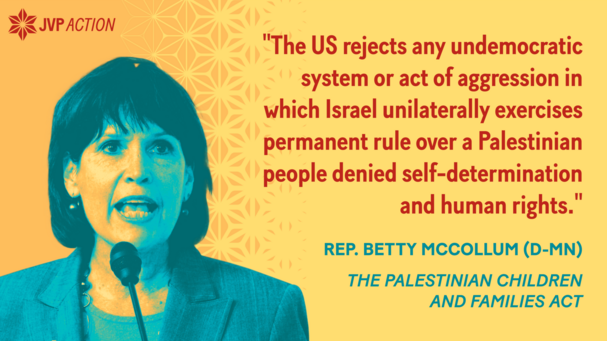 My Bill Would Stop US Aid From Funding Palestinian Suffering

by Betty McCollum  See this

by Josh Ruebner  See this

JVP Action Handout on HR 2590, one page
Great to use when visiting legislators and in many other ways
Download it

Congress.gov
The full text of HR 2590, the current co-sponsors, the actions taken in Congress and more  See it all