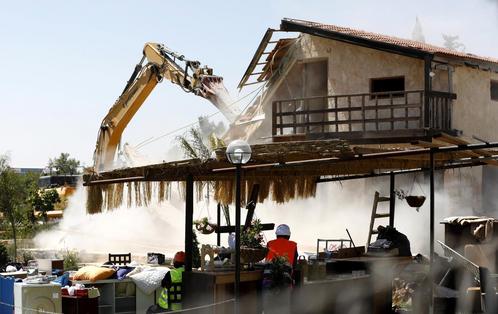 From Kairos Palestine in Bethlehem

September 2019 _ Everywhere, and throughout the occupied Palestinian Territories, the Israeli authorities demolish the houses of Palestinians, which the international law stipulates that they be protected and preserved by the occupying authority. In violation to the said law and to implement colonial plans, the Israeli authorities demolish houses, confiscate lands and build settlements on their ruins.

In 2018, the Israeli authorities demolished 2775 Bedouins’ houses in the Negev. People resisted such measures and had their homes rebuilt. The town of al-Araqib, for example, was demolished and rebuilt 145 times. The Jahalin Bedouins of East Jerusalem have suffered a similar ordeal.

In Sourbaher, east of Jerusalem, dozens of houses that existed for years were demolished weeks ago. In Jerusalem, houses have been demolished under the pretext of not having a building permit, or with the intention of displacing the Palestinian population and Judaizing the Holy City. Very recently, a house and a restaurant of a Christian family, in Beit-Jala (Bethlehem area), were demolished according to an arbitrary court decision. The court ruled that the land of this Christian family, inherited from their ancestors, through generations, was not their own. It ordered that the house and restaurant be demolished and the property transferred to the settlers.

Justifications for such actions may include: Violating the laws of the planning department, lack of building permits, or reprisals against individual Palestinian militant attacks on Israeli targets. Indeed, the Israelis impose collective punishment on the families and relatives of militants by demolishing their houses.

A family house is sacred as much as the family. It is a sacred place exactly as a place of worship. People work hard and for their entire life to have their own house built. Yet, it is demolished simply because of an arbitrary and inhumane military decision. The Israelis build settlements in violation to international laws, to the law of nature and to God’s commandments. God said: do not steal. The settlers law says: steal any Palestinian land to build a settlement. Indeed, the houses of settlers are constructed on confiscated i.e. stolen Palestinian land.

We are aware of the fact that we are addressing people with a hard heart, when it comes to the demolition of Palestinian houses. Hearts as hard as their bulldozers that demolish constructed Palestinian houses, resulting in the displacement of thousands of people and depriving them from a home. Their main goal is to compel Palestinians to go away, in every possible way. Houses’ demolitions are one way. Our only sin is that we are in our houses and our land. Their real wish for us is not to exist.

The strength of the weak confronting the oppressor is simply in their natural rights, in remaining steadfast even on the ruins of their houses and against the will of those who wish them to go or not to exist.

The weak’s strength is in God, as says the Psalm: “The needy is not forgotten forever, not for ever does the hope of the poor come to nothing (Ps 9:18), and also: :For he rescues the needy who calls to him, and the poor who has no one to help. 3 He has pity on the weak and the needy, and saves the needy from death” (Ps 71: 12-13).

Israel’s survival depends on justice and peace. The power of injustice and weapon does not guarantee survival, nor does it work in confronting people living in their land and homes. Demolition of Palestinian houses and racist statements on the part of some Israeli officials or rabbis are lately getting aggravated. Such racist statements are being instilled in the mind of young generations. The only way for Israel’s survival is justice, and respect of the indigenous owners of the land, whatever has been the history.

We address the state of Israel with a genuine word of truth: It is God's law that preserves and protects, but laws of demolition can only lead to the demolition of the lawmaker himself. Israelis should always remember that they are the creation of God, and that Palestinians are the creation of God too. In order to guarantee their security, future and survival, Israeli’s must deal with Palestinians on the basis of the God given equality and dignity.