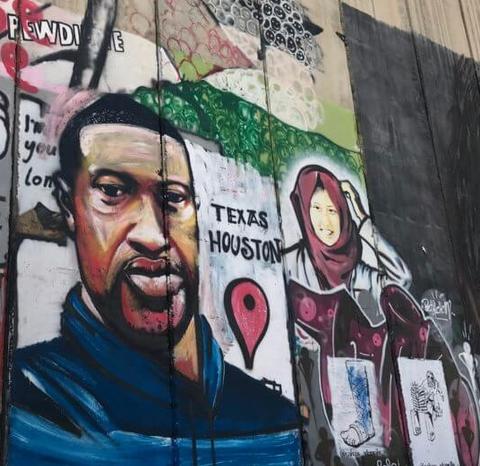 The ADL the Anti-Defamation League. This graphic is from the Deadly Exchange Campaign of Jewish Voice for Peace. Learn more about it: https://deadlyexchange.org/ 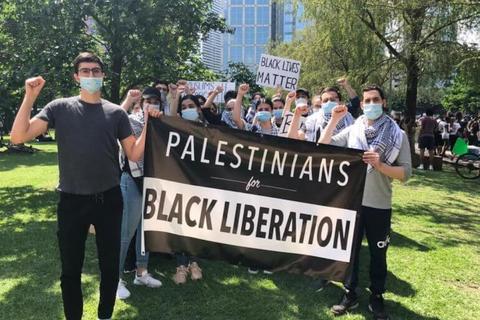 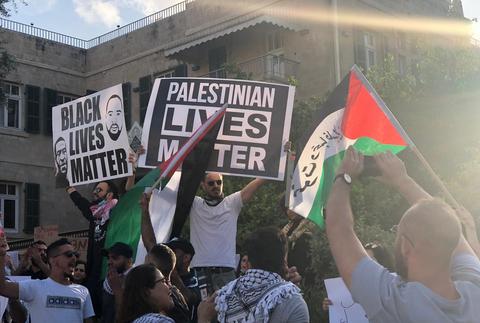 Demonstration in Haifa, Israel on 2 June 2020

We can’t breathe until we’re

in Palestinian society that leads the

in solidarity with our Black brothers and

sisters across the US who are calling for

justice in the wake of the latest wave of

Americans, including George Floyd in

and Breonna Taylor in Louisville.”
…..

“The genocidal destruction of native American nations, the pillage of their wealth and resources, and the savage enslavement of millions of Africans constitute the most profound pillars of what became the US. The deeply-seated white supremacist ideology that has guided and attempted to whitewash these crimes is still alive, albeit in different forms. This exclusionary ideology is encouraged by the flagrantly racist Trump White House and an insidious, less-audaciously racist liberal establishment that rhetorically condemns racism, even spews some empty promises, yet consistently fails to act on reparations, racial and economic justice, and ending the horrific system of criminalization and mass incarceration of Black Americans.”
…..
“We call on the Palestine solidarity movement in the US and elsewhere to stand with the Movement for Black Lives and other Black-led organizations in their righteous struggle for justice, and for an abolitionist approach to police reform, reparation, and liberation. We endorse calls for targeted and strategic boycott, defunding and divestment campaigns against institutions, banks and corporations that are implicated in the system of racial injustice.”
…..
“The system of structural racism in the US is violently enforced by paramilitary police departments, many trained by Israel, including the Minnesota police. These police forces have been tasked with doing whatever it takes to protect this rotten system of white supremacy and Black, Latinx and Indigenous disenfranchisement.”
See this powerful statement in full
____________________________________________________________________________________________________

Black Lives Matter: A Declaration of Solidarity
by Kairos Palestine

Kairos Palestine expresses its unequivocal support for the Black Lives Matter movement and everyone working for racial justice in USA, the demands of which have resonated in communities around the world. The movement has opened an opportune moment—a kairos moment—for citizens in the United States and people of faith and civil society around the world to name and address places of systemic racism, economic inequality, food deprivation, lack of access to health care, and state-sanctioned violence that strip human beings of their dignity, equal rights and far too often their lives.

We invite you to join us as together:

· We listen and learn from our Black and Brown brothers and sisters;
· We lament that Black Americans and people of color daily endure injustice and discrimination, police brutality, and systemic racism;
· We confess and repent of our share in the brokenness that divides humankind;
· We renew our commitment to work for the freedom and wholeness of all people;
· We bind ourselves anew, like leaders in the Black Lives Matter movement, to a resistance grounded in the power and logic of love that seeks to liberate both the oppressors and the oppressed in our own context and around the globe.

We give thanks for the many expressions of Black-Palestinian solidarity over decades. The oppression of both our peoples is rooted in the sin of settler-colonialism and the disinvestment of resources in the wellbeing of our people and communities. So we embrace the Black Lives Matter movement as a moral one— its importance, its growing strength, its successes and its unmet demands. And we look forward to opportunities to join in the work of other diverse communities to realize the value, the humanity and the
rights of all people to justice and peace.

Palestinians In Solidarity With African Americans
Statement signed by Palestinians around the world
EXCERPTS:

“We understand that violence against Black bodies is endemic in the United States. And, in fact, anti-Blackness has been a mainstay of the nation’s political, economic and social structures since its inception. We also recognize that the struggle for Black liberation is the single most important force to shape the features of justice and democracy in the United States. Without the struggles and sacrifices of African Americans, the United States would not have the constitutional amendments or multitude of laws that prohibit exclusion and further demand inclusion, hard-won rights that have benefited every other marginalized group in the U.S.”
…..
“We are angered and outraged. We are also inspired by your strength, defiance, and perseverance in the face of violent, oppressive systems that have terrorized you for 400 years.

Racist discrimination cannot function without the capitalist material infrastructure that underpins and abets it. We therefore recognise radical disruption as an effective and legitimate means of undermining this infrastructure. We support you however you choose to resist your oppression, for that is your natural right.

From Palestine and our diaspora, we echo your demands and know that our freedom is incomplete without yours. We will not stop fighting until both our peoples are free, and indeed until all peoples and other sentient beings are free!”

This rebellion is rooted in love.

To protest for Black life, to demand dignity, to cry out for justice, is love.

Today, rebellions out of love are happening throughout this nation, an empire built on the backs of Black people who were kidnapped from their homelands and subjected to violent repression for over 400 years. We stand in  full support of this Black uprising. We remain fully committed to Black liberation and defending Black life across the globe and within our own communities.

There is a long legacy of Black-Palestinian solidarity and a radical understanding that the Black liberation struggle is an anti-colonial fight that is transnational and connected to the struggles of oppressed peoples across the globe. As we recognize the connections between the Palestinian and Black struggles, we must also recognize that there are historical and contextual differences between our struggles.

Now is not the time for drawing parallels that flatten Black history, minimizing police brutality in the U.S. to a product of training in Israel, or redirecting attention away from Black trauma to Israeli state violence. It is our duty to center the demands and voices of Black communities in the US who have been resisting systematic oppression and white supremacy over four centuries.

Engaging in joint struggle and transnational solidarity is part of the legacy of Palestinian resistance.  We will continue that legacy today by uplifting Black liberation struggles and looking inward to make our homes and communities a stronger base for joint struggle. We can’t be afraid or defensive about engaging internally within our community about  anti-Black racism, state violence, and policing in the U.S.

We are asking you all to amplify the demands and call to action of Movement 4 Black Lives, a network of Black freedom fighters who are calling on city and state governments to Defund Police departments and redirect that money to emergency response programs that don’t kill Black people.  We are asking you to donate to Black-led organizations who are putting in the work to tackle racist systems at the root.

There are local Minneapolis organizations where George Floyd was murdered such as Black Visions Collective and Reclaim the Block. Other organizations who are doing crucial work within their communities are Dream Defenders, BYP-100, Assata’s Daughters, and Law For Black Lives. For Palestinian and Arab communities, there are great resources on how you can speak with your families about anti-Black racism, policing, and criminality. The Arab Resource Organizing Center (AROC) released an excellent resource  on “Alternatives to policing in Arab/Muslim communities”.  This Thursday, the American-Arab Anti-Discrimination Committee (ADC) is hosting a conversation featuring our good friends Ajamu Amiri Dillahunt, Noura Erakat, and Ahmad Abuznaid about Palestinian solidarity with Black communities.

The rebellion will continue until there is justice. Justice for George Floyd, Breonna Taylor, Tony McDade, Ahmaud Arbery, Sean Reed, Sandra Bland, and the millions of Black people who have been subjected to systemic racism and police violence in the U.S. for over 400 years.

Statement in Solidarity with the Anti-Racism Movement
in America
by the Greek Orthodox Patriarch of Jerusalem,
Archbishop Theodosios Atallah Hanna
EXCERPTS:

“Long live our brothers in humanity in your fight against hate and racism everywhere in this world.”

“From the City of Jerusalem, the City of Peace, we stand firm, in solidarity and support,
with the peaceful demonstrators who are fighting to end racism, prejudice, and police
brutality all over the United States and around the world.

From Palestine, the Homeland of Hope, we send each one of you a message of solidarity and support in your fight for justice and an end to racism and violence in all its forms and colors. We condemn and reject the heinous murder of George Floyd. We condemn the systemic and institutional anti-black racism in America. Racism is evil and must be rejected, confronted, and resisted by all peaceful means.

“As mothers, sisters, aunts, and grandmothers we are filled with a wide range of emotions provoked by the cold and heartless murder of Mr. George Floyd. When Mr. Floyd said that he could not breathe, our hearts ached with deep sorrow. We cried when he called for his mother. And we were filled with anger when no one responded to his pleas and came to his rescue. And we are also heartened by the ongoing battle for justice, equality, and peace waged across our nation.”
…..
“Ending racism is our collective responsibility, its weight has never been heavier or more costly in life and limb than today. Our African American sisters and brothers have raised their voices and called for equal justice for all Americans for far too long.  Today more than ever they need us to join them and loudly demand an end to the chronic injustice that has marred our nation since its inception. Equal Justice for all Americans is a non-negotiable right, and absolutely yes, Black Lives Matter!”
See the full statement 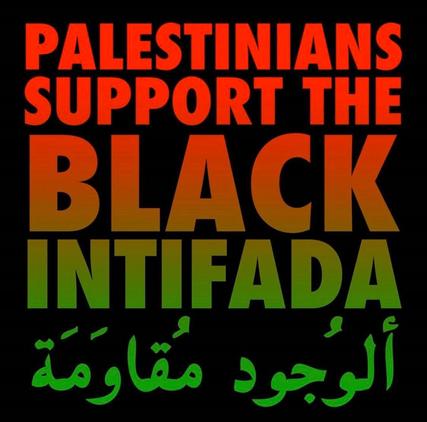 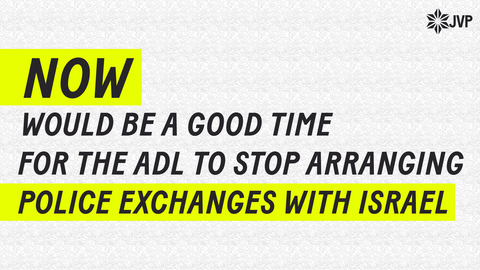 George Floyd's image painted on the Separation Wall (also known as the Apartheid Wall) that Israel built in the West Bank. The Wall was declared illegal by the International Court of Justice in 2004. 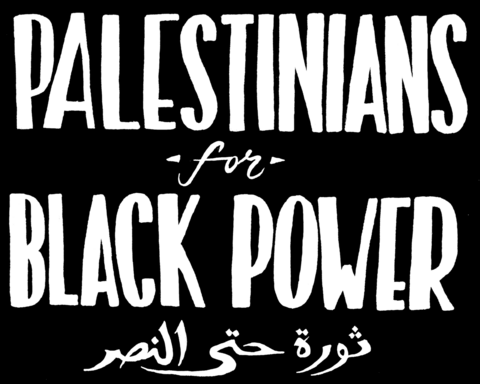