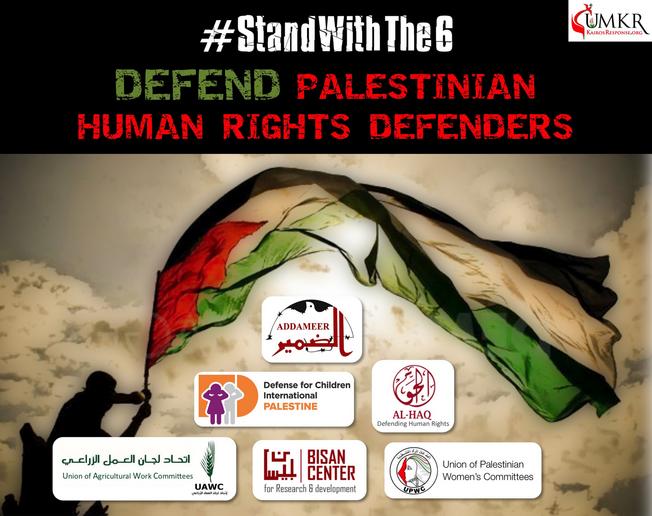 Addameer
Addameer Affirms its Commitment to Protect and Defend Palestinian Prisoners
Addameer categorically rejects all attempts at criminalizing and halting our necessary human rights work and defense of Palestinian prisoners through the baseless designation of six Palestinian organizations as “terrorist organizations.”
For over three decades, Addameer lawyers and researchers have worked relentlessly to document and produce reports detailing gross systematic practices of arbitrary detention, torture, and the absence of fair trial standards….
In retaliation, we have faced decades of an ongoing systematic harassment campaign by Israeli occupation authorities targeting Addameer through arbitrary arrests of staff, military raids on its offices in Ramallah, gag orders on prisoners’ cases, travel bans, residency revocation, and disinformation campaigns. These disinformation campaigns, spearheaded by Israeli occupation authorities and allied non-state actors, have greatly escalated in recent years….
Read more

Defense for Children International – Palestine
DCIP Statement on Israeli Authorities’ Designation of DCIP as a “Terrorist Organization”
As DCIP defends Palestinian children in the Israeli military courts and exposes grave violations against Palestinian children at the hands of Israeli forces, delegitimization and disinformation campaigns against DCIP have been advanced by a network of rising nationalist Israeli civil society organizations and associated organizations outside of Israel, with the support of the Israeli Ministry of Foreign Affairs. These efforts take the form of targeted and organized defamation campaigns based on a range of allegations related to the violation of counter-terrorism legislation and international law. These allegations are erroneous, misrepresent, and distort critical factual or legal elements.
See and download the statement

Former staff of Al-Haq
Statement from former Al-Haq workers outside Palestine in response to the designation of six Palestinian human rights and civil society groups as “terrorist”
Across the region, and indeed internationally, Al-Haq is credited as an incubator for human rights activists and professionals, and for setting the gold standard in research and advocacy.
Read more

25 Human Rights and Civil Society Organizations based in Israel
Shutting down HR organizations a draconian measure; We stand in solidarity with our Palestinian colleagues
The Minister of Defense's designation of prominent Palestinian civil society organizations, among them our colleagues in the Palestinian human rights community, as terrorist organizations, is a draconian measure that criminalizes critical human rights work. Documentation, advocacy, and legal aid are fundamental activities for the protection of human rights worldwide. Criminalizing such work is an act of cowardice, characteristic of repressive authoritarian regimes. Civil society and human rights defenders must be
protected. We stand in solidarity with our Palestinian colleagues, and call on members of the Israeli government and the international community to oppose this decision unequivocally.
See the signers

U.S. Organizations and Leaders
United Methodists for Kairos Response (UMKR) and United Methodists’ Holy Land Task Force are signers on this letter
304 Organizations Demand Biden Administration Condemn Israel’s Crackdown on Human Rights Groups
As groups committed to social justice, civil rights, and universal human rights, we have seen first hand the ways that the charge of “terrorist” and the so-called “war on terror” threatens not only international human rights defenders, but also social movements and marginalized communities here in the U.S.: Indigenous, Black, brown, Muslim, and Arab activists and communities have similarly faced silencing, intimidation, criminalization and surveillance under such baseless charges. A threat against the Palestinian human rights movement is a threat against movements for social justice everywhere, and in order to protect human rights and human rights defenders, all states must be held accountable for taking such manifestly unjust actions. While our government has long offered unconditional support to the Israeli government,4 our movements and organizations will always stand first and foremost with the rights and safety of people.
See the full letter on our website

US Churches and Organizations

is a signer on this letter
Letter to Secretary Blinken from Churches & Organizations in the US, Opposing Designation of Palestinian HR Groups as terrorist organizations
The United Methodist General Board of Church and Society is a signer of this letter
The targeted organizations are among the most respected Palestinian human rights organizations, organizations that many of us rely on for information and with which we have long established relationships. All of these organizations work closely with the United Nations, international NGO partners, and activist communities and advocate to European and U.S. government officials. They also provide vital information about and services to Palestinians whose human rights have been violated.
See the full letter on our website

Presbyterian Church USA
Stated Clerk speaks out on actions against six Palestinian organizations
Indeed, this is a crisis of impunity and accountability that has been allowed to continue for far too long. The failure of the international community to hold Israel accountable for its grave human rights abuses and ongoing violations of international law has led to actions against the Palestinian people that are increasingly violent and brazen.
Read more

American Muslims for Palestine (AMP)
AMP condemns Israeli "terror" designation of Palestinian human rights groups
"The Israeli government continues to attack Palestinian human rights and civil society groups who are exposing Israel’s apartheid regime to the rest of the world and particularly groups who are making an impact at the United Nations and US Congress,” said Ayah Ziyadeh, Advocacy Director of American Muslims for Palestine (AMP). “The Biden Administration and Congress can no longer enable the injustices committed by the state of Israel and must openly and firmly condemn this designation by the Israeli government.”
Read more

B’Tselem, The Israeli Human Rights Center
Proud to stand in solidarity with our Palestinian colleagues
This morning, B’Tselem and more than 20 Israeli civil society organizations ran a front-page ad in the Haaretz daily stating the obvious: criminalizing human rights organizations is a cowardly act that is characteristic of oppressive authoritarian regimes.
The Israeli apartheid regime has sweeping powers when it comes to running the lives of its Palestinian subjects. It does not hesitate to use these powers to prevent Palestinians from exposing its actions, from demanding accountability and from lobbying the international community. The regime is now using these powers to try and shut down human rights organizations – yet again citing “classified evidence.” The minister of defense may have signed the order this time, but the responsibility, and the disgrace, lie with the entire government – with every single minister and with all the parties to the coalition.
Read more

Amnesty International and Human Rights Watch
Joint Statement
Israel/OPT: Designation of Palestinian civil society groups as terrorists a brazen attack on human rights
“This appalling and unjust decision is an attack by the Israeli government on the international human rights movement. For decades, Israeli authorities have systematically sought to muzzle human rights monitoring and punish those who criticize its repressive rule over Palestinians. While staff members of our organizations have faced deportation and travel bans, Palestinian human rights defenders have always borne the brunt of the repression. This decision is an alarming escalation that threatens to shut down the work of Palestine’s most prominent civil society organizations.
Read more - see the full statement at either website
https://www.amnesty.org/en/latest/news/2021/10/israel-opt-designation-of-palestinian-civil-society-groups-as-terrorists-a-brazen-attack-on-human-rights/
or
https://www.hrw.org/news/2021/10/22/israel/palestine-designation-palestinian-rights-groups-terrorists#

United Nations High Commissioner for Human Rights, Michelle Bachelet
Israel’s “terrorism” designation an unjustified attack on Palestinian civil society
"Claiming rights before a UN or other international body is not an act of terrorism, advocating for the rights of women in the occupied Palestinian territory is not terrorism, and providing legal aid to detained Palestinians is not terrorism," Bachelet said.
"Israel must ensure that human rights defenders are not detained, charged and convicted in relation to their legitimate work to protect and promote human rights. I call on the Israeli authorities to revoke their designations against Palestinian human rights and humanitarian organisations as terrorist organizations, as well as their declarations against those they deem to be 'unlawful',"
Read more

Christian Peacemakers Teams
Statement on designation of six Palestinian organizations as "terrorist groups”s
This move to criminalize organizational reporting and public denouncement of human rights abuses by labelling the organizations "terrorists" is an affront to human rights work worldwide. The scope of this action and the precedent it sets without receiving diplomatic pushback causes deep concern throughout the global human rights community.
CPT joins in this global concern and calls on world governments to immediately remove the umbrella of impunity under which the Israeli occupation has flourished. CPT stands in solidarity with Palestinian human rights organizations and those demanding an immediate end to the Israeli occupation of Palestine.
Read more

Adalah, The Legal Center for Arab Minority Rights in Israel
These groups are among the most prominent human rights organizations in Palestine that daily challenge and expose severe violations of human rights before the international community. Their designation as terrorist organizations fits totalitarian and colonial regimes and constitutes political persecution under the pretext of anti-terrorism legislation as it puts thousands of Palestinians in direct and immediate danger.
Adalah is determined to resist these decisions by all legal means available.
See the full statement in a Tweet series

International Trade Union Confederation (ITUC) and Global Union Federations
Israel’s designation of Palestinian human rights groups as terrorists is outrageous
“It is no coincidence that this announcement coincides with Israel’s decision to build more than 4,000 new houses in illegal Israeli settlements inside Palestine, a move that has been sharply criticised by even Israel’s closest allies.
“The Israeli government seems intent on wrecking any prospect of a two-state solution, with Palestine and Israel co-existing as sovereign states. The existence of the settlements is a flagrant violation of international law, and instead of being expanded they should be dismantled.”
Read more

16 UK-based organizations
Israeli Government’s attacks on six Palestinian civil society groups must be resisted
The UK Government has committed to supporting human rights defenders around the world, and has called for the government of Israel to “fully respect the fundamental rights and freedoms of human rights defenders and organisations and to allow them to freely operate in Israel and Occupied Palestinian Territories.” Alongside other governments, it must now take urgent practical steps to reiterate its public support to Palestinian human rights defenders and humanitarian and development organisations.
Signed by: ABCD Bethlehem, Amos Trust, Amnesty International UK, CAABU (Council for Arab-British Understanding), Catholic Agency for Overseas Development (CAFOD), Christian Aid, Embrace the Middle East, Friends of Nablus and Surrounding Areas (FONSA), Interpal, Lawyers for Palestinian Human Rights (LPHR), Medical Aid for Palestinians (MAP), Oxfam GB, Quakers in Britain, Sabeel-Kairos UK, Save the Children UK, War on Want
Read more