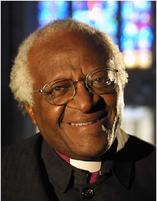 subjugation of Palestinians
By Desmond Tutu, special to the Times
May 1, 2012
Tampa Bay Times

A quarter-century ago I barnstormed around the United States encouraging Americans, particularly students, to press for divestment from South Africa. Today, regrettably, the time has come for similar action to force an end to Israel's long-standing occupation of Palestinian territory and refusal to extend equal rights to Palestinian citizens who suffer from some 35 discriminatory laws.

I have reached this conclusion slowly and painfully. I am aware that many of our Jewish brothers and sisters who were so instrumental in the fight against South African apartheid are not yet ready to reckon with the apartheid nature of Israel and its current government. And I am enormously concerned that raising this issue will cause heartache to some in the Jewish community with whom I have worked closely and successfully for decades. But I cannot ignore the Palestinian suffering I have witnessed, nor the voices of those courageous Jews troubled by Israel's discriminatory course.

Within the past few days, some 1,200 American rabbis signed a letter — timed to coincide with
resolutions considered by the United Methodist Church and the Presbyterian Church (USA) —
urging Christians not "to selectively divest from certain companies whose products are used by
Israel." They argue that a "one-sided approach" on divestment resolutions, even the selective
divestment from companies profiting from the occupation proposed by the Methodists and
Presbyterians, "damages the relationship between Jews and Christians that has been nurtured for
decades."

While they are no doubt well-meaning, I believe that the rabbis and other opponents of divestment
are sadly misguided. My voice will always be raised in support of Christian-Jewish ties and against
the anti-Semitism that all sensible people fear and detest. But this cannot be an excuse for doing
nothing and for standing aside as successive Israeli governments colonize the West Bank and
advance racist laws.

I recall well the words of the Rev. Martin Luther King Jr. in his Letter from a Birmingham Jail in which
he confesses to his "Christian and Jewish brothers" that he has been "gravely disappointed with the
white moderate … who is more devoted to 'order' than to justice; who prefers a negative peace
which is the absence of tension to a positive peace which is the presence of justice; who constantly
says: 'I agree with you in the goal you seek, but I cannot agree with your methods of direct action;'
who paternalistically believes he can set the timetable for another man's freedom. ..."

King's words describe almost precisely the shortcomings of the 1,200 rabbis who are not joining the
brave Palestinians, Jews and internationals in isolated West Bank communities to protest
nonviolently against Israel's theft of Palestinian land to build illegal, Jewish-only settlements and the
separation wall. We cannot afford to stick our heads in the sand as relentless settlement activity
forecloses on the possibility of the two-state solution.

If we do not achieve two states in the near future, then the day will certainly arrive when Palestinians
move away from seeking a separate state of their own and insist on the right to vote for the
government that controls their lives, the Israeli government, in a single, democratic state. Israel finds
this option unacceptable and yet is seemingly doing everything in its power to see that it happens.
Many black South Africans have traveled to the occupied West Bank and have been appalled by
Israeli roads built for Jewish settlers that West Bank Palestinians are denied access to, and by Jewish-only colonies built on Palestinian land in violation of international law.

Black South Africans and others around the world have seen the 2010 Human Rights Watch report
which "describes the two-tier system of laws, rules, and services that Israel operates for the two
populations in areas in the West Bank under its exclusive control, which provide preferential
services, development, and benefits for Jewish settlers while imposing harsh conditions on
Palestinians." This, in my book, is apartheid. It is untenable. And we are in desperate need of more
rabbis joining the brave rabbis of Jewish Voice for Peace in speaking forthrightly about the
corrupting decadeslong Israeli domination over Palestinians.

These are among the hardest words I have ever written. But they are vitally important. Not only is
Israel harming Palestinians, but it is harming itself. The 1,200 rabbis may not like what I have to say,
but it is long past time for them to remove the blinders from their eyes and grapple with the reality
that Israel becoming an apartheid state or like South Africa in its denial of equal rights is not a future
danger, as three former Israeli prime ministers — Ehud Barak, Ehud Olmert and David Ben Gurion
— have warned, but a present-day reality. This harsh reality endured by millions of Palestinians
requires people and organizations of conscience to divest from those companies — in this
instance, from Caterpillar, Motorola Solutions and Hewlett Packard — profiting from the occupation
and subjugation of Palestinians.

Such action made an enormous difference in apartheid South Africa. It can make an enormous
difference in creating a future of justice and equality for Palestinians and Jews in the Holy Land.

This article appeared in the Tampa Bay Times during the United Methodist General Conference 2012
held in Tampa, Florida