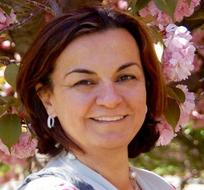 RESOURCES SHARED DURING OR RELATED TO THE WEBINAR

UCC PIN resources on the 2021 UCC resolution
“Declaration for a Just Peace between Palestine and Israel:
https://www.uccpin.org/resolution-resources
UCC PIN curriculum and film: “How Are the Children?”
https://hatcnow.org/

A resource from Jonathan Kuttab on the history of the conflict.
https://christatthecheckpoint.bethbc.edu/history-of-the-palestinian-israeli-conflict/

Regarding work in The Christian Church (Disciples of Christ):
In lieu of the COVID-canceled Disciples General Assembly, Disciples leaders issued the following statement which speaks both for the church and to the church: “Compelled to Witness”
https://www.globalministries.org/compelled-to-witness/
Working now on distributing the statement and encouraging actions called for in the Christian Palestinian’s 2020 declaration: “Cry for Hope: A Call to Decisive Action”
See Cry for Hope online and endorse it:
https://www.cryforhope.org/
Download Cry for Hope
https://www.cryforhope.org/media/attachments/2020/06/30/cry-for-hope-english.pdf

Responses to a request for a book on the Christian history of Palestine:
Blood Brothers, by Elias Chacour
Dying in the Land of Promise, by Don Wagner
The Forgotten Faithful: A Window Into The Life And Witness Of Christians In The Holy Land, 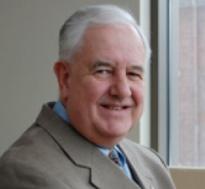 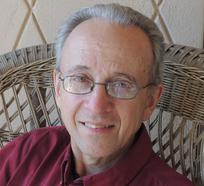 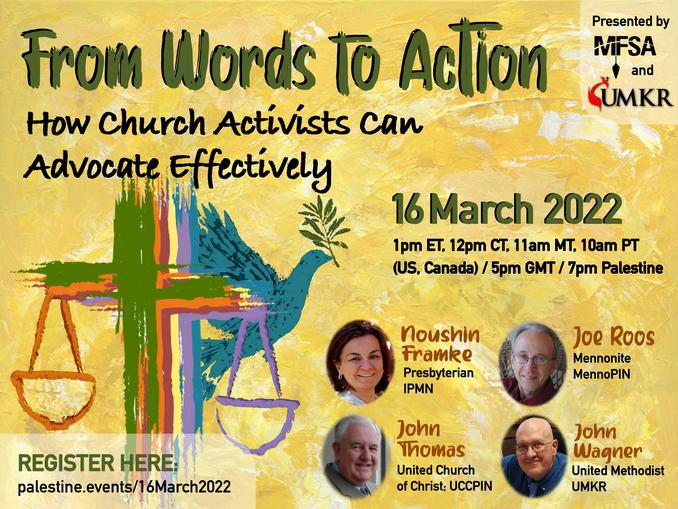 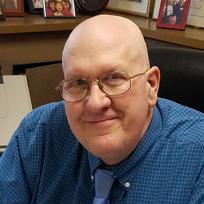 Scroll down to see the video of this webinar

From Words to Action: How Church Activists Can Advocate Effectively

UMKR and MFSA present a timely and practical webinar on the challenges and opportunities in organizing church activism.

How are denominational activists organizing their constituencies today for a just peace in the Holy Land? How do grassroots movements inform individuals, congregations, regional bodies and denominations and motivate them to take a stand, adopt resolutions, lobby politicians, find local partners, work in coalitions, recruit activists, and engage in boycotts and divestment actions?

Our panel of experienced organizers and justice activists come from a diverse ecumenical background and their discussion will compare and contrast different approaches to organizing advocacy in churches.

Noushin Framke is an Armenian/Iranian-American who

Ruling Elder in the Presbyterian Church (USA) and a

longtime organizer and leader in her church for racial

justice and Palestinian rights. She served for many years

on the Steering Committee of IPMN, the Israel/Palestine

Mission Network of the PCUSA.

Joe Roos is a co-founder of and former publisher at

publication committed to the integration of spiritual renewal

and social justice. He is an ordained pastor in the Mennonite

Church USA and has served churches in Washington,

of FOSNA, Friends of Sabeel North America, and on the

John Thomas is the former General Minister and President

of the United Church of Christ (UCC). John served in the

UCC’s Collegium of Officers, overseeing the

As the General Minister and President, he was the

spokesperson for the denomination, representing the

UCC in ecumenical and interfaith circles. Today John is

a member of the Steering Committee of UCCPIN, the UCC Palestine Israel Network.

John Wagner is a decades-long justice activist and

organizer, with a particular focus on Palestinian rights, in the

interfaith circles. He is an ordained elder of the UMC and

has served as pastor for several churches in the West Ohio

conference. John was one of the founders and for many

years the Co-chair of UMKR, United Methodists for

Watch the video of the webinar below.

Under the video, see links and resources shared during the webinar.