Want to get started on the HP Boycott now? Find ideas and materials you can use yourself and in your congregation, conference, or organization - click here​ 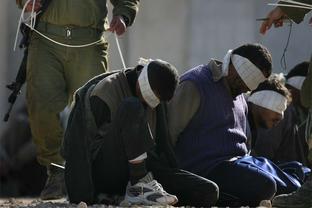 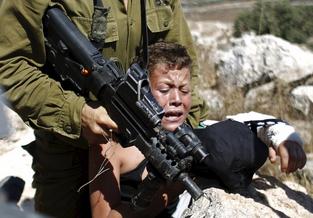 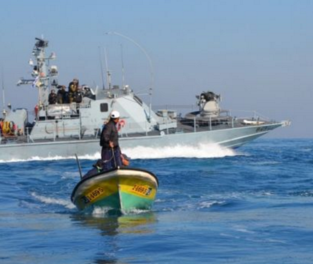 ​ABOVE: A SHORT VIDEO THAT INTRODUCES THE HP BOYCOTT

See detailed information about HP from the Israeli organization, Who Profits: https://whoprofits.org/HP
Download the Who Profits report on HP (PDF, 28 pp)

Check out AFSC's investment screening tool, "Investigate." Since HP has split into two companies, see both of these pages:

Read the AFSC article: You just have to be human: resisting apartheid and occupation

Source of information below: https://bdsmovement.net/boycott-hp#why

HP provides and operates much of the technology infrastructure that Israel uses to maintain its system of apartheid and settler colonialism over the Palestinian people. Hewlett Packard Enterprise is the prime contractor of the Basel system, an automated biometric access control system employed within Israel’s checkpoints and apartheid wall. The ID cards distributed as part of this system form the basis of Israel’s systematic discrimination against Palestinians. HP technology helps the Israeli navy enforce the siege on Gaza.

Woman with a dying baby in her arms is forced to leave an ambulance from the West Bank and step into one from Jerusalem to reach the hospital in East Jerusalem. [Photo: Tamar Fleishman/ MachsomWatch.org]

These checkpoints fragment and segregate the Occupied Palestinian Territories and its residents through electric fences, watchtowers, sensors, and concrete barriers. The checkpoint system separates Palestinian workers from their jobs, farmers from their land, students from their schools, patients from hospitals, and families from each other.

HP provides the technology infrastructure for Israel’s ID card system. This ID system forms the part of the Israeli apartheid regime’s tiered system of citizenship that gives different rights to different people and leads to institutionalised discrimination in housing, employment, marriage, healthcare, education, and policing.
HP also directly contracts with the Israeli municipalities of Modi’in Ilit and Ariel, two of the largest Jewish-only Israeli settlements in the West Bank, providing them with a range of services.

HP provides broad IT infrastructure and support services for Israeli occupation forces, particularly the Israeli Navy that maintains the siege on Gaza.
Israel’s frequent massacres of Palestinians in Gaza and its siege are deliberately implemented to deny Palestinians their basic rights to life, freedom and self-determination, and to physically segregate them.
Israel’s siege severely limits what goods can go in and out. This denial of supply of essential goods was once described by a senior Israeli official in the following terms: “the idea is put the Palestinians on a diet, but not to make them die of hunger.”

HP also provides services and equipment to the Israeli Prison Service (IPS), including providing and maintaining its central server system.
Israel’s prison system is used to suppress Palestinian political activity, and to stifle opposition to its policies. By helping Israel run its prisons, HP is at the heart of Israel’s use of mass incarceration to undermine Palestinian opposition to apartheid.
According to Human Rights Watch, “the extraction of confessions under duress, and the acceptance into evidence of such confessions…form the backbone of Israel’s military justice system”.

Each year, 500-700 Palestinian children are arrested, detained and prosecuted by Israel. The ill-treatment of children imprisoned by Israel is “widespread, systematic and institutionalized” according to UNICEF. 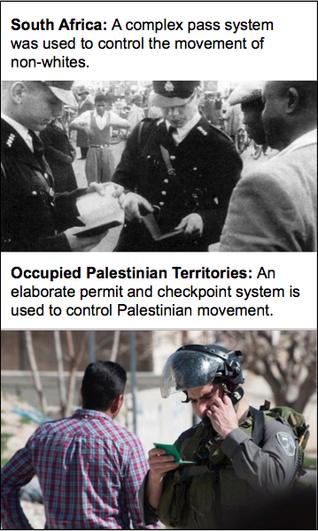 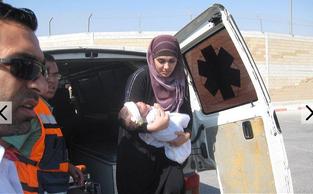 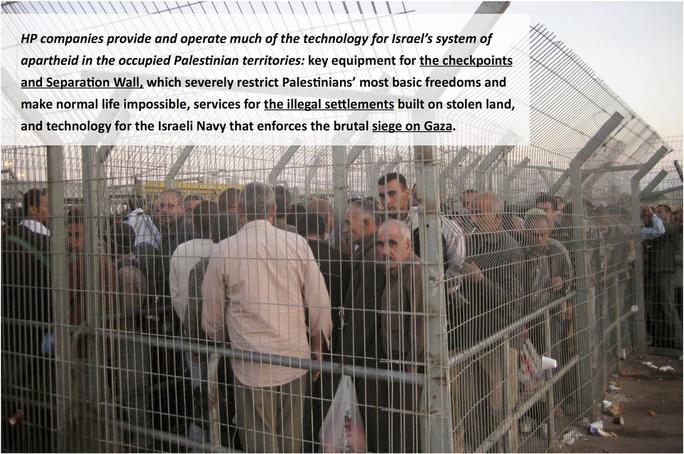