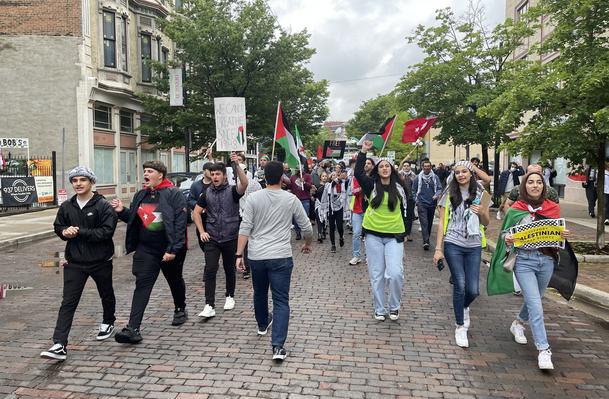 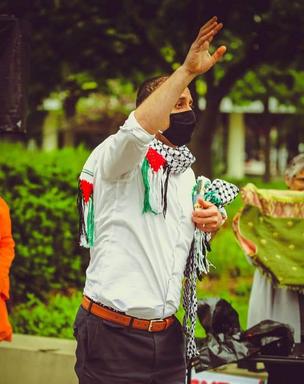 United Methodists in the Streets for Palestinian Rights

May 2021 – This has been a tumultuous year in the movement for Palestinian rights, particularly in May.  We saw  Israel's escalation of their ethnic cleansing plans for Jerusalem with raids on homes in east Jerusalem, followed by multiple assaults by Israeli forces on worshipers at Al-Aqsa Mosque in Jerusalem (Islam's third holiest site in the world). Hamas warned that if these violent attacks in Jerusalem did not stop they would take action and, after their deadline had passed, fulfilled that promise with rocket fire from Gaza. By the time a ceasefire was called, 12 in Israel had been killed. During that same time Israel retaliated with the terrifyingly disproportionate bombardment of two million captive residents in Gaza, killing over 230, including more than 60 children.

For the first time, many news outlets in the US

presented a vivid picture of what was happening

to Palestinians in Gaza, as well as the West Bank

and inside Israel, and let Palestinian voices be

heard in print, on television, and online.

Younger activists, including many Palestinian youth,

organized as never before and protests and rallies
for the Palestinian people broke records in cities
around the world.

of how the world stood with Palestine this month!

United Methodists joined thousands in the streets
making their voices heard for Palestinian rights.
See some of them below.

MAY 2021
NEW  From Michael Yoshi in California
Rev. Michael Yoshi is a former co-chair of UMKR and an active organizer in diverse justice circles, including the Western Methodist Justice Movement (WMJM). This month he spoke at a large San Francisco rally (organizers estimate nine thousand) about anti-Asian violence and solidarity between Asians and Palestinians, about UMKR's boycott and divestment work, and about the latest land confiscations in the West Bank Village of Wadi Foquin. Michael is an organizer with Friends of Wadi Foquin, a United Methodist organization in the California-Nevada Conference that supports and advocates for the survival of this endangered village.

From Sara Webb Philips in Georgia
UMKR Steering Committee member Rev. Sara Webb Philips was the first person to send us photos for May 2021 action (and she gets a gold star 🌟). See her below with young human rights supporters at a big Atlanta action on May 15th.

From Connie Hammond in Ohio
Connie Hammond attended a rally in Columbus, Ohio on May 18: “There were hundreds of people and the march took High St. in downtown Columbus for 2 blocks.”

This photo above is from another Columbus event, held on May 14th, and shows a group from Connie's Jewish Voice for Peace chapter - Central Ohio. Connie does a lot of organizing in that chapter and with others in her area. She describes the May 14th event as “noisy, but peaceful, respectful and well-organized.”
NEW Below: some additional snaps from Connie show the size of the action.

From Christine Anders in Iowa
Christine Anders has served on the UMKR Steering Committee and organizes locally in Des Moines with the Middle East Peace Education Coalition (MEPEC). Here are members from her local group at a May 2021 protest.
In the photo on the right is Mohamed Ali, another member of the MEPEC, a Palestinian born and raised in Lebanon after his grandparents were expelled from Palestine.

From John Wagner in Ohio
Rev. John Wagner, our UMKR co-chair, helped to organize this march in Dayton, but did not get a picture of himself there! However he sent us some good photos of the action.

John’s description of the May 17 event:
There was a rally and march in Dayton, Ohio on Monday, May 17th. I was one of the organizers, but more on the margins. It was very successful, and brought out many young people, mostly Arab, many Palestinians, families, children, students. Two things stood out for me: one, these were not your grizzled and gray activists from protests of yore. These were young people who were taking charge, taking responsibility, confident that their race and religion were not only acceptable, but gave them authority. They also demonstrated the good manners that are part of their Arab traditions. An older African American pastor spoke quite powerfully, and was given enthusiastic applause. I also saw a group of young men ask to have their pictures taken with a tattooed white police officer, who seemed more than willing to be seen with them. There was hope in the air that this rally reflected a real shift in public perception of Palestinians, as well as a sign that young people are becoming truly engaged.

From Gloria Fearn in California
Gloria reports on a Sacramento event on May 18: “There was a sizable protest at the intersection of 5th and I in Sacramento on Friday. The group then walked to the Capitol. It was a beautiful, sunny day with lots of flags and friendly traffic. Patricia Daugherty and I represented the Israel/Palestine Task Force of the California/Nevada Conference UMC. We enjoyed seeing many friends from Stockton, Jewish Voice for Peace and the Sacramento Regional Coalition for Palestinian Rights. We hadn’t seen each other in person for so long that the event took on an almost festive tone despite the tragedy we were protesting.

From Paula Roderick in Illinois
Paula is a UMKR Steering Committee member – along with organizing in half a dozen other groups – and she brought UMKR signage (thank you Paula!❤️) to one of her events in Chicago on May 16. She estimates about 8,000 people turned up. Paula is on the left and on the right is Palestinian American Rosanna Thompson.
Paula also spoke at a Chicago rally this month and we are looking for that video - to be posted here when we get it. 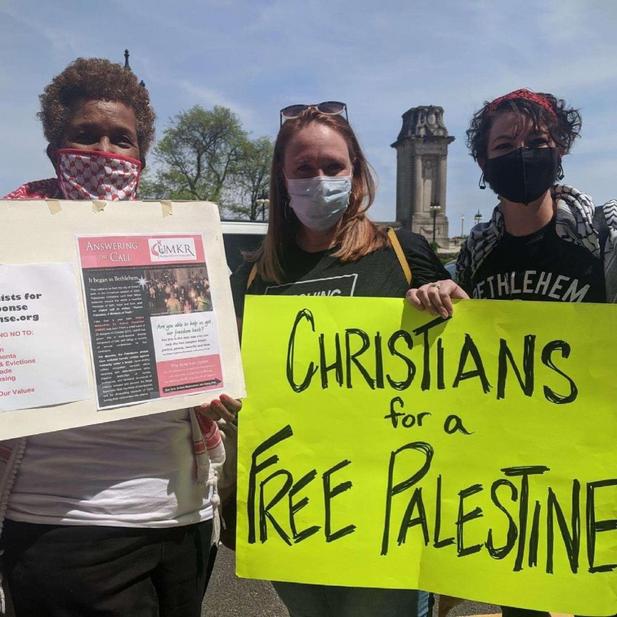 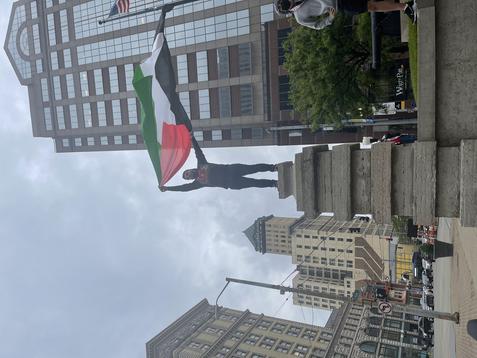 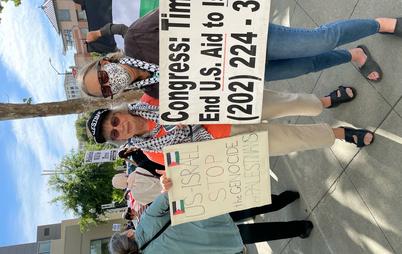 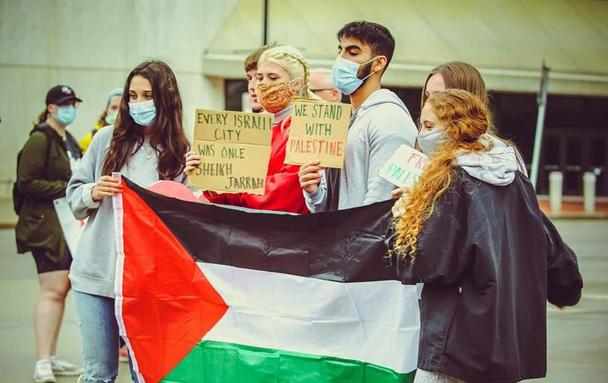 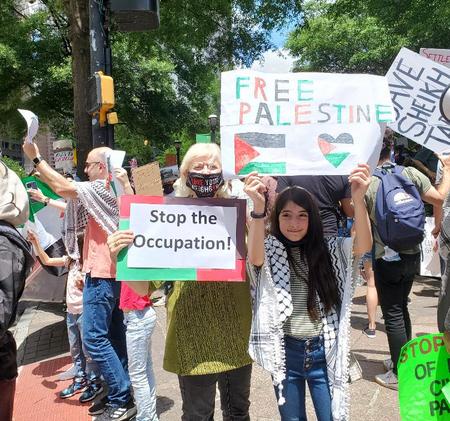 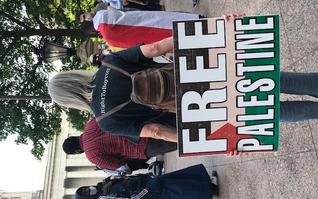 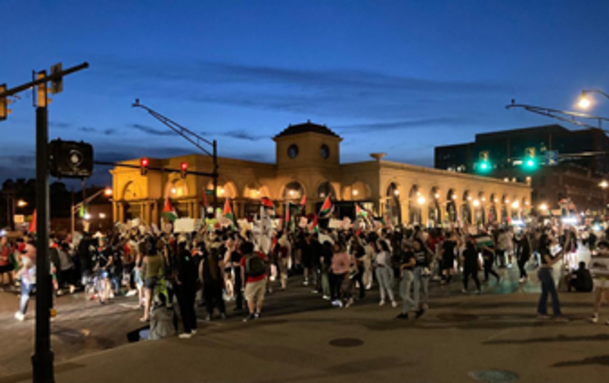 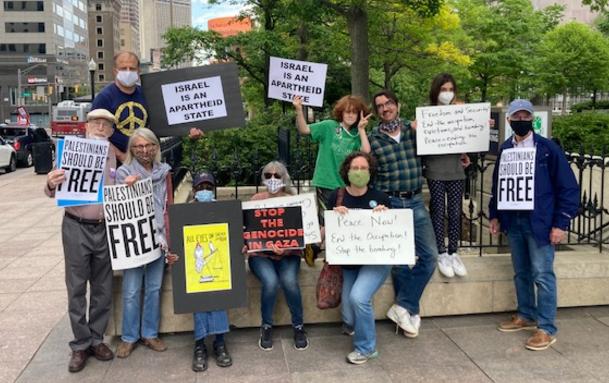 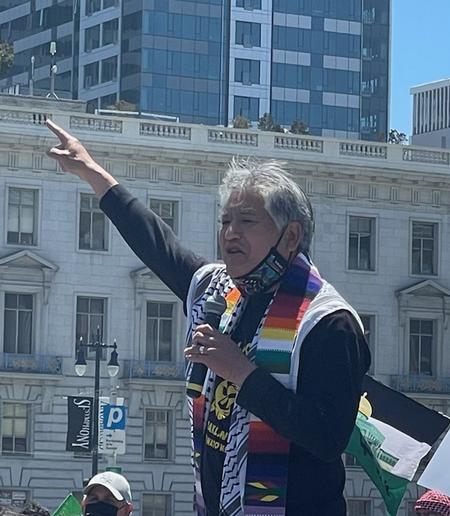 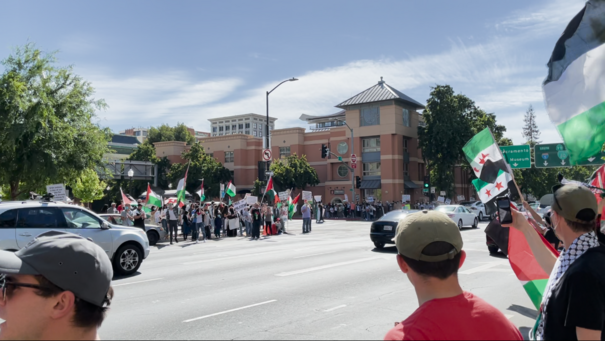 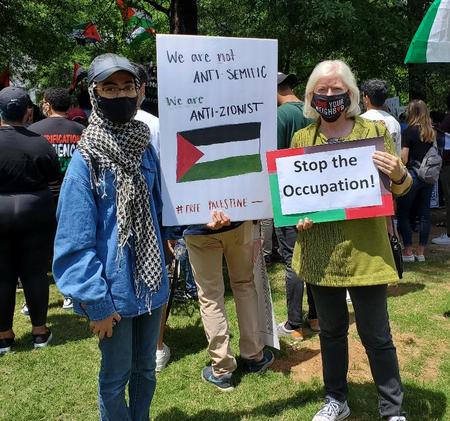