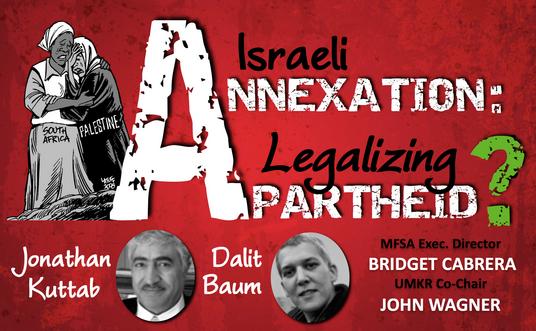 Learn more about this MFSA-UMKR webinar on June 10th and register to attend, on our website

from American Muslims for Palestine (AMP)

5 June 2020 – This week marks 53 years since the war of 1967 also commonly known by Palestinians as the Naksa when nearly 200,000 Palestinians were displaced from their homeland. As Netanyahu and the Israeli government plans to annex the West Bank, we call on Americans to take a stand and call for sanctions on Israel.

UMKR NOTE: To contact your members of Congress and urge them to oppose Israeli annexation, click here

Institute for Middle East Understanding (IMEU)
Fact Sheet: Meet the New Israeli Government (May 2020)
According to the terms of the coalition agreement between Likud party leader Benjamin Netanyahu and Israel Resilience Party leader Benny Gantz, Netanyahu will serve as prime minister for 18 months with Gantz as deputy prime minister and defense minister, after which they will rotate and Gantz will become prime minister
for the remainder of the government’s term. At that point, some of the other ministers will change as well. With 36 ministers and 16 deputy ministers, it is the largest government in Israel’s history.

The agreement also stipulates that the new government can begin annexing occupied Palestinian land in the West Bank as soon as July 2020, which would be a grave violation of international law, which bars the acquisition of territory by force. Both Netanyahu and Gantz have endorsed President Donald Trump’s diplomatic plan for Palestine/Israel, widely seen as a gift to Israel’s right and a final death blow to the two-state solution, which includes approval for Israeli annexation of the large parts of the West Bank. Israeli and Trump administration officials have already held meetings to coordinate what Palestinian land Israel will annex.
See it here

We are writing to you as faith leaders who are deeply concerned by the announcement of Prime Minister Netanyahu of Israel that annexation of West Bank land could begin as early as July of this year.  President Trump has endorsed annexation in his “Peace to Prosperity Proposal.” As recently as April, Secretary Pompeo has also greenlighted this announcement with his statement that annexation is an Israeli decision.

We are committed, as individuals, and as leaders of faith communions and organizations, to the achievement of a just peace in Israel/Palestine that respects and defends the human rights of all who live in that land we call Holy. Unilateral annexation of occupied Palestinian land by the State of Israel is not in the cause of a just peace; annexing thirty percent or more of the West Bank would entrench inequalities and abuses of Palestinians’ human rights for the foreseeable future.

We share the grave concern expressed by the Council of Patriarchs and Heads of the Holy Land Churches who in a statement dated May 7, called upon Israel to refrain from annexation, making clear that such a unilateral move “would bring about the loss of any remaining hope for the success of the peace process.” Formal annexation is an act of aggression, not a step for peace.

As of this writing, there is no evidence that President Trump and his administration will reverse course and reject annexation. Warning about the Administration’s current trajectory, Rev. Munther Isaac and Father Jamal Khader, Christian leaders in the West Bank, wrote in Haaretz in early May, “Let us be clear: implementing the Trump plan would bring catastrophic consequences for the prospects of a political solution between Israelis and Palestinians, and particularly for the fulfillment of the rights of the Palestinian people, including Palestinian Christians.”

We call on Congress to wield its power of the purse and not allow any United States funds provided to Israel to be used for the recognition, facilitation or support of annexation, or for denial of Palestinian rights and violation of international law, including continuing occupation. Respect for human rights, compliance with international law, and achievement of peace with justice is essential not only for the security and wellbeing of Palestinians, but for that of Israelis as well. Should Congress fail to oppose and create tangible consequences for annexation by the Israeli government, the United States will bear significant responsibility for the continued deprivation of Palestinian rights and for the continuation of the conflict.

The United States has a moral responsibility to promote human rights, justice and peace, both at home and abroad. We are now looking to our Congressional leaders to assure that our country acts courageously and makes clear that annexation undermines the rule of law and is morally unacceptable.

The Most Rev. Michael B. Curry

Office of Peacebuilding and Policy, Church of the Brethren

Christian Church (Disciples of Christ) in the United States and Canada

Co-Founder and Board Member

Co-Executive, Global Ministries of the Christian Church (Disciples of Christ) and United Church of Christ

27 Religious Leaders Oppose Israeli Annexation of Palestinian land
Letter to the U.S. Congress includes the President of the UMC's Council of Bishops

ON THE RIGHT SIDE OF THIS PAGE:
See sources for more information on this issue   ▶︎

UMKR really needs your support for our work to continue.