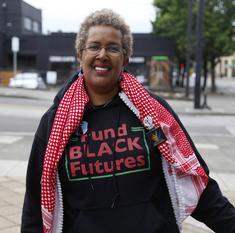 Am I “all in”?
A United Methodist reflects on JVP’s National Members

Sometimes it’s easier to start at the end in trying

to explain why an event had so much power.

“Sell the Torah, put the child in school.” That was the

moral of Rabbi Wise’s story, told in the closing plenary

I did not envision - and I doubt that the JVP organizers even envisioned - such a ferocious, sad, powerful, joyous, moving closing plenary. Rabbi Alissa Wise (Deputy Director of JVP) began that plenary – titled “All In!” – with the story of a rabbi and a young child who had been denied the chance to go to school because his family lacked funds.  The rabbi ultimately told his congregation to “sell the Torah and send the kid to school.”  That is what it means to be “all in.”  Although this theme was woven throughout the weekend, it was this closing plenary that summed up and exemplified what it means to say Yes! I am “all in.”  Yes, I will not leave Palestine out of the conversation on progressive activism!

At that closing event, three panelists carefully wove into one final tapestry the personal and political and social justice messages that so many activists brought to this amazingly diverse group gathered for three days at a Hyatt Regency hotel in Chicago:

Nyle Fort (a minister and activist from Newark, NH), weaving a Christian faith tradition of call and response, urged folks to allow our faith traditions to inform our activism.

Rasmea Odeh (long time activist, leader in the Palestinian American community here in Chicago, founder of the Arab Women’s Committee), in tears and moving us all to tears) as she described her experience of the Palestinians’ on-going Nakba – from being expelled from her family’s home in 1948, to the arrest, trial, and conviction in Israel that would lead to her deportation this year from her home here in Chicago – called us to remember that this battle is to stand with the dispossessed.

Linda Sarsour (Executive Director of Arab American Association of NY and co-founder of MPower Change), a fiery and unapologetic Palestinian American activist, reminded us that, in this fight, still it is Palestinians who have endured the worst, the most battle scars, as she described the mountains of hate mail and death threat that she and Rasmea have received because of their commitment to speak up for Palestine.

Then Rabbi Allisa Wise wrapped up the final plenary of this seminal weekend by urging all of us to our feet, to join in one final song before we stepped away and back into our work – “all in” for justice.

I am a JVP ally, an African American, a member of United Methodists for Kairos Response (UMKR), and also an organizer in the No Way To Treat A Child Campaign of DCI-Palestine and AFSC. I signed up for this weekend to volunteer at an information table for UMKR, to spend an hour or so at the No Way to Treat a Child table, and to be an observer.  After all, I thought, this was JVP’s National Members Meeting, and I was going just as an ally.  I did not know, until the last notes faded away after Sunday’s plenary session, I was there for myself, there to get schooled, to learn more deeply and better, how to be “all in.”

So this is what I took away from this NMM:

Welcome and recognize your allies.   It was important that UMKR be present at this meeting to stand with JVP along with other activist groups, religious and secular. Allies from Friends of Sabeel North America (FOSNA), Unitarian Universalists for Justice in the Middle East (UUJME), Institute for Middle East Understanding (IMEU), Interfaith Peace-Builders (IFPB), and many others were present, in the exhibit hall, in the workshops, and catching up with each other over coffee and cookie breaks in between the many meetings.  Throughout the meetings, workshops, plenaries, and lunches, JVP members told us: we show up for each other and respectfully work through our differences, with a clear understanding that we are together working for justice. This battle cannot be won alone, nor can we talk about a progressive activist agenda that leaves Palestine off the table.

Religious traditions are wonderfully important. JVP members danced, sang, and prayed in small and large ways throughout this weekend.  They joyfully beckoned us to take part in the Friday night Sing, to learn some of the wonderful protests songs that came out of the JVP-Boston song book, to join in Seders – they welcomed us in.  But traditions cannot stop at the end of the Sabbath or holy days, and cannot be barriers to holding each of us sacred and important, regardless of our religion or having no religion.

Create safe spaces. Throughout the weekend, JVP showed us how to do this.  Safe space means all are welcome and celebrated.  Not just a head nod, not just a cursory acknowledgment.  So Palestinians, Palestinian Americans, immigrants, Native Americans, Black Americans, LGTBQI folk, religious and secular Jews, Mizrahi Jews, Jews of Color: all were welcomed, represented, visible, on the podiums, leading events, and participating in workshops.

Behind the scenes, dozens of JVP members had received “de-escalation” trainings for any conflict resolution that might be needed, and they were clearly identified with nametags, present everywhere JVP folks and friends were gathering.  And when JVP was under attack for daring to include and welcome two powerful Palestinian activists to the stage, Rasmea Odeh and Linda Sarsour, JVP and Palestinian activists were prepared to respond and support them. Not to step away from controversy and criticism, but welcome it with clear no-holds-barred answers.

Don’t avoid the hard questions.   What does feminism combined with support for Palestine look like?  How can we fight militarism here and also in Palestine?  What do “pinkwashing” “redwashing,” and “liberation” really mean and how do they challenge us? How do we respond to what Nick Estes (doctoral candidate at Univ of New Mexico, watch for his forthcoming book, Mni Wiconi: Water is Life, Death, and Liberation, 2017) authoritatively taught us: that  “violence begins and ends with the State,“ and “the fact that our resistance is criminalized hides the violence of the State.” Answering the hard questions, looking at the tough issues, means being willing to change the dialogue, find new words, and hang in there even through the tears.

In asking the hard questions, it’s crucial to parse out what we mean by intersectionality, and where are we missing or avoiding opportunities to support friends in their struggles for freedom and justice because we fear losing support from others.

A young Native American woman activist declared that she could not and would not allow Israel to take positions that seem to be pro- Native American struggles here, in order to purchase Native American loyalty to support a repressive occupation in Palestine. We heard others describe and reject “pinkwashing,” the Israeli government’s messaging about the supposedly gay-friendly society of Israel, propaganda that they hope will convince the LGBTQI community and their allies to ignore Israel’s oppression of the Palestinian people.

Throughout the weekend, JVP promoted their newest publication “On Anti-Semitism: Jewish Voice for Peace, Solidarity and the Struggle for Justice” and reminded us all this also is a conversation that must be included in our ongoing work for liberation and justice.

A final note about my experience that weekend: it was filled with lots of friends, hugs, and quick check ins with other United Methodists, including Doug Kerr from Ohio and Mark Harrison of the General Board of Church and Society. And I enjoyed passing out UMKR literature, also available on our website, and Rubik cubes, to illustrate for our friends that UMKR is working to align our church’s actions with our United Methodist values.

When I left the Hyatt Regency on Sunday evening, I felt surrounded with love, and well prepared to continue on this justice journey.  And asking myself: Can I imagine the day when justice comes to Palestine and will I be “all in” to bring that day closer?