In accordance with United Methodist guidelines
for initiating a boycott, UMKR wrote to the CEO
of General Mills, Pillsbury's parent company,
informing him of our concerns about the operations
of a Pillsbury factory in an Israeli settlement on
occupied Palestinian land and provid the company
with an opportunity to end its complicity the Israeli

occupation beforewe took the step of joining the

We write on behalf of United Methodists for Kairos Response (UMKR), a grassroots peace and

justice movement in the United Methodist Church. Our international movement is comprised of thousands of clergy and laity in dozens of annual conferences (regional bodies) across the United States and on the continents of Europe, Africa, and Asia. ¹

We are responding to the urgent call from Christians in Palestine, expressed in the Kairos Palestine Document, asking churches around the world to take principled actions that will help to end the Israeli occupation and achieve a just peace in the Holy Land.²  Our movement is seeking, through nonviolent means, freedom, justice and equality for all Palestinians and Israelis.

General Mills’ Complicity in Israel’s Illegal Settlement Enterprise
We are aware that there is a Pillsbury factory in the Atarot Industrial Zone, located on land that Israel occupied during the 1967 war and illegally annexed in 1970. This factory is exploiting land, water, and other resources that were captured by force from their legal Palestinian owners. By marketing these goods under the Pillsbury brand, General Mills is profiting from the illegal occupation of Palestinian territory.

For this reason, General Mills was one of the 112 companies named by the United Nations High Commissioner for Human Rights in a report requested by the U.N. Human Rights Council that cites companies doing business with and in Israeli settlements.³

Businesses that have established facilities in the settlements and their industrial zones serve a key role in sustaining the settlements, thereby facilitating and benefitting from Israel’s violations of international law and human rights.⁴

Given General Mills’ expressed commitment⁵ to the United Nations Guiding Principles on Business and Human Rights and to the Universal Declaration of Human Rights, it is disturbing that one of your manufacturing sites would be located in the same Israeli settlements that the United Nations Security Council has named a “flagrant violation of international law.” ⁶

General Mills’ companies, and the Pillsbury brand in particular, have been household names for generations in the U.S., and they are a source of products many in our movement and our church have enjoyed for decades.

With the publication of the U.N. list of occupation-complicit companies, as well as the growing awareness in civil society of the Palestinian cause, the reputation of General Mills and the power of the Pillsbury brand will be badly damaged by continued association with the demonstrably illegal Israeli settlements and the myriad human rights violations associated with those settlements.

Illegality of Israeli Settlements and Occupation
Israel prefers to distinguish between occupied land in that part of the West Bank known as “East Jerusalem” and the rest of the West Bank. But no such distinction exists legally, nor is it recognized by the overwhelming majority of the world’s governments.

International law pertaining to military occupation applies equally to all of the West Bank including East Jerusalem and, specifically, the Palestinian land that Israel confiscated for the Atarot Industrial Zone. That land belongs to Beit Hanina, a Palestinian town that Israel made into a neighborhood of Jerusalem and later split into two by the Separation Wall.

In 1967, the year that the Israeli occupation began, in Resolution 242, the UN Security Council unanimously called on Israel to withdraw from territories it had occupied in the Six Day War, citing the inadmissibility of acquisition of land by force. In 1979, UN Security Council Resolution 446 determined that the Israeli settlements in Palestine and the Golan Heights “have no legal validity.”
Hague Convention II forbids confiscation or appropriation of private property under military occupation. Under the Fourth Geneva Convention, Israel is forbidden from transferring its citizens to occupied territory, confiscating land in that territory, or attempting to change the status of occupied territory.

In 2004, the International Court of Justice affirmed that Israel’s attempts as the occupying power to change the status of Jerusalem are null and void and Israeli settlements “have been established in breach of international law.” ⁷  ⁸  ⁹  ¹⁰  ¹¹

Human Rights Violations and Palestinian Suffering
Israel’s illegal colonies and industrial zones are built on confiscated Palestinian land, and this colonization has forced hundreds of thousands of Palestinians from their homes and their land. It also has led to the destruction of vast areas of farmland and over one million olive trees.¹²

The Israeli-only settlements perpetuate a system of segregation and gross inequality between Palestinians and Israelis. Israel’s settlement enterprise has also led to cruelly limiting Palestinians’ access to water and making Palestinians virtual prisoners in their communities through a complex matrix of checkpoints, roadblocks, closures, curfews, and segregated roads. ¹³  ¹⁴

The Pillsbury factory in Atarot employs West Bank workers who must travel every day through that humiliating, exhausting system of military checkpoints. These factory workers do not enjoy the same legal protections as Israelis working under Israeli law. They are entirely dependent on their employer for security clearance to reach their jobs and to keep them.

It should be clear that General Mills continued presence in any Israeli settlement is inexcusable for a corporation that claims to “respect and acknowledge internationally recognized human rights principles.” ⁵

By doing business in the illegal Atarot industrial zone, your corporation is helping to sustain the settlement economy and perpetuating this system that denies Palestinians their basic human rights.

General Mills is exploiting this racist system for profit. United Methodists are calling for an end to this illegal and immoral exploitation.

Indeed, our denomination, the third largest church in the United States and twelfth largest in the world, has called for a global boycott of all products from these settlements located anywhere in occupied territory.

In a resolution adopted in 2012, the United Methodist Church:
“…calls on all nations to prohibit the import of products made by companies in Israeli settlements on Palestinian land, and we ask all companies that profit from and/or support settlements through their business activities to examine these and stop any business that contributes to serious violations of international law, promotes systemic discrimination, or otherwise supports ongoing military occupation.” (Emphasis added.)¹⁵

In our denomination’s Book of Discipline, the section of our Social Principles that describes Corporate Responsibility states:

“Corporations are responsible not only to their stockholders, but also to other stakeholders: their workers, suppliers, vendors, customers, the communities in which they do business, and for the earth, which supports them.  We support the public’s right to know what impact corporations have in these various arenas, so that people can make informed choices about which corporations to support.  We applaud corporations that voluntarily comply with standards that promote human well-being and protect the environment.” (Emphasis added.) ¹⁶

The Pillsbury Boycott
A coalition of faith-based and secular organizations and communities are initiating a boycott of Pillsbury products, to hold General Mills accountable for contributing to gross human rights violations against the Palestinian people, until your company ceases its operations in Israeli-occupied land. ¹⁷

We consider this boycott to be congruent with the goals of our movement and the positions and principles of our denomination.

UMKR calls on General Mills to take immediate action to remove any operations of your businesses from the Atarot Industrial Zone and from all Israeli-occupied territory. It is time for General Mills to stop doing business on stolen land!

We request your response regarding these important concerns by October 31, 2020.
After that time, if we have not received notification of General Mills’ intention to cease its complicity in the illegal Israeli occupation, UMKR will join the international boycott of Pillsbury products. We intend thereafter to launch a campaign that will build support for the Pillsbury boycott within our church and in civil society.

We hope to hear from you on these important matters of human rights and corporate responsibility. 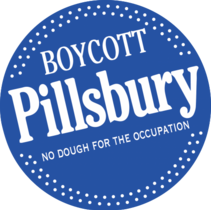