The West Bank Village of Wadi Foquin: Trying to Survive
by Zeina Azaam, in the Huffington Post
read it

Report from UMC General Board of Church and Society

As soccer grows in popularity in the U.S. and more fields sprout up around the country, in some places in the world building a field is not just about love of soccer, but about freedom. Such is the situation in Wadi Foquin, a small
agricultural village in the West Bank of the occupied Palestinian territories. The village council of Wadi Foquin began construction on a soccer field in the summer of 2015 to accompany a newly built park providing recreational space for their children, youth, and families. The soccer field is to serve not only Wadi Foquin, but also children and youth
from surrounding Palestinian villages—and even possibly Israeli children in a future extending equal rights to Palestinians. This vision prompted United Methodist partners to generate financial support for the project.

But in August, construction on the soccer field was halted when the village council received orders from Israeli occupation authorities to stop the project. The field was being built on land that fell under a 1,000-acre confiscation
order issued to West Bank villages in 2014 declaring the area “state land.” Confiscation orders are part of ongoing land annexation that is slowly erasing Palestinian territories from the map while increasing the footprint of Israel’s
illegal settlement project in the occupied West Bank. Just this past month another 370 acres were declared “state land” near Jericho in the Jordan Valley.

Previous land annexation in Wadi Foquin in the 1980s led to the construction of Betar Illit, one of the largest illegal settlements in the West Bank. Betar Illit now hosts 60,000 Israeli settlers, in contrast to the modest population of
1,300 in Wadi Foquin. Raw sewage runoff from the hillside settlement has harmed the agricultural life in the village — up to 150 farmers have reported damage to their produce. And to add insult to injury, in June the Israeli military accompanied bulldozers into the village to destroy 1,300 fruit trees on land owned by two farmers. Given the pattern of appropriation and destruction, villagers fear that forced removal from their land is an inevitable outcome of the runaway train called military occupation.
Members of the village of Wadi Foquin visited the U.S. and met with State Department officials in November 2013 to express their concern over land confiscation, settlement expansion, and the threat to their very existence. They
were told at that time that official U.S. policy was anchored in the peace talks facilitated by Secretary of State John Kerry. They were told that the issues in Wadi Foquin, and those in other villages, would hopefully be resolved by a
forthcoming peace agreement.

Those peace talks are now dead. Proposed French-led talks have so far been rebuffed by Prime Minister Netanyahu. Land confiscation and settlement expansion, however, are very much alive and have continued at an accelerated pace. One thing is crystal clear: A partner for peace does not confiscate another’s land and then build their own homes upon it. State Department spokesperson John Kirby underscored this conclusion in a press
briefing last month, stating, “We view Israeli settlement activity as illegitimate and counterproductive to the cause of
peace.”

A delegation from Wadi Foquin was in Washington, D.C. today, Feb. 23, to brief congressional offices on the latest encroachments upon their lives. Leading the delegation was Mayor Ahmad Sokar, who, at 32 years of age, is the youngest mayor in the West Bank. In addressing a group of Californians prior to his departure for Washington, D.C., Sokar remarked, “We come to speak to you as Palestinians—but more importantly, we also come to speak to you as human beings. Our children and youth deserve a future just as much as any other children and youth in the world.”

Palestinians have been treated as political pawns in Middle East politics far too long. With ongoing Israeli attempts to legitimize and legalize settlement construction, it is time for the best creative minds among U.S. lawmakers to craft concrete policy initiatives to address the illegality of settlement expansion and land confiscation. The public declarations of the State Department must be undergirded by policy initiatives that will give teeth to their words.

Yoshii is the chair of the Friends of Wadi Foquin and pastor of the Buena Vista United Methodist Church in Alameda, California.

Congressional Briefing on Wadi Foquin and

the impact of Settlement Expansion, February 2016 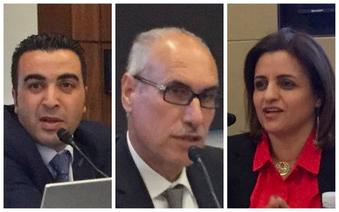 Report from Friends of Wadi Foquin

WASHINGTON, DC—On Tuesday, Feb. 23, a delegation from the Bethlehem district in
the occupied West Bank told a packed room of congressional staffers what daily life is like under the Israeli occupation and argued that Israel’s ongoing, illegal annexation of Palestinian land and settlement expansion are obstacles to any just resolution of the Israeli-Palestinian conflict. More than 45 staffers from the offices of 29 representatives and 9 senators attended the briefing at the Rayburn House Office Building, along with 25 representatives from Middle East peace and justice groups.

Speakers included Ahmad Sokar, mayor of Wadi Foquin; Shukri Radayda, director of the
Bethlehem Governorate; Kifah Manasra, a professor at Jericho’s Al-Estiklal University
and a native of Wadi Foquin now living in Bethlehem; and Rev. Dr. Susan Henry-Crowe,
general secretary for the United Methodist Church’s General Board of Church and
Society. The United Methodist Church has worked with Wadi Foquin for seven years
through the Friends of Wadi Foquin partnership, which was established to assist with community development and justice advocacy for this Palestinian Muslim village of 1,300 people. The interfaith briefing was moderated by Rev. Susan Wilder, coordinator of the Faith Forum on Middle East Policy, a network of Christian denominations and organizations working for a just peace in the Middle East.

After opening remarks by Friends of Wadi Foquin chair Rev. Michael Yoshii, Mayor
Sokar painted a picture of daily life in this agricultural village—showing photos of
farmers at work in their fields, women making apricot jam, children and youth engaged in
school and volunteer activities, preparations for a wedding, and a soccer field under
construction. Then he laid out the threats against it—showing maps of the planned path
of Israel’s separation wall through the west side of the village; and of Betar Illit, an illegal Jewish-only settlement expanding into the village on the east. Photos documented
the growth of Betar Illit, now estimated to hold 60,000 residents; raw sewage flowing
from the settlement onto farmers’ fields, making them unusable for agriculture; government-issued land-annexation orders on village farmlands and stop-work orders on
construction projects; a small playground overtaken by armed settlers; nonviolent protests
against annexation being met with tear gas; and the daily presence of occupation vehicles and soldiers.

Mr. Radayda, who oversees governance for all the communities in the Bethlehem district, presented a larger picture of Israeli land annexation and settlement construction throughout the West Bank, illustrating that what remains of the once-planned future Palestinian state is now a Swiss cheese map dotted with more than 200 Israeli-only settlements connected by Israeli-only highways. During a later question-and-answer session, he stated that the facts on the ground clearly indicate Israel is not interested in a two-state solution, but is headed in the direction of one apartheid state, which will eventually have to be met by challenges to its claim of being a democracy as well as a shift in governance to accommodate a pluralistic society.

Offering a rare glimpse into the lives of Palestinian women under occupation, Ms.
Manasra, a criminal psychology professor, discussed how occupation forces shame and
intimidate women at checkpoints so they will choose to remain at home, isolated and
underemployed, rather than risk harassment by traveling to more fulfilling jobs offering
greater independence outside their villages; and how the struggle for women’s rights is
often subjugated to the struggle for state’s rights, resulting in women suffering from
discrimination based on gender as well as ethnicity. She also talked about the psychological effects on children from the constant military presence and threat of arrests, and the pressure on mothers to keep their own suffering to themselves so they can be strong role models for their children.

Despite the grim reality they presented, all the Palestinian speakers expressed optimism
for the campaign to save Wadi Foquin and confidence in the eventual end of the
occupation and establishment of equal rights for all. Rev. Dr. Susan Henry-Crowe of the
United Methodist Church closed the presentation by sharing her own observations about Wadi Foquin and the West Bank from a recent trip she made there, underscoring the
other panelists’ statements as well as the church’s role in opposing the occupation and the
settlements through witness, advocacy, and boycott.

Fahmi Manasra, one of the founders of the Wadi Foquin partnership and a participant in
the Bethlehem delegation’s speaking tour leading up to the briefing, served as translator
and participated in the Q & A afterward. Hebron mayor Dr. Daoud Al Zatari, who
happened to be in Washington, DC, for meetings that week, also spoke during the Q & A, echoing the panelists’ desires for freedom and equal rights. Hebron is the largest city in
the West Bank, with a population of 250,000 people in the city itself and 800,000 in the
district.

The briefing was sponsored by Friends of Wadi Foquin, the General Board of Church and
Society of the United Methodist Church, Faith Forum on Middle East Policy, US Campaign to End the Israeli Occupation, and Churches for Middle East Peace (CMEP). 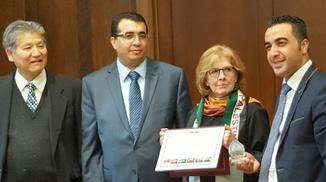