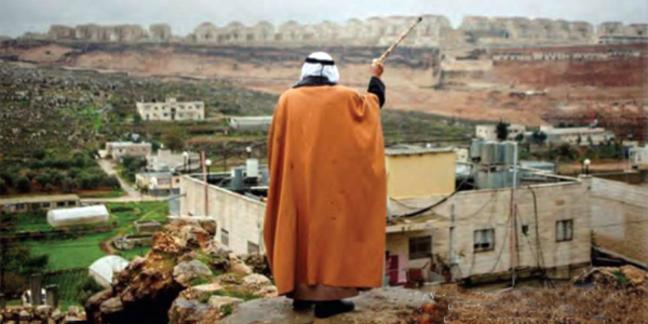 Above: West Bank village of Wadi Foquin is overwhelmed by surrounding, expanding settlements

Violence in Israel and the occupied West Bank is escalating daily, leaving Israelis and Palestinians dead and injured and fanning the flames for even more violence. At the same time, land confiscation, settlement expansion, and home demolitions continue in the West Bank, with Israel resuming its practice of demolishing homes as a punitive measure.

As people of faith, we must speak and act to preserve life and prevent further suffering. To that end, it is crucial that we address the root causes for the violence.

A Capitol Hill briefing will be held on Nov. 24, 2014, on the issue of land confiscation, specifically the recent actions that threaten the West Bank village of Wadi Foquin and neighboring areas near Bethlehem.

This is an important opportunity for members of Congress to become informed on the underlying issues that are at the root of the currently escalating violence.

MAKE SURE they know their constituents (that's you!) want them to attend.

YOUR ACTION: Contact your members of Congress and
ask them to attend this important briefing!

Send the message to your Senators and Representative,
quickly and easily. [Editor's note: This alert is past.]

BACKGROUND ON THIS BRIEFING

Four days after the ceasefire took effect in Gaza late this summer, Israel announced it would expropriate 1,000 acres of Palestinian land in the Bethlehem district of the West Bank. The land annexation is intended for settlement expansion in violation of international law, which prohibits such actions in occupied territories. The area is currently in agricultural use by five Palestinian villages — Wadi Foquin, Husan, Nahalin, Surif, and Jab’a — supporting families and a rural way of life as it has for many generations.

This action was foreshadowed a year ago, when residents of Wadi Foquin travelled to Washington D.C. to
describe the existential threat expanding settlements posed to their homes, their families, and their livelihood.

Since 1967 every U.S. administration has opposed the settlements and has viewed settlement expansion as a major obstacle to peace in the region. The U.S. State Department has strongly urged Israel to reverse this latest action of land expropriation. The briefing will provide members with general information on the settlement enterprise and the specific impact of this latest action on Wadi Foquin and neighboring villages in the West Bethlehem district.

Ask your Senators and Representative to attend this briefing on Monday afternoon, November 24th » click here

Sponsored By:
Friends of Wadi Foquin
General Board of Church and Society (GBCS)

Faith in Action, UMC General Board of Church & Society

Above: A Wadi Foquin resident points to the quickly rising buildings of the Betar Illit Israeli settlement that is taking the village land by force. (Photo New World Outlook courtesy of CDP Wadi Foquin)

Land confiscation orders were issued Aug. 31 by the Israeli government for settlement expansion in the West Bethlehem District of the Occupied Palestinian Territories. The action will annex nearly 1,000 acres of Palestinian land.

Through our efforts, Wadi Foquin has been designated as a community development site through GBGM, as well as an "Advance" site for giving.
We also organized a Capitol Hill briefing about Wadi Foquin in November 2013 that addressed the impact of the Israeli military occupation and the existential threats facing the village.

FOWF is in direct communication with the village. We have been receiving daily updates since the confiscation orders were issued.

The village council is filing court papers in objection to the confiscation orders. It is also consulting an attorney to work through the legal process, and is organizing public demonstrations in the village.

In collaboration with FOWF, the village council is planning a speaking tour to raise consciousness about the situation, and to raise funds for the community development projects in the village.

Projects had been put on hold during the Gaza siege, but the council has resolved to continue work on them as a sign of its resistance to the theft of its land.

We have an opportunity to help Wadi Foquin with this while also creating venues to facilitate the voices of its people being heard. We are in the process of setting up a speaking tour in the United States for residents of Wadi Foquin.

In addition, FOWF is planning to organize another Capitol Hill briefing to amplify their voices and educate members of Congress about the specific situation in Wadi Foquin. The briefing will explain why U.S. policy needs to change to reverse the immoral treatment of the Palestinian people.
November elections

Our goal is to hold the briefing after the November elections, which will coincide with the speaking tour. This briefing will build on the efforts that were organized last year.

We ask your help in contacting congressional offices for the following actions:
•    Sponsorship and/or support for a November briefing, and
•    join in a collective voice to rescind the confiscation orders, and oppose further settlement expansion.

FOWF has prepared a sample letter that you can send as an individual, congregation, or organization to your members of Congress. Please feel free to edit it to suit your particular needs.

We encourage you to write letters on church letterhead, and scan and email to the offices of your members of Congress to request a meeting to discuss our proposals. It is important to identify possible supporters for our efforts first.

Larger mass email blasts will be encouraged as a second phase of advocacy.
If you have any questions or want to update us on any communication with your members of Congress: send an email to friendsofwadifoquin@gmail.com.
Also, please let us know if you are open to hosting speakers from Wadi Foquin during November.

You can read more about Friends of Wadi Foquine and last year’s U.S. Capitol Hill briefing at www.friendsofwadifoquin.com.

New World Outlook magazine featured Wadi Foquin in its Nov. 1, 2013, edition. You can read its story at A Window of Hope in Wadi Foquin.

You can learn more about the most recent confiscation of land in the Occupied Palestinian Territories at the following:

United Methodist Resolution #6111, “Opposition to Israeli Settlements in Palestinian Land” states that the denomination opposes continued military occupation of the West Bank, Gaza, and East Jerusalem, the confiscation of Palestinian land and water resources, the destruction of Palestinian homes, the continued building of illegal Jewish settlements, and any vision of a “Greater Israel” that includes the occupied territories and the whole of Jerusalem and its surroundings.