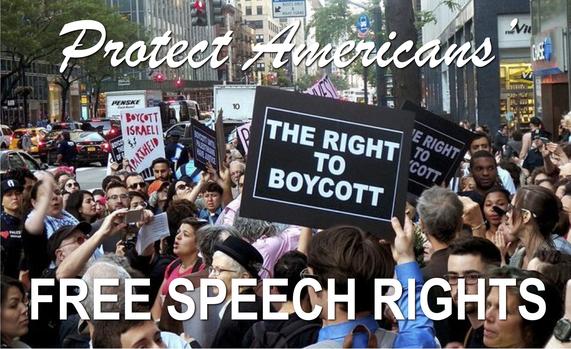 ​Download this statement
See our 2017 Action for Free Speech

For more on this issue, see the menu under"Political Action​" in our navigation bar

JANUARY 2019 – We are members of faith communities in the United States whose congregations or denominations have adopted resolutions to boycott products made in Israeli settlements—built on occupied Palestinian lands in violation of international law and longstanding official U.S. policy—or have implemented a screen to divest from companies that profit from the decades-old Israeli military occupation of Palestine. These resolutions affirm our commitment to a just peace for all Palestinians and Israelis.

We are alarmed by attempts to pass legislation in the U.S. Congress that would provide legal protection for states that are penalizing participation in the nonviolent, grassroots Boycott, Divestment, and Sanctions (BDS) movement for Palestinian rights.

The U.S. Supreme Court has established that boycott actions addressing injustice are a protected form of speech under the First Amendment of the U.S. Constitution and that American citizens are free to express their political and ethical beliefs by engaging in such boycotts.

Nevertheless, twenty-six states have instituted legal provisions that would penalize Americans – often by denying them access to jobs, contracts, and other opportunities the state offers – if they support boycotts addressing Palestinian human rights or if they simply refuse to pledge in writing that they do not support such boycotts. Restricting American citizens’ access to those opportunities on the basis of our political beliefs is a severe violation of our first amendment rights.

As of November 2018, thirteen other states have considered or are considering placing restrictions on their citizens’ right to support such boycotts.

The first bill introduced in the U.S. Senate in 2019, S.1 - Strengthening America's Security in the Middle East Act of 2019, seeks to provide legality for these unconstitutional state provisions. Thus far, this bill has failed to garner sufficient support in the Senate, but that failure was on tactical grounds related to the government shutdown, and the legislation is very likely to be reintroduced.

The American Civil Liberties Union (ACLU) issued a recent statement about this bill that reads, in part, as follows:

In the midst of a partial government shutdown, Democratic and Republican senators have
decided that one of their first orders of business should be to sneak through a bill that would weaken Americans' First Amendment protections. The bill, Combatting BDS [Boycott, Divestment, and Sanctions] Act, encourages states to adopt the very same anti-boycott laws that two federal courts blocked on First Amendment grounds.

Anti-BDS legislation effectively penalizes actions taken by the Presbyterian Church (U.S.A.), the United Methodist Church, the Mennonite Church USA, the United Church of Christ, and other denominations; and tens of thousands of Muslim, Jewish, Christian, and secular Americans who support boycotts and divestment aimed at ending Israel’s violations of Palestinian human rights.

As faith leaders, we have long used the nonviolent instruments of boycott and divestment in our work for justice and peace. These economic measures have proven to be powerful tools for social change, from strengthening labor rights for farm workers to ending apartheid in South Africa. As has been warned by the ACLU and other civil liberties groups, anti-BDS legislation is an extremely grave attack on free speech that threatens the use of boycotts, divestment, and sanctions for other peace and human justice causes.

WE CALL ON ALL AMERICANS to join us and the ACLU in defending our First Amendment right to freedom of speech. Urge your Senators to reject anti-BDS legislation as an infringement on the rights of American citizens.