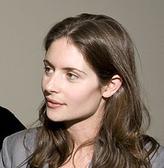 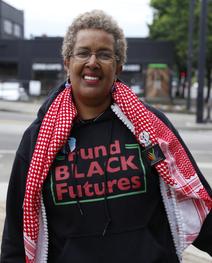 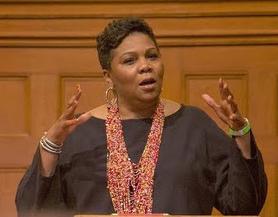 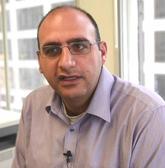 ​Just preceding USCPR’s 2018 national conference (read UMKR’s report), Friends of Sabeel North America (FOSNA) hosted Prophetic Action: Christians Convening for Palestine in St. Paul, MN on Sept 27-28: a gathering of over 100 leaders and activists for Palestinian rights from across the United States who came together to explore how to strengthen local and national organizing for Palestine, with an appropriate and strong focus on church activism.

UMKR provided support for the attendance of two leaders who also attended the immediately following USCPR conference in St. Paul, Together We Rise: Denise Nicole Stone, a Boston University student from the Western Pennsylvania Conference of the UMC, and M. Theresa Basile of the UMKR Steering Committee and the California-Pacific Conference.

speaker, leader in the Black Lives Matter Movement, and

for the United Church of Christ, delivered the opening

which beautifully set the tone for the two-day gathering.

Blackmon spoke powerfully on the treatment of people

with dark skin in the United States and Palestine, and

solidarity between these communities, such as the tweets from young people in Palestine to African Americans in Ferguson and St. Louis, Missouri, advising them on how to deal with tear gas and other protective tactics they could use as their protests following the police shooting of Michael Brown were met with the militarized state violence that Palestinians know too well.

Describing how these mutual struggles against oppression are characterized by those in power, Blackmon shared a story about a hunter and a lion, concluding with: “The hunter speaks of uprising, the hunted of occupation.” Applying this example to activism by people of faith, she said they must to take responsibility for the ways that their own scriptural texts are used to serve or excuse oppression. She posed the challenging question: “What do we do with uncomfortable texts?”  Recognizing that the hunter's story, the message of those in power, teaches us to blame the lion, the oppressed, for its own demise, we cannot allow the Bible to be used in the same way. She declared, “God wants justice, of that we can be sure….At this FOSNA conference, let us examine the texts we call holy and seek to find God there.”

A well-attended workshop that offered valuable education for every social activist, Don't Talk about Palestine: Effective Messaging, from Institute for Middle East Understanding (IMEU), built upon the subject from Blackmon’s address: appropriate and positive messaging about the struggles of the oppressed. Participants received practical advice – "Describe what you seek, not what you oppose" – on how to avoid the pitfalls of engaging with opponents’ terms and talking points and how to redirect listeners’ and readers’ attention to the most important messages we can convey to move the public to positions of understanding, support, and action.

Another popular workshop was No Way to Treat a Child:

A Model for Congressional Advocacy, co-presented by

Linda Kateeb, a long-time instructor in high risk schools in

southside Chicago and a frequent visitor to Palestine who has lead

an attorney in Chicago who specializes in discrimination and

harassment employment issues, and a tireless activist engaged with a dozen or more national and Chicago-based justice organizations and movements.

campaign No Way to Treat a Child, organized by Defense for

Children International–Palestine (DCI-Palestine) and American Friends Service Committee (AFSC), This campaign has presented several Congressional briefings to packed rooms on the Hill, on the subject of the abuse of Palestinian children in Israeli military detention, which has grown to be a widely supported national issue in the United States. Working with US Campaign for Palestinian Rights and other partners, the NWTTC campaign spearheaded the first-ever Congressional bill for Palestinian human rights: The Promoting Human Rights by Ending Israeli Military Detention of Palestinian Children Act (H.R. 4391), which has garnered 30 sponsors in Congress since it was originally introduced in 2017 by Rep. Betty McCollum of Minnesota.
Learn more about the No Way to Treat a Child campaign.

The plenary session on Centering Palestinian Voices discussed: “What is the current reality for Palestinians on the ground and in the diaspora? What does this mean for the Palestine solidarity movement?” and appropriately included an all-Palestinian panel:
Tarek Abuata, Executive Director of FOSNA, formerly of the Palestinian Christian Alliance for Peace (PCAP), who has also worked with Christian Peacemaker Teams, the United Palestine Appeal, and the Negotiations Support Unit of the Palestinian Authority, where he researched legal and policy issues.
Ramah Awad, a researcher in the American Friends Service Committee's Economic Activism program and an organizer with the Palestinian Youth Movement in the Bay Area and nationally; and
Lara Kiswani, Executive Director of the Arab Resource & Organizing Center (AROC), a cofounder Students for Justice in Palestine who helped to organize the Third World Forum at UC Davis, and a lecturer at San Francisco State University.

Prophetic Action  included a racially diverse lineup of speakers, such as:
Native American Rev. Jim Bear Jacobs (photo) from the Racial Justice program of the Minnesota Council of Churches, a member of the Stockbridge-Munsee Mohican Nation in Wisconsin, and a cultural facilitator in the Twin Cities who works to raise the public’s awareness of American Indian causes and injustices;

African American Rev. Nyle Fort (photo), a minister, organizer and scholar who researches race, religion, and American politics and is committed to global transformative justice, participated in the Vatican III World Meeting of Popular Movements (WMPM, has been widely published in academic journals;

Palestinian-American Sandra Tamari (photo), Director of Strategic Partnerships at the Adalah Justice Project (AJP) and co-chair of US Campaign for Palestinian Rights, lived and worked in the West Bank and Jordan for two years as a Fulbright scholar. A co-founder of the St. Louis Palestine Solidarity Committee, since the murder of Mike Brown in Ferguson in August 2014, Sandra has focused on building joint liberation efforts between Palestinians and Black Americans.

Jewish-American organizer Anna Baltzer (photo), Director of Organizing & Advocacy at the US Campaign for Palestinian Rights (USCPR) who has lectured at more than 500 venues on five continents with her presentation and film, "Life in Occupied Palestine: Eyewitness Stories & Photos" and is the award-winning author of the book “Witness in Palestine: A Jewish American Woman in the Occupied Territories,” based on her experiences with the International Women's Peace Service in the West Bank.

Joining these diverse U.S. speakers was Palestinian organizer Omar Haramy, the Administrator of the Sabeel Ecumenical Liberation Theology Center in Jerusalem (for which FOSNA is named), who traveled to St Paul from Palestine to present Sabeel’s ambitious new program, Kumi Now.

Haramy described this initiative, to be launched by Sabeel in October 2018, as a response to the dire and worsening situation for the Palestinian people, and their growing sense of hopelessness. The name of the project comes from the biblical account of Jesus raising a child from the dead with the command “Talitha Kumi!” or “Little girl, rise up!” Drawing on the global strength of supportive organizations, Sabeel will disseminate weekly actions that advocates for Palestinian rights can take in their local communities. A year’s worth of actions have also been collected in a book that can be ordered from Sabeel. These actions were created and submitted to Sabeel from a broad and diverse network of groups in Palestine and worldwide and include some refreshingly innovative ideas for action.

The Kumi Now project is founded on these three values:
• Inclusivity: everyone is welcome to join the movement.
• Justice: based on international law, ending the occupation (including Gaza, the West Bank and East Jerusalem), the right of return, and equal rights for all citizens of Israel.
• Nonviolent resistance: a commitment to using nonviolence as the only form of resistance.

When roughly half a dozen United Methodists met for lunch during this FOSNA conference, they agreed on a recommendation for UMKR, to widely promote the inspiring Kumi Now project.

All supporters of human rights in Israel/Palestine are invited to Rise Up!
Learn more about Kumi Now, watch their introductory video, read the Bible study, and sign up to participate in the weekly worldwide action, at their website: https://kuminow.com. 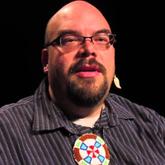 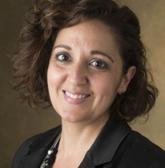 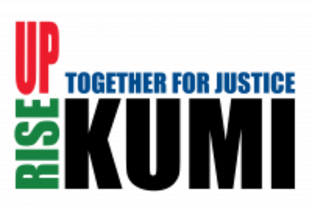