ABOUT OUR NEWS SOURCES
The articles we include in our lists to 'Read More' – in our newsletters and on our website – are provided as an informational service for our readers, and the views expressed may or may not be shared by UMKR.
Some selections may be repetitive;because some periodicals have paywalls, we provide a variety of sources in the hope that every reader will find some of them accessible, with or without a subscription. 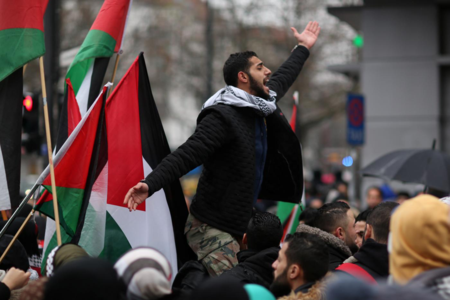 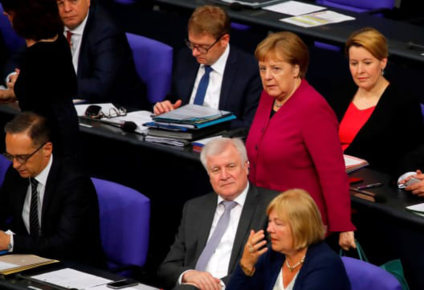 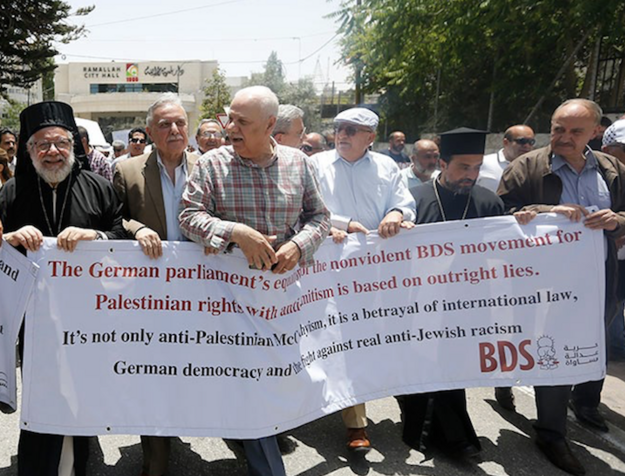 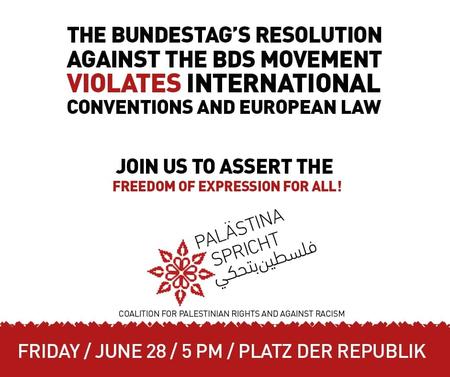 On May 17, 2019, in a misguided response to increasing anti-Semitic incidents in Germany and across Europe as well as strong Israeli lobbying, the primary chamber of

the German parliament, the Bundestag, passed a non-binding resolution that denounces the BDS (boycott, divestment and sanctions) movement for Palestinian

human rights as anti-Semitic, comparing it to actions seen during Germany’s Nazi era and calling for a ban on government funding for projects associated with the movement.

The first of its kind by a major European government, the resolution titled “Resisting the BDS movement decisively – fighting anti-Semitism,” has generated a firestorm of response from the Palestinian Authority and bodies that span all of Palestinian society, as well as hundreds of Jewish and Israeli scholars. Critics have charged that it violates international legal conventions, European Union law, and the Germany constitution.

Kairos Palestine has responded that “Christians in Palestine are saddened and confused” by the Germans’ resolution, stating: “the Palestinian BDS movement embraces the logic of peaceful means of resistance.” They urge the Bundestag to reverse the resolution and asked: “What other avenue would our German brothers and sisters ask us to take in order to overcome this historic injustice…?”

The public statement from the Palestinian Foreign Ministry says that the German resolution “disregards the fact that Israel is a state of ethnic cleansing, a state of racial discrimination, an outlawed state that commits crimes against the Palestinian people and occupies the Palestinian land while going unpunished.”

Senior Palestinian official and chief negotiator Saeb Erekat stated: "We find this resolution to be utterly biased, void of any context and an affront to the right to freedom of expression,” and described the resolution as "a clear move towards criminalizing boycott, a peaceful and legal tool in the struggle against the Israeli occupation.”

Ironically, just five months ago in December 2018, a German court confirmed that BDS advocacy falls under the rights to freedom of expression and assembly protected by the German constitution.

Also challenging the recent German resolution is the 2016 statement from the European Commission, the executive body of the European Union, in response to a Parliamentary Question submitted by a representative of Northern Ireland in the European Parliament. In her “Question for written answer,” Martina Anderson noted that “more than 350 European civil society organisations recently released a statement regarding the need for the EU to protect the right to freedom of expression for BDS activists” and asked “Will the Commission commit to defending BDS activists' right to exercise their democratic freedom of expression?”  The written response on behalf of the Commission from Vice-President Federica Mogherini states: “The EU stands firm in protecting freedom of expression and freedom of association in line with the Charter of Fundamental Rights of the European Union, which is applicable on EU Member States' territory, including with regard to BDS actions carried out on this territory.”

was brought by Chancellor Angela

Merkel’s party and supported by

Germany’s other largest party as

and most in the Israeli government

and Israel is urging the German

government to implement it.

However, at least one Israeli lawmaker

of the left-wing Meretz party sent a

letter to German leaders calling this legislation ”disturbing and destructive for the possibility of peace here on the ground.” Former Israeli Ambassador Ilan Baruch wrote to Germany's former Foreign Minister, stating: "In Germany, permeated with guilt toward the Jews and Israel, equating BDS – however much we oppose it – and anti-Semitism … has no moral basis….There are anti-Semites who are friends of the Netanyahu government… and there are Jewish supporters of BDS. The fact that there are anti-Semites who are present in the BDS movement doesn't make it anti-Semitic. It is anti-Israel.”

While some might welcome Baruch’s assessment, there are also many who have had a role in the movement who would object to the movement’s description as “anti-Israel.” Many church organizations have taken actions of divestment and called for boycotts that target Israel’s decades-long military occupation of Palestinian territories and extensive violations of Palestinian human rights, but those actions should not be characterized as “anti-Israel.” Rather they are anti-apartheid, -colonialism, and -ethnic cleansing, and pro-universal human rights, - international law, supporting freedom, justice and equality for all Palestinians and Israelis.

Indeed, peace and justice advocates in Israel have welcomed the divestment and boycott actions by Christian denominations as being in the best interests of Israelis, taken with a view to achieving a just and lasting peace between Israel and its neighbors.

Hundreds of Israeli and other Jewish scholars including “leading researchers in anti-Semitism,” while noting that they have differing personal positions on the BDS movement, have publicly expressed to German leaders: “we all reject the deceitful allegation that BDS as such is anti-Semitic and maintain that boycotts are a legitimate and non-violent tool of resistance….it should also be noted that many Jewish and Israeli individuals and groups either support BDS explicitly, or defend the right to support it. We consider it inappropriate and offensive when German governmental and parliamentary institutions label them anti-Semitic.”

There have already been some activist responses within Germany to this resolution, and Palästina Sprecht (Palestine Speaks) is organizing a public protest for 28 June. It remains to be seen whether the outcry from German citizens, Palestinian leaders and organizations, and Jewish scholars will be heeded by the German government as it deliberates whether to enforce the non-binding resolution, which the Israeli government is lobbying Germany to do.

(The Bundestag) decision on

the boycott movements is a bias

and racial discrimination
[The PNC is the legislative body

of the PLO, the official international representative of the Palestinian people.]

Kairos Palestine: A Call for the German Bundestag to Reverse its May 17, 2019 Resolution

60 Jewish and Israeli Scholars:  Call to German Parties Not to Equate BDS

Call to the German Government by 240 Jewish and Israeli Scholars:

Palästina Sprecht (Palestine Speaks): We call on the German government

to fight racism and apartheid – not those who oppose them

Counterpunch: On Equating BDS With Anti-Semitism: a Letter to the Members

Haaretz: Editorial Board: A Win for Deniers of the Occupation

Palestine Chronicle: Perpetuating Racism: the Motivations behind the

Haaretz: Germany Is Betraying the Fight Against anti-Semitism

Haaretz: In Germany, a Non-violent Struggle Against War Crimes

Could Be Declared Illegal

of Minimizing the Holocaust

Haaretz: Shame on You, Germany

Middle East Eye: The reasons behind Germany's condemnation of BDS

+972 Magazine: In Germany, the anti-BDS zeitgeist has taken over

ON ENFORCING THE GERMAN RESOLUTION