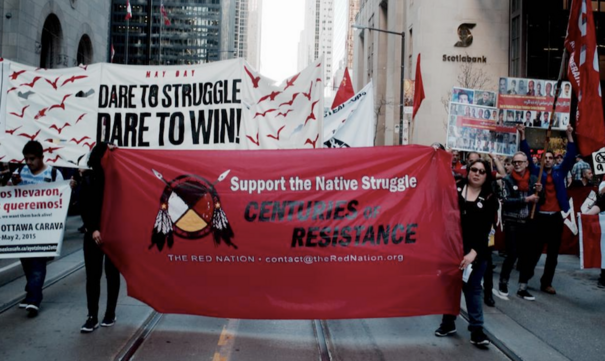 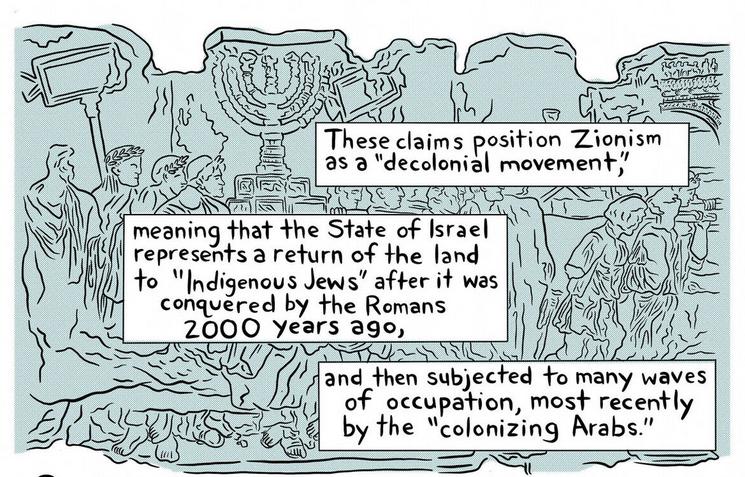 The Red Nation Supports the Liberation of Palestine and BDS: The Liberation of Palestine Represents an Alternative Path for Native Nations
Statement 6 December 2019
The Red Nation urges all Native people and Nations to respect the Palestinian call for BDS by pledging NOT to collaborate with universities, institutions, or organizations that promote and normalize the occupation.

[UMKR Note: This article is included also on our primary page for Indigenous Solidarity. for it covers multiple subjects. We include it here for the content about red-washing and the support some indigenous american leaders provide to the Israeli narrative.]

.....Palestine is the moral barometer of Indigenous North America. While there is widespread agreement among Native people that European colonialism and Indigenous genocide is criminal and immoral, there are a surprisingly high number of Native politicians, elites, and public figures who don’t extend the same sympathies to Palestinians, Arabs, and Muslims. They range from outright Zionists who support Palestinian ethnic cleansing to liberal centrists who don’t support Palestinian rights of protest and resistance.

Comic: When Settler Becomes Native
Examining the claim of Jewish indigeneity in the land of Israel

Some quotes from the comic:
Indigeneity doesn't mean only one thing.
"Indigenous is a category that has come to describe peoples around the world colonized after the emergence of modern imperialism in the 15th century, and who are fighting for self-determination and a return of land stewardship.
An oppositional, place-based existence, along with the consciousness of being in a struggle against the dispossessing and demeaning fact of colonization by foreign peoples."
Taiaiake Alfred and Jeff Corntassel
Being Indigenous: Resurgences against Contemporary Colonialism (2005)

.... indigeneity isn't just about identification with a territory. It describes a particular relationship to colonial history and the colonial present. It's about naming power relationships in present-day conflicts over land sovereignty.
Divorcing the term from this context simultaneously erases Indigenous struggles and forments a dangerous idea of nativity in which white settlers not only replace indigenous people but come to identify as native.
See the comic at Jewish Currents
See also four thought-provoking letters to the editor about this comic

.....One such frequently recurring theme when discussing the historic narratives of both peoples, is the question of “who was there first?”. The implication being, whoever was there first deserves ownership of the land. I have lost count of how many times I have encountered the argument that “The Jewish people have been in Palestine before the Muslims/Arabs,” or a variation thereof. This has always struck me as an interesting example of how people learn just enough history to support their world view, separating it completely from any historical context or the larger picture of the region.
See more

.....Indigenous people are not the only ones exploited in this campaign, run by SSI (Students Supporting Israel). SSI is the new kid on the block of campus hasbara groups (only five years old) but this kid is well funded by the usual suspects. A notable amount of the $319,598 in 2015 contributions SSI reported on tax forms comes, for instance, from the Milstein Family Foundation, which also supports CAMERA, Stand with Us, Hasbara Fellowships, and other right-wing Israel advocates. The mission of SSI, as their webpage indicates, is “to be a clear and confident Pro-Israel voice on college campuses,” and for this mission, they even offer scholarships for students “to visit Israel and come back to campus ready for action!” Nothing on the webpage, however, mentions what SSI’s current campaign at Columbia University makes clear beyond all doubt: that the organization has decided to shamelessly appropriate histories, narratives, political symbols and imagery of indigenous people, Native Americans, Africans, and even Palestinians for the purpose of producing a fictitious, if colorful, narrative of Jewish indigeneity and self-Orientalization.
See more

From Palestine to Canada, the truth of indigenous narratives cannot be suppressed forever
Ahmad Moussa  •  Middle East Eye  •  21 May 2018

[UMKR note: portions of this article touch on Indigenous Americans' normalization of or collaboration with Zionism, condoning and supporting Zionist claims to historic Palestine.]
One of the tactics that Israel uses to export its destruction of Palestinian memories is ideological colonialism of indigenous peoples around the world. A recent Tablet article discussed the visit of a Native American chief to Israel, in which he demanded: "The Arab occupation must be stopped and Samaria should be returned to the Jewish people as they have restored Jerusalem and the rest of the country to its owners." Similarly, Phil Fontaine, the former Assembly of First Nations chief turned oil pipeline supporter, was invited to visit Israel by the Canadian Jewish Congress and proclaimed a similarity between Canada’s indigenous peoples and Israel.

A group of prominent scholars has written to Navajo Nation President Ben Shelly expressing disappointment at his support for Israel and urging him to pursue international relationships that mirror indigenous values and justice.
.....
The scholars refuted Shelly’s statement that the Israelis “were no different than we are,” asserting instead that the Indigenous Peoples’ experience parallels what has happened to the occupied Palestinians. The Diné people, like the other Indigenous Peoples represented by the scholars have suffered through the process of settlement, colonization, or militarization of their homelands, the group wrote. “Thanks to the wisdom of our ancestors, we have persisted. But our prospects as peoples will never be as full or complete as they might have been had those who colonized us been just and honest in their dealings with us. A similar process has unfolded for Palestinian people over the past half-century. Indeed, Israel demolition of the homes of Palestinian families is not all that different than the Long Walk your people endured in 1864. Your collusion with the Israeli government is a betrayal of that shared history and of the wisdom that has helped all Indigenous Peoples survive for centuries,” the scholars wrote.
See more

Since the adoption of the council of Native and Indigenous Studies Association (NAISA) issued a declaration in support of the global academic and cultural boycott of Israeli institutions in 2013, a new crop of digital outliers have embarked on a small but seemingly full-time campaign to persuade Native and Indigenous peoples in North America to rather become supporters of the Israeli State, Zionism, and disavow any solidarity with the Palestinian people.
.....
A central claim is that the Zionists (sometimes conflated as just ‘Jews’) are native and indigenous to Palestine, and that Palestinians are invaders. Consequently, Native Peoples should stand with Jews, Zionism and the Israeli state, not with the Palestinians.
See more 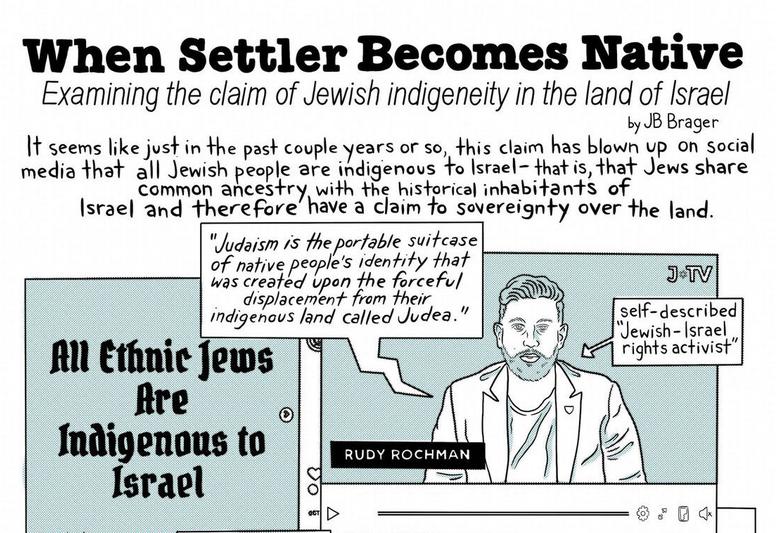 Brownwashing and Indigenous
Normalization of Zionism 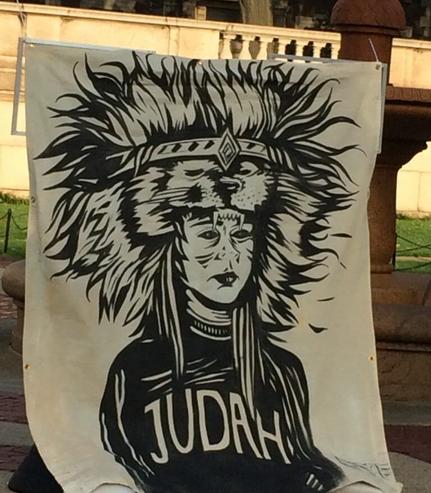 ▶︎  Indigenous Solidarity:See it
▶︎  The UMC and Indigenous Peoples See it

In recent years, a disturbing trend has been seen in social media, in campus organizing and elsewhere, sometimes called redwashing or brownwashing: the attempt by Zionist Jews to appropriate the identity of indigeneity, whereby they, the colonizers, take on the righteous cause of a disenfranchized and dispossessed people reclaiming their homeland from those who usurped their relationship with the land.

In this reversal of reality, the Palestinians are considered invaders and native peoples in North America are encouraged to stand with Jews, Zionism and the Israeli state, not with the Palestinians.

What is wrong with that picture?

Essentially, describing people as the Indigenous people of their land does not just mean they were born there or have many ancestors who were born there. Part of the indigenous identity is the resistance of peoples with long-standing ties to their land against European-based racist global colonialism, which began spreading around the world in the 15th century and has not stopped to this day.

That understanding of indigeneity does not describe the Zionists who came to colonize Palestine in the 20th century. It describes the Palestinians who were and are still being dispossessed of their homeland.

On this page we have a few writings on this topic and welcome your suggestions of others. Contact us at info@kairosresponse.org