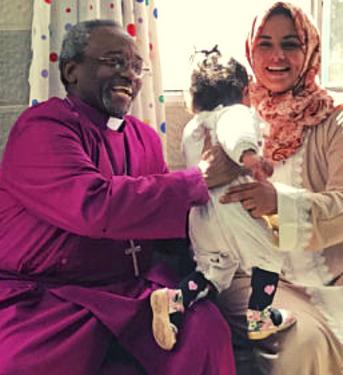 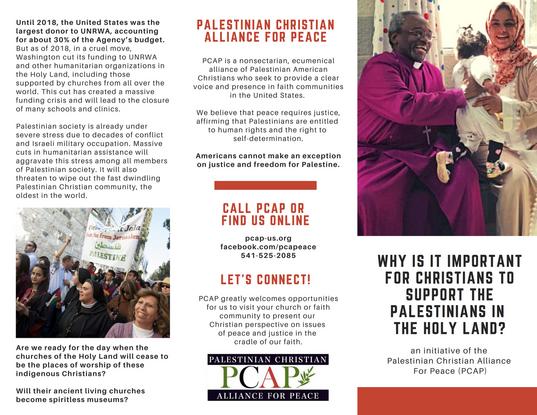 Below you can read the contents of PCAP's brochure and farther down,
see images of the tri-fold brochure.

WHY IS IT IMPORTANT
FOR CHRISTIANS

TO SUPPORT
THE PALESTINIANS

IN THE HOLY LAND?
an initiative of the Palestinian Christian

humanitarian assistance to the
Palestinian people. This withholding

of vital humanitarian aid as a tool of

As Palestinian Christians, we believe in the dignity of all people and that it is our duty to stand in solidarity with those suffering from injustice, as Jesus taught us.

PCAP calls on people of conscience to show that Americans will not condone a policy that punishes innocent refugees to serve political purposes.

You can help by making a donation to keep UNRWA assistance flowing to Palestinian refugees. Donate online at unrwausa.org

UNRWA USA is a 501c3 tax-exempt American nonprofit that directly supports the work of UNRWA.

WHO ARE PALESTINIAN REFUGEES?
Millions of Palestinians, who constitute the largest and longest suffering refugee community in the world, depend on UNRWA for vital health and education services, food assistance, vocational training, and jobs.

Since 1948, over half the Palestinian population was driven out of their hometowns and villages, which fell under the control of the newly created State of Israel. Despite international consensus, enshrined in multiple United Nations resolutions, Palestinian refugees were not allowed to return to
their homes.

To respond to their specific plight, the United Nations Relief and Works Agency for Palestine Refugees in the Near East (UNRWA) was created in 1949. When the Agency began operations in 1950, it served a population of 750,000 refugees – including Palestinian Muslims and Christians. Today, that number has increased to more than 5 million.

• UNRWA teaches more than 526,000 refugee children in the largest and one of the highest achieving public school systems in the Middle East.

Until 2018, the United States was the largest donor to UNRWA, accounting for about 30% of the Agency’s budget. But as of 2018, in a cruel move, Washington cut its funding to UNRWA and other humanitarian organizations in the Holy Land, including those supported by churches from all over the world. This cut has created a massive funding crisis and will lead to the closure of many schools and clinics.

Palestinian society is already under severe stress due to decades of conflict and Israeli military occupation. Massive cuts in humanitarian assistance will aggravate this stress among all members of Palestinian society. It will also threaten to wipe out the fast dwindling Palestinian

Christian community, the oldest in the world.

to be the places of worship of these indigenous Christians?

PALESTINIAN CHRISTIAN ALLIANCE FOR PEACE
PCAP is a nonsectarian, ecumenical alliance of Palestinian American Christians who seek to provide a clear voice and presence in faith communities in the United States.

We believe that peace requires justice, affirming that Palestinians are entitled to human rights and the right to self-determination. Americans cannot make an exception on justice and freedom for Palestine.

PCAP greatly welcomes opportunities for us to visit your church or faith community to present our Christian perspective on issues of peace and justice in the cradle of our faith.

Palestinian Christian Alliance for Peace (PCAP), a valued and long-time UMKR partner, has launched an important campaign in 2019 to raise awareness of the United Nations agency UNRWA, the vital services they provide for Palestinian refugees. and the urgent need to supply funding for those services, especially in light of the US government decision in 2018 to cut funding for that humanitarian aid.

Use the following links to download the brochure in two versions, one for sharing online and in social media and the other for professional printing sevices:
Flyer - for digital use (bleed)

Brochure - for digital use (bleed)

Brochure - with crop marks and margins for professional printing services 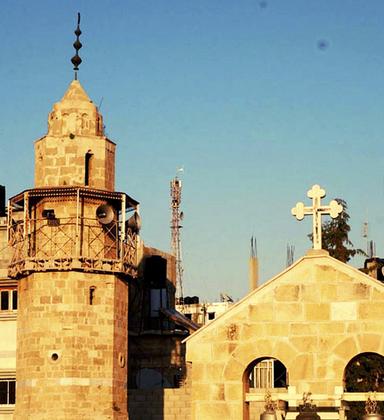 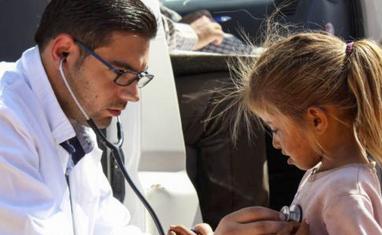 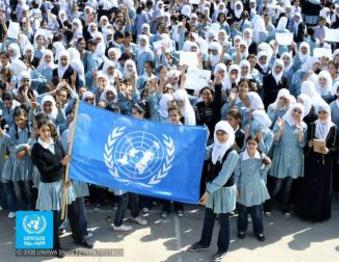 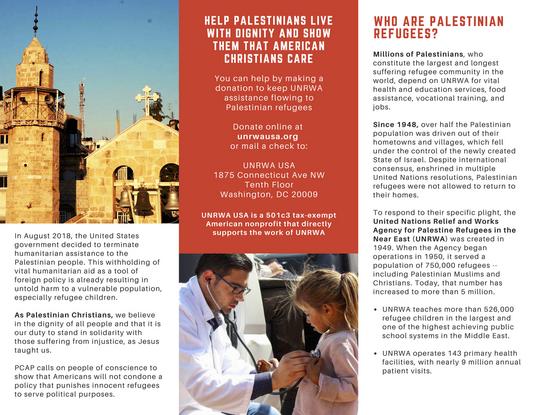 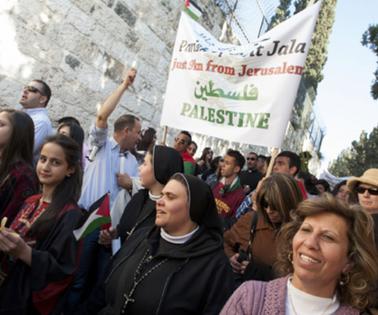