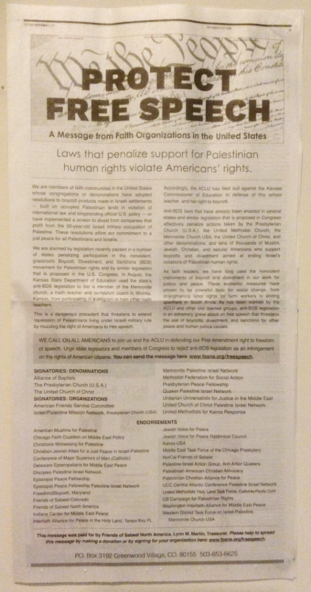 In a historic show of unity, dozens of faith

advertisement, one day after 20 top Christian

leaders send an open letter to Congress. Both

actions include United Methodists; both defend

the right to boycott as constitutionally

published on November 7th in The Kansas City Star,

calling on all Americans to oppose those state and

penalize our right to freedom of speech in the form

The statement’s signatories and endorsements

include three denominations - The Alliance of

Baptists, The Presbyterian Church (USA) and

The United Church of Christ - and dozens of

and other economic acts of conscience to protest Israel’s

abuses of Palestinian human rights and violations of international law.

The newspaper statement comes just one day after 20 Christian leaders representing 17 faith-based organizations sent an open letter to all members of Congress, opposing the “Israel Anti-Boycott Act.” The letter was sent by diverse Christian leaders in the U.S., from the National Council of Churches, The United Methodist Church, The Evangelical Lutheran Church in American, the Presbyterian Church (USA) and a dozen other bodies.

Over the past several years, a series of laws intended to suppress boycotts related to Israeli human rights abuses have been passed in Congress and two dozen states across the country; more punitive legislation, known as the Israel Anti-Boycott Act, is now pending in Congress. The ACLU and other civil liberties groups have warned that these laws are unconstitutional and pose a serious threat to the First Amendment right to freedom of speech, which the Supreme Court has made clear includes the right to boycott.

Anticipating the importance of this legislation, UMKR published a policy brief early in 2016 to alert United Methodists and the American public about this growing threat to essential freedoms in the United States.

In 2017, a member of the Mennonite Church was prevented from working as a teacher on a state contract because she supports her church’s call to boycotts in support of Palestinian rights. In October, ACLU filed a lawsuit on her behalf against the Kansas State Dept of Education, in the first major legal challenge to anti-BDS legislation.

The statement in The Kansas City Star refers to this case in Kansas; it also addresses the widespread phenomenon of such legislation in the U.S.:

“We are alarmed by legislation recently passed in a number of states penalizing participation in the nonviolent, grassroots Boycott, Divestment, and Sanctions (BDS) movement for Palestinian rights, and by similar legislation that is proposed in the U.S. Congress… As faith leaders, we have long used the nonviolent instruments of boycott and divestment in our work for justice and peace.”

The statement concludes with a call to all Americans to join us in “defending our First Amendment right to freedom of speech. Urge state legislators and members of Congress to reject anti-BDS legislation as an infringement on the rights of American citizens. “

UMKR has provided United Methodists in the United States and all concerned American citizens with an action page to send that message in one step to their members of Congress, the White House, their state legislators and their Governors.

In recent years, a growing number of Americans, including mainline Christian denominations such as The United Methodist Church, The Presbyterian Church (USA), The Evangelical Lutheran Church in America, The United Church of Christ, and the Mennonite Church USA, have called for boycotts or implemented investment screens in support of Palestinians struggling peacefully for their freedom from Israel’s oppressive, 50-year-old military occupation regime.

As the Nov 7th newspaper statement notes, Americans have a long and honorable tradition of using boycotts to address injustice and support human rights causes, from the Civil Rights movement, to the struggle against apartheid in South Africa, to attempts to protect the rights of immigrants, people of color, and others whose rights are threatened today.

There should be no free speech exclusion for Americans who support Palestinian rights and freedom.

United Methodists, along with our partners in diverse Christian denominations and other faith communities, will continue to stand with those who are being targeted by unjust laws for acting according to their conscience. We also will continue to use nonviolent methods, including boycott, divestment and the call for appropriate government sanctions, to support international law and the goal of freedom, justice, and equality for all Palestinians and Israelis.