March 2017: The list of missionaries' names in this press release has been updated due to an inadvertent omission.

February 10, 2017 – Twelve missionaries representing diverse personal and theological backgrounds, who have served the United Methodist Church’s ministries in Israel/Palestine over the last four decades, have published a letter to President Donald Trump expressing their deep concern about the proposed move of the U.S. embassy to Jerusalem.

Grace and Peace to you in the Name of the Lord.

We the undersigned are all the United Methodist missionaries who serve or have served in Israel and Palestine. We represent over 100 years of direct experience in that part of the world.

We want you to know that we firmly oppose moving the US embassy to Jerusalem. Such an action would have the effect of endorsing Israel's claims to full sovereignty over that beloved and holy city which should be open to all and whose fate should be determined through bilateral negotiations. We can likewise assure you that going down this road would provoke tremendous opposition to the United States from the international community, from Muslims and Arabs around the world, as well as countries with whom we now have close relations, like Jordan. Palestinians will be especially grieved as they see their chances for a true homeland diminished even further.

In all fairness, for the US to be a just broker of peace among Israelis and Palestinians, moving the US Embassy to Jerusalem must be simultaneously matched with recognizing a Palestinian state and opening a US Embassy in that new state.

As peacemakers who follow the Prince of Peace, we urge you to consider our urgent requests. We commit to pray for you and your administration as we together seek to establish just and lasting peace for all -- Israelis and Palestinians.

God's blessings on you.

United Methodists for Kairos Response strongly agrees with these missionaries’ view that the proposed embassy move would incur severe consequences for the people of that region and damage U.S. relations with allied nations. UMKR notes that no nation in the world has their embassy in Jerusalem, despite Israel’s claim of all of Jerusalem as its capital, including East Jerusalem, which has been under military occupation since 1967 and which has been subject to ethnic cleansing by Israel since that time.

UMKR seeks freedom, justice and equality for all Palestinians and Israelis, and in all its work, heeds the words of fellow believers, the Christians of Palestine. In the Kairos Palestine Document, “A Moment of Truth” – endorsed by all the Heads and Patriarchs of the Churches of Jerusalem and signed by over 3000 Palestinian Christians – they write:

“Jerusalem is the heart of our reality. It is, at the same time, symbol of peace and sign of conflict. While the separation wall divides Palestinian neighborhoods, Jerusalem continues to be emptied of its Palestinian citizens, Christians and Muslims. Their identity cards are confiscated, which means the loss of their right to reside in Jerusalem. Their homes are demolished or expropriated. Jerusalem, city of reconciliation, has become a city of discrimination and exclusion, a source of struggle rather than peace.”

“Jerusalem is the foundation of our vision and our entire life. She is the city to which God gave a particular importance in the history of humanity. She is the city towards which all people are in movement – and where they will meet in friendship and love in the presence of the One Unique God….Today, the city is inhabited by two peoples of three religions; and it is on this prophetic vision and on the international resolutions concerning the totality of Jerusalem that any political solution must be based. This is the first issue that should be negotiated because the recognition of Jerusalem's sanctity and its message will be a source of inspiration towards finding a solution to the entire problem, which is largely a problem of mutual trust and ability to set in place a new land in this land of God.” 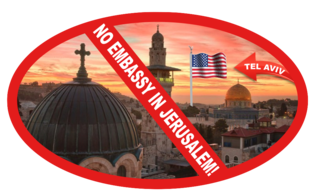