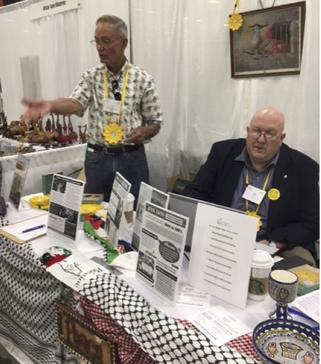 takes place. No, it's not General Conference, it is

UMW reports that 8,000 women came to the

for education and action in the huge display area

called Experience Hall. Due to some good

planning by UMW, the food service was also

in Experience Hall, so most of the women at

UMKR had an excellent location, and our

volunteers rarely had a quiet moment, engaging multiple visitors simultaneously as they explained what is happening to the Palestinian people and how United Methodists can help.

Working in partnership with Rebuilding Alliance, UMKR chose a special focus for education and action at the Assembly: the lack of electricity in Gaza.

For much of this year, Gazans have had electricity for only four hours per day or less. That is just one piece of the dire humanitarian catastrophe in Gaza, due primarily to the 11-year blockade and siege of this trapped population of 2 million. Learn more about the frightening situation in Gaza.

As a means to provide immediate aid to Gazans - and also as tool for consciousness-raising - we invited the women at Assembly to make a donation and bring light to the children of Gaza with “Little Suns.” Each Little Sun is worn on a lanyard, or it can be propped up inside a house to light up a room. If left in the sun for a few hours in the daytime, the Little Suns provide eight hours of light at night. They are designed to last for five years.

By the end of Assembly, 270 Little Suns were on their way to light up homes in Gaza, and a lot of women had learned more about conditions in Gaza, information that they will bring to their fellow United Methodists throughout the church.

UMKR also disseminated nearly 500 cards to women who wanted to learn more about our work, and we had regular crowds around our Quick Facts displays.

David Wildman - staff at the UMC General Board of Global Ministries (GBGM), and GBGM liaison to the UMKR Steering committee - presented a well-attended workshop each day of the Assembly, titled “Nonviolent Action for Justice, Freedom & Equality in Palestine/Israel.” [See the workshop description below**]

There seemed to be far more interest and knowledge among participants than there had been at the 2014 UMW Assembly in Louisville, Kentucky. David made sure to speak about UMKR, and there was considerably more understanding of our mission as well. Volunteers at the UMKR booth report that they always knew when David’s workshop had just ended, because they’d have a sudden uptick in enthusiastic attendance by women he’d sent there!

UMKR volunteers included Connie Hammond of Columbus, OH, Alma Manney from Florida, Karen Peterson from the Upper New York conference, and Doug Whitmore (husband of UMKR’s co-chair Andrea), from the Missouri conference. They were joined by Kristin Henderson of Rebuilding Alliance, the organization UMKR partnered with to brings those Little Suns to Gaza.

It was a busy and exhausting few days for all. We know it was time well invested in bringing the voice of the Palestinian people to the dynamic assembly of 8000 United Methodist women.

**Did you know?
With roughly 800,000 members, United Methodist Women (UMW) is the largest faith-based women's organization in the world. Their motto is "Faith, Hope, Love in Action," and when these caring and motivated women get together, action does follow! United Methodist Women believe in advocacy to change systems, paired with service in the community to transform society at the roots.

*Description of David Wildman’s workshop:
May 2018 will mark 70 years since the founding of the state of Israel and what Palestinians call the Nakba, or catastrophe in Arabic. In 1948-49 more than 70% of Palestinians were uprooted from their homes and forced to flee as refugees. They are still waiting and working for justice to become a reality. Despite decades of discrimination, displacement, and destruction, Palestinians offer a faithful and hope-filled witness to the power of love in action as the path to lasting justice and peace for all. The Kairos Palestine document, launched by Palestinian Christians in 2009, draws on the framework of faith, hope, and love in I Corinthians 13 to guide our action as churches.