​PART THREE: Recent History
•  Why did the current crisis begin?

•  This whole thing happened after the famous handshake on the White House lawn.  Wasn't that supposed to end the conflict between Israel and the Palestinians?

•  Why didn't the Oslo process work?

•  What were Oslo's "final status" issues?  Why were they so difficult?

•  Whose capital is Jerusalem?

•  Who are the Palestinian refugees and why won't Israel let the refugees return home?

•  What happened to settlements and settlers during the years of the Oslo process?

•  What would a Palestinian "state" as determined by Oslo/Camp David have looked like?

•  What happened at Camp David?  Why did it fail?

•  Didn't Israeli Prime Minister Ehud Barak make the most generous offer in history to the Palestinians?  Why did they reject it?

•  What would a comprehensive peace have looked like at Camp David?

•  What happened to Israel and Palestine during the 1991 Gulf War?

•  What was the first "intifada" all about?

• What were conditions like in the occupied territories before the first intifada?

• How did Israel come to be in control of the West Bank, Gaza, and East Jerusalem?

•  What was the international community's response to the 1967 War?

•  What was the U.S. relationship to the occupation?

•  What caused the Sabra-Shatila massacre in Lebanon?

•  Were the Palestinians demanding national rights and an independent state before the 1967 war?

•  How was the PLO viewed in the Arab Middle East, the UN and in the rest of the world?

•  What is Zionism? Do all Jews support Zionism?

•  What is the "Road Map" that President Bush and British Prime Minister Tony Blair, on the eve of the Iraq war, seem so convinced will end the Palestine-Israel conflict?

•  What would a just and comprehensive peace between Israel and Palestine look like?

•  Won't a Palestinian state be a threat to Israel's security? What about terrorism?

•  What would the Middle East region look like with a secure Israel and an independent Palestine living side by side?

•  Is a two-state arrangement really fair and based on justice?

For more information on the Palestinian-Israeli conflict, please find below books, materials, and website links to centers that produce reports on current affairs, documents, maps and books, as well as to the work of some of the groups active in the cause of just peace.

The full text of this excellent educational too has been posted on the website of US Campaign to End the Israeli Occupation.

See the main page for the whole primer at US Campaign's website here.

Support the work of UMKR

The vital peace and justice

work of UMKR can only

continue with the support of those who believe in it. No gift is too small! Donate securely online or by mail. 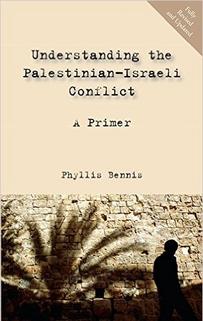 ​​PART ONE: The Crisis
•  Why is there so much violence in the Middle East? Isn't there violence on both sides?

•  Why should Americans care about violence in the Middle East?

•  Why is the Middle East so important to the U.S. and internationally?

•  What caused the current crisis?

•  Why is the current level of violence so intense?

•  Isn't Israel just trying to fight against terrorism, just like the U.S. in Afghanistan?

•  Who are the "suicide bombers" and why are they killing themselves and others?

•  Why are only Palestinians carrying out these suicide bombings?

•  Are all Palestinians terrorists or supporters of terrorism?

•  Why are Palestinians in Israel at all?

•  What are the occupied territories?

•  What does "military occupation" mean?

•  What is the fence that Israel is building in the occupied territories?

•  What is "transfer"?  Why did talk of "transfer" of Palestinians increase during the build-up to war in Iraq?

•  What do the Palestinians want?

•  What does Israel want?

•  If Jerusalem is the capital of Israel, why are there so many Palestinians in the eastern part of the city?

•  Who controls the West Bank, East Jerusalem and the Gaza Strip?

•  Why does Israel still occupy those areas?

•  Who are the Palestinians?  Where did they come from?

•  Why are Palestinians still living in refugee camps? Where are they from and why don't they go home?

•  What is the Palestine Liberation Organization (PLO)?

•  What is the Palestinian Authority (PA)?

•  Who are the Israelis? Where did they come from?

•  What's the difference between Jews and Israelis?

PART TWO: The Other Players
•  Why is the Israel-Palestine conflict so important on the global stage?

Why does the rest of the world care, and get so involved, in this conflict in such a small place?

•  Why hasn't the U.S. been part of that consensus?

•  Why is the U.S. the central player in the Middle East?

•  What explains the U.S.-Israeli "special relationship"?

•  What is the Bush administration Middle East policy all about?

•  Where does U.S. aid to Israel fit in the broader scheme of U.S. foreign aid? Does the U.S. provide aid to the PA also?

•  Didn't the U.S. support creation of the Palestinian Authority?  Why did the U.S. treat it differently than the PLO, which Washington usually tried to undermine or sideline?

•  Who else should be at the center of Middle East diplomacy?

•  Didn't the United Nations create the State of Israel?  Why didn't it create a State of Palestine too?  Why doesn't it now?

•  Why is Israel so often criticized in the UN?  Aren't other countries just as guilty of human rights violations?

•  What is the role of the UN in the Middle East these days?  Why isn't the UN in charge of the overall peace process?

•  Why is Israel isolated from Arab countries in the region and in the UN and other international forums?

•  Since Jordan's population is about 2/3 Palestinian and there are 21 other Arab countries, why do the Palestinians insist on having a new state of their own?

•  Don't the Arab countries want to destroy Israel and drive the Jews into the sea?

•  How does Israel see its role in the Middle East region?

•  What role does Europe play in the conflict?  Why doesn't it do more?