Israeli annexation of occupied Palestinian territory, a looming travesty of justice. What seemed unthinkable a few years ago may actually happen this year. Israeli leaders are threatening to formally absorb large portions of the West Bank into Israel, applying Israeli sovereignty over that land absolutely and permanently.

In this video:
HOW would annexation of Palestinian land institutionalize apartheid?  WHY has this long-threatened Israeli action suddenly moved forward? WHAT tools do we have to oppose this plan and push for justice?

MORE ON THIS TOPIC
Palestinians in the West Bank, which includes East Jerusalem, and in Gaza have suffered for decades under Israeli occupation and oppression.

Israel continues to disregard the UN Security Council's declaration in 1967 that it must withdraw from the territories it claimed through warfare.  Now it is planning to absorb large portions of this last remaining land for the Palestinian people, imposing Israeli sovereignty over it absolutely and permanently.

The HOST for this presentation is Bridget Cabrera,
MFSA Executive Director, and the MODERATOR is
Rev. John Wagner, UMKR Co-chair. 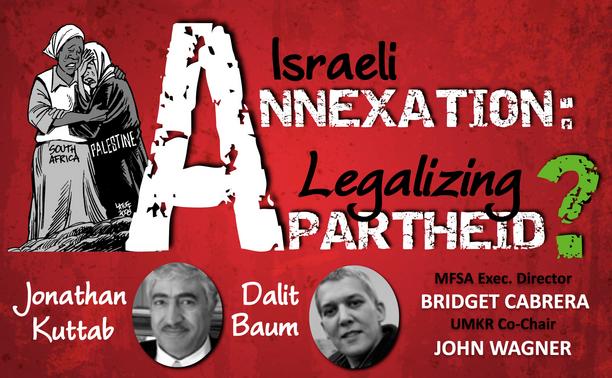 Presented on 10 June 2020, two of the  leading  activists  and speakers on Israel/Palestine in the US:

BELOW THE VIDEO, SEE MORE INFORMATION ABOUT THIS TOPIC AND OUR SPEAKERS .

ABOUT OUR SPEAKERS
Jonathan Kuttab, J.D., is a Palestinian attorney and human rights activist. He grew up in Jerusalem and studied in the US, graduating from the University of Virginia Law School. He is a member of three Bar Associations: New York, Palestine, and Israel.
Kuttab has founded a number of human rights organizations including Al Haq, the oldest and the leading Palestinian human rights agency, and the Mandela Institute for Palestinian Prisoners.
Kuttab serves on the Bethlehem Bible College Board of Trustees and is Chairman of the Board for the Holy Land Trust. He is active in many other civil society organizations, both in Palestine and internationally, and he is a recognized authority on international law, human rights and Palestinian and Israeli affairs.

Dalit Baum, Ph.D., is a native Israeli and the director of the Economic Activism Program for AFSC, the national Quaker organization, working in their San Francisco office. She is the co-founder of the Coalition of Women for Peace in Israel and Who Profits from the Occupation, which is today an invaluable contributor to the global movement for Palestinian rights.
Baum is a feminist scholar and teacher who has taught about militarism and the global economy in Israeli and U.S. universities. She also lectures on the economics of the Israeli occupation and the military industry, the Boycott, Divestment, and Sanctions (BDS) movement, and corporate responsibility.
Baum has been active with many groups in the Israeli anti-occupation and democracy movement, and she has been interviewed by The Nation, the Associated Press, The Guardian, Mondoweiss, and Monthly Review Magazine; she also has appeared on C-SPAN and the Real News Network.