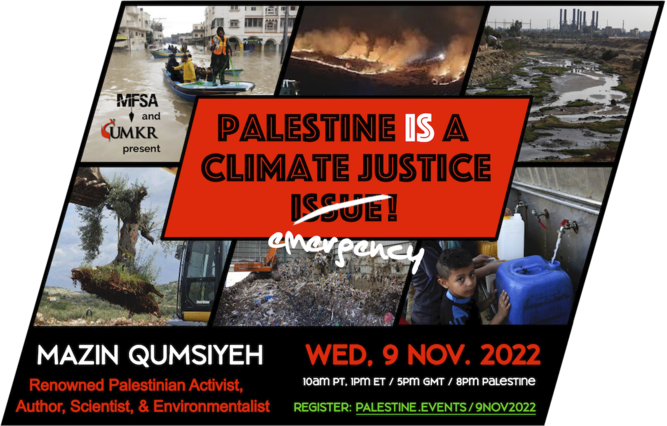 INFORMATION SHARED DURING THE WEBINAR

In addition to hundreds of articles published in news outlets, journals, and collections, Qumsiyeh is the author of several books, including notably: "Sharing The Land Of Canaan: Human Rights and the Israeli-Palestinian Struggle" and "Popular Resistance in Palestine: A History of Hope and Empowerment."
About Popular Resistance: "This is a timely and remarkable book written by the most important chronicler of contemporary popular resistance in Palestine. Mazin Qumsiyeh brilliantly evokes the spirit of Mahatma Gandhi, Edward Said, Rachel Corrie and many others, to tell the unvarnished truth about Palestine and Zionist settler colonialism.
Learn more and see where to order it:
http://qumsiyeh.org/popularresistanceinpalestine/

Mazin Qumsiyeh showed some powerpoint slides during the webinar and viewers asked if those could be shared. We have all of his powerpoint presentation from which those slides were take, in the form of a pdf file. Download the pdf

MAZIN QUMSIYEH, WRITING ON THE ENVIRONMENT:
• Stopping the Environmental Nakba
A statement from the Palestine Institute on Biodiversity and Sustainability
https://mondoweiss.net/2021/11/stopping-the-environmental-nakba/
• Environmental Justice in Palestine: Rights of Natives to Their Environment Versus Colonial Onslaught
http://thebeirutforum.com/qumsiyeh/
• Environmental Education and Climate Change in a Colonial Context
https://www.palestinenature.org/research/159.-Qumsiyeh-et-al.pdf

Investigate!
A tool created by AFSC to discover corporations involved in incarceration and immigrant detention, the Israeli occupation, and the border industries.
https://investigate.afsc.org/

USACBI, The US Campaign for the Academic and Cultural Boycott of Israel
Recommended by Mazin Qumsiyeh as powerful action to affect public opinion and change systems.
https://usacbi.org/ 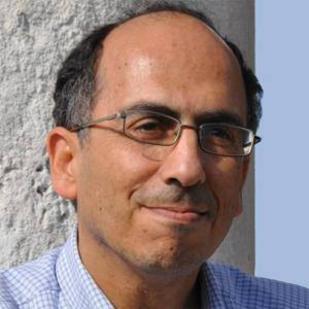 ​Scroll down the page to watch this video​

Palestine IS a Climate Justice Issue!

Presented by UMKR and MFSA​

The world's climate and environmental crisis touches every corner of the globe. Everyone in the world is truly "in this together."
However, some are being hit harder and sooner. The most vulnerable populations of the world are bearing the brunt of climate change and suffering daily environmental injustice.

Nowhere is that more true than in Israel/Palestine.

For Palestinians, climate change is not just a natural phenomenon, but a political one.
Israel‘s regime of occupation and apartheid, which denies Palestinians the right to manage their land and resources, greatly heightens the impact of the climate crisis for Palestinians, making them more vulnerable to all climate-related conditions

Today, after a century of unbridled colonialism, the historically green and fertile land of Palestine has lost much of what it once offered the world, and environmental conditions continue to deteriorate rapidly.

The reality is dramatically different.

Join us to learn the environmental reality in Israel/Palestine today, what is being done by the land's indigenous protectors. and what we can do to support their efforts.

MAZIN QUMSIYEH
We are have as our speaker one of

Palestine's leading  voices on
Palestinian activism and resistance,
Mazin Qumsiyeh, who is  also an
authority on the natural world

of Palestine and environmental justice.

Dr. Qumsiyeh is the founder and

director of the Palestine Museum

of Natural History and the Palestine

Institute for Biodiversity and

In addition to hundreds of articles in news outlets, journals, and collections, Qumsiyeh is the author of several books, including Sharing The Land Of Canaan: Human Rights and the Israeli-Palestinian Struggle and Popular Resistance in Palestine: A History of Hope and Empowerment.
A renowned human rights defender and winner of multiple peace and human rights awards, Mazin Qumsiyeh has lectured around the world on the Israeli-Palestinian conflict and the Palestinian liberation struggle.

As we gather online with Mazin

Qumsiyeh,  representatives from around

the world are meeting in Egypt for the

conference, COP27.
As Dr. Qumsiyeh shows us, the fight  for
climate justice for all is directly connected
​to the Palestinian struggle. ​Palestine is indeed a climate justice issue.

Watch the webinar below and below the video, see information and resources shared during the webinar. 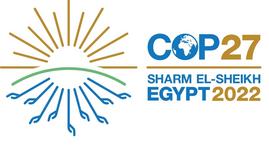