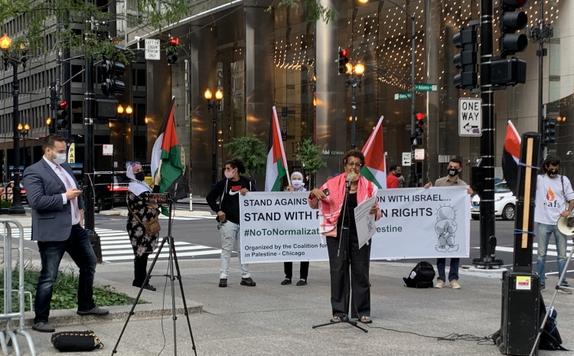 FEATURED: What you need to know Israel’s agreements
with UAE and Bahrain  AFSC  •  17 September 2020
On Tuesday, President Donald Trump hosted Israeli Prime Minister Benjamin Netanyahu and the foreign ministers of the United Arab Emirates (UAE) and Bahrain at the White House, where the guests signed agreements normalizing their diplomatic relations. The ceremony followed recent announcements by the U.S. that it had helped facilitate separate diplomatic agreements between Israel and the UAE and Israel and Bahrain.

While Trump and others have lauded the agreements as “peace” deals, the Israel-UAE and Israel-Bahrain accords should concern all seeking justice and sustainable peace in the region. Rather than building toward peace, these agreements will further militarize the region—while doing nothing to end ongoing gross human rights violations perpetrated by Israel, the UAE, and Bahrain.
Here’s what you should know:
Read more

Annexation still on the table, Netanyahu says, but U.S. asked Israel to 'temporarily
postpone' applying sovereignty to parts of West Bank in order to advance the peace
agreement.
Israel and the United Arab Emirates reached a historic peace deal on Thursday that will lead to a full normalization of diplomatic relations between the two Middle Eastern nations in an agreement that U.S. President Donald Trump helped broker.
Under the agreement, Israel has agreed to suspend applying sovereignty to areas of the West Bank that it has been discussing annexing, a joint statement by all three parties to the agreement said.
Read more

1. Can this deal be described as "historic diplomatic breakthrough (that) will advance peace in the Middle East region"?
The tripartite announcement suggests that Israel ended its occupation of Palestine, which is not the case. Until the date of this announcement, the UAE's historical position on Palestine remained in line with the position of the Arab League and its member states.

According to the Arab Peace Initiative of 2002 (API), the advancement of peace in the Middle East and hence the normalization with Israel can only happen once Israel affirms: (I) "Full Israeli withdrawal from all the territories occupied since 1967," including the occupied Syrian Golan and the remaining occupied Lebanese territories. (II) "Achievement of a just solution to the Palestinian refugee problem to be agreed upon in accordance with U.N. General Assembly Resolution 194." (III) "The acceptance of the establishment of a sovereign independent Palestinian state on the Palestinian territories occupied since June 4, 1967 in the West Bank and Gaza Strip, with East Jerusalem as its capital." Thus, with this deal, the UAE contravenes the API and all its terms of reference.
Read more

“HUGE breakthrough today,” crowed Donald Trump on Twitter as he announced the newpeace deal between Israel and the United Arab Emirates (UAE). The deal makes the UAE the first Gulf Arab state and the third Arab nation, after Egypt and Jordan, to have diplomatic ties with Israel. But the new Israel-UAE partnership should fool no one. Though it will supposedly stave off Israeli annexation of the West Bank and encourage tourism and trade between both countries, in reality, it is nothing more than a scheme to give an Arab stamp of approval to Israel’s status quo of land theft, home demolitions, arbitrary extrajudicial killings, apartheid laws, and other abuses of Palestinian rights.

If there is one conclusion to draw from the agreement this week between Israel and the United Arab Emirates – with Israel temporarily “suspending” its threat to illegally annex parts of the West Bank, in return for “full normalisation” with the Gulf state – it is this: The peace industry is back in business.
But this time, unlike the interminable Oslo Accords signed a quarter of a century ago, there won’t even be the pretence that Palestinians are needed for “Middle East peace” to proceed. This is a process that takes place over their heads, a dialogue from which they are entirely absent.
Read more

The UAE-Israel deal is great news for the United States. This is how the Emiratis, and Jared Kushner, helped Netanyahu climb down from his annexation talk – and how Israel won an outsized diplomatic payoff

When the United Arab Emirates’ Ambassador to the United States, Yousef al-Otaiba, decided to publish an op-ed in Hebrew in the Israeli newspaper Yediot Ahronot in mid-June, his intent was to influence the Israeli debate on West Bank annexation.

The op-ed hit its mark. Al-Otaiba’s unprecedented, unmediated address got Israelis’
attention and dominated political conversations for days. But he did more than that. He also opened the door to a major step forward in breaking down barriers in Israeli-Arab ties, realized this week with the surprise announcement that Israel and the UAE had reached agreement to normalize relations.
Read more

Any comment on regional implications of the Agreement is, of course, highly speculative as the real reasons for such an initiative are rarely disclosed by those with the power of decision. In this case the uncertainties are magnified by some central ambiguities in the language of the text, especially the word ‘suspend’ in relation to Israeli plans to annex portions of the West Bank. This territory is considered internationally to be part of Occupied Palestine, and by Israel as ‘disputed territory.’
Read more

The invocation of Abraham is just the latest move to rewrite the horrific
colonial reality of Zionism and Israel in terms of religious and fraternal
discord. The recent US-brokered normalisation agreement between Israel and the United Arab Emirates, signed on 13 August, has been dubbed by Donald Trump "the Abraham Accord". Trump declared on the occasion that "Emirati Muslims can now pray in the historic Al- Aqsa Mosque in Jerusalem, the third holiest site in Islam".
The invocation of Abraham and the issue of religion is hardly a Trumpian innovation.
Read more

APN's Ori Nir in the Forward: "Peace with the UAE is fabulous. But Israel’s existential problem is at home"
Americans for Peace Now  •  3 September 2020

Shortly after the El Al jet arrived back from Abu Dhabi at Ben Gurion Airport last Tuesday, bringing the dignitaries and a large chunk of Israel’s press corps home, an Israeli radio channel broadcast a scoop: Israel and the United Arab Emirates will negotiate jointly sending astronauts to outer space. There was great excitement in the studio. “UAE and Israeli astronauts, together, in the same rocket ship,” crowed one anchor, while the other quipped that “They’ll pay for the fuel.”
Funny.
Well, not really.
Read more

The U.A.E.-Israel Flight Is Nothing to Celebrate
New York Times  •  8 September 2002

As part of its efforts to spin the agreement, the Trump administration claimed that it will halt annexation plans that Prime Minister Benjamin Netanyahu of Israel had announced for parts of the West Bank. But shortly after the U.A.E. statement, Mr. Netanyahu declared that annexation is not, in fact, off the table; it’s on a temporary hold. As for the possibility of a two-state solution, for Palestinians, this deal is not, as some have suggested, a reassuring step forward. Rather, it’s an indication of how the major parties in earlier peace attempts — the U.S., Israel and Arab countries — are willing to move ahead with plans that disregard Palestinian rights.
Read more

As the Trump administration celebrates deals establishing diplomatic ties between Israel and the United Arab Emirates and Bahrain, we speak with Palestinian American legal scholar Noura Erakat, who says Trump’s “peace” agreements are a sham. “This is not about advancing any kind of meaningful, enduring peace, but instead about entrenching a geopolitical alliance that would otherwise increase oppression for people of the Middle East,” says Erakat, assistant professor at Rutgers University and author of “Justice for Some: Law and the Question of Palestine.”
Watch the program or read the transcript

If I were Israeli I’d be feeling pretty great today. Two longtime enemies of the Jewish state have folded their hands, and Saudi Arabia, whose king famously warned FDR against supporting Zionism, is in the wings. The militant strategy of Jabotinsky and Labor too seems to have paid off: The Arabs won’t accept us? We will pound the —- out of anyone who doesn’t accept us, until they do.
Read more

Trump Induced Normalization Agreements with Gulf Monarchies: Is This What Peace Looks Like?
Richard Falk  •  18 Sept 2020

These normalizing moves on the part of UAE and Bahrain, under pressure from the U.S., are a form of symbolic politics‘ that have weight because they are reinforced geopolitically by being so ardently promoted by the Trump presidency. By way of contrast, the 130 or so diplomatic recognitions of Palestine as a state by governments around the world have had little significance because they lack political traction to make anything concrete and substantive change.
Read more

Once upon a time, ages and ages ago, when a new young prime minister came to power, a right-wing American research institute composed a policy paper for him, laying out a new strategic approach that sought to shatter the formative principle of “territory for peace.”
A brief paragraph from that document is most illustrative of its spirit and intent: “We cannot make peace unilaterally, no matter how many concessions we make. Only the Arabs’ unconditional acceptance of our rights, particularly in their territorial dimension – ‘peace for peace’ – offers a solid basis for the future.”
Read more

Every time Prime Minister Benjamin Netanyahu gives a speech to the Israeli public about the struggle against COVID-19, he reminds his listeners with great excitement about the so-called peace accords with Arab countries that have never fired a single bullet at Israel.
It seems the normalization agreements with the United Arab Emirates and Bahrain are the solution to the multiple political crises Netanyahu is facing: his failure to manage the pandemic, rising death rates, a crumbling economy, a protest movement that refuses to fade in the face of a nationwide lockdown, and his ongoing corruption trial. This is the rabbit he is pulling out of his hat.
Read more