“The U.S. and Israel will announce tomorrow that they are expanding three agreements on scientific cooperation to include Israeli settlements in the West Bank, Israeli and U.S. officials tell me…This is a substantial policy shift for the U.S., which did not previously allow its taxpayers’ money to be spent in the Israeli settlements…This policy shift was driven by Friedman, Israeli officials say. He intended it as a gesture to Netanyahu and to Israeli settlers after Netanyahu’s vow to annex parts of the West Bank was taken off the table as part of Israel’s normalization deal with the UAE…An Israeli official told me this move is a signal of U.S. recognition of Israeli sovereignty in the West Bank. I asked Friedman about that claim and he denied it, saying the deal was only meant to enhance scientific cooperation. But Israeli higher education minister Zeev Elkin had a different view. He tweeted that the deal was “a big achievement for Israel’s sovereignty” in the West Bank and “another step towards international recognition of our rights” there.”
Read more

“The US is set to turn its declaration that settlements in Judea and Samaria are not necessarily illegal into action for the first time on Wednesday, expanding a set of scientific cooperation agreements with Israel to include those areas and the Golan Heights…“This is really quite momentous,” [Eugene Kontorovich] said on Tuesday. “It is the first time the US has adopted a policy that explicitly and clearly authorizes the use of funds across the green line… It’s a very strong recognition that settlements are not illegal. They announced that, but now they’re putting meat on the bones.””
Read more

“The United States and Israel will eliminate territorial restrictions for bilateral agreements in a ceremony on Wednesday. The move will build upon a policy shift made by U.S. Secretary of State Mike Pompeo this past November, in which America no longer recognizes Israeli settlements in Judea and Samaria as illegal under international law.”
Read more

U.S. President Donald Trump said on Tuesday that up to 10 more countries will normalize ties with Israel, following agreements and declarations secured from the United Arab Emirates, Bahrain and Sudan.
According to Trump, any further steps in peace accords between Israel and other countries will be taken after the U.S. election on November 3.
Read more

“”This is an important victory over everyone who seeks to delegitimize anything Israeli over 67 lines,” Netanyahu said. Turning to “those malevolent boycotters,” he added, “you are wrong and you will fail, because we are resolved to build our lives and our ancestral homeland and to never be uprooted from here again.”…Sources involved in the agreement said, casino magnate Sheldon Adelson, a major donor to Ariel University and President Donald Trump, pressured the American administration to hold the ceremony ahead of the U.S. election on Tuesday.”
Read more

The administration of US President Donald Trump is preempting US elections by recognizing Israeli annexation of the West Bank, today said Hanan Ashrawi, member of the Executive Committee of the Palestine Liberation Organization (PLO).
“The agreement between Israel and the United States to gut all mention of the 1967 borders out of bilateral cooperation agreements between the two countries is a blatant unlawful act,” said Ashrawi in a statement.
“Extending US funding to the occupied West Bank, including illegal Israeli settlements, is a clear recognition of Israel´s annexation of Palestinian territory,” she added. “This upgrades the Trump administration’s involvement in Israeli war crimes to active and willful participation.”
Read more

In a move that has further legitimized Israel’s illegal settlement activity in the occupied Palestinian territory, the US and Israel have expanded a number of existing scientific cooperation agreements to now include Israeli institutions in the occupied West Bank and the Golan Heights. The new agreement, signed on Wednesday between Israeli Prime Minister Benjamin Netanyahu and US Ambassador to Israel David Friedman, amended three existing scientific cooperation agreements between the two countries.

According to the original agreements, which were created back in the 1970’s, cooperative projects between the US and Israel “may not be conducted in geographical areas which came under the administration of the State of Israel after June 5, 1967, and may not relate to subjects primarily pertinent to such areas.”
Read more 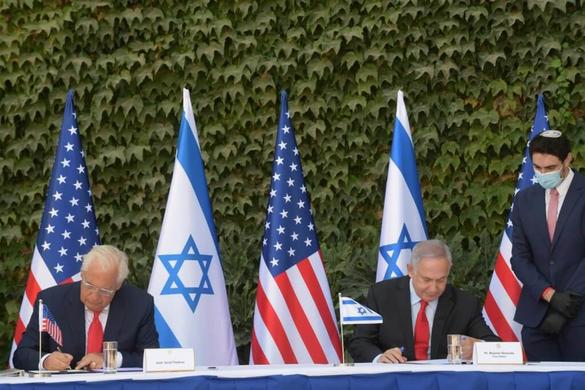