According to the Doctrine of Discovery, Christian explorers had the theological and legal authority to claim the lands they “discovered” for their Christian monarchs. Beginning with the Papal Bulls of the 15th century, European explorers were told and believed that any land not inhabited by Christians was available to be claimed and exploited.

This religious rationalization for world conquest has had a devastating impact on indigenous peoples in every corner of the globe. Its dangerous legacy continues to inflict pain and destruction in our times.

The Doctrine of Discovery, Resolution #3331
The Book of Resolutions of the United Methodist Church, 2016

"All levels of The United Methodist Church are called to condemn the Doctrine of Discovery as a legal document and basis for the seizing of native lands and abuses of human rights of indigenous peoples... The United Methodist Church will work toward eliminating the Doctrine of Discovery as a means to subjugate indigenous peoples of property and land."
See the full resolution

The United Methodist Church has stated a strong position about the evils of the Doctrine of Discovery and calls on the entire church to condemn and eliminate it.
But few of us know what it is!

In this series, we will delve into the Doctrine's historical roots, the impact of land ownership, the connection to white supremacy, and the consequences in North America, Africa, Asia, and the Middle East. We will also consider what can be done to address and reverse some of that legacy in our pursuit of justice.

Join us to take a deep look at the scourge of colonialism which connects the struggles of indigenous peoples on every continent.

The struggle to dismantle colonialism continues in the 21st century! Let us learn together,  so we can wage that struggle together more powerfully.

THIS SERIES IS PRESENTED BY:
Methodist Federation for Social Action (MFSA) is an intersectional social justice nonprofit that mobilizes Justice-Seeking People of Faith to take action on issues of peace, poverty, and people’s rights within the church, the nation, and the world. Learn more at www.mfsaweb.org.

The Native American International Caucus (NAIC) is an advocate for Native peoples, ministries, communities within, as well as outside of the United Methodist Church. "International" in the context of this name means collaboration that occurs between indigenous nations of North America. Learn more at www.naicumc.com.

United Methodists for Kairos Response UMKR) is responding to Kairos Palestine: A Moment of Truth, a statement of faith and urgent call to action from Christians in Palestine. UMKR seeks, through nonviolent means and in partnership with Palestinian Christians, freedom, justice, and equality for all Palestinians and Israelis. Learn more at www.kairosresponse.org.

See the press release for Part One

STEALING THE EARTH:
The Conquering of Indigenous Peoples,
the Role of Christianity, and
What Can Bring about Justice

From Popes to Presidents, the “Doctrine of Discovery” has empowered global leaders to change the lives of indigenous people throughout history. The Doctrine is a theological and legal concept that has legitimized the seizure of indigenous people's lands by those from supposedly Christian nations. This five-part webinar series will explore the history and impact of the Doctrine, the legacy of conquest that Christians have inherited to this day and how we might seek to repair and reverse that legacy.

The series begins by providing an understanding of the doctrine and its history. Further sessions will delve into the impact of the ownership of land, the power of narrative, white normativity, and the theological basis to respond, repair, and repent.

SEE ALL SESSIONS IN THIS SERIES ON THE RIGHT ▶︎ 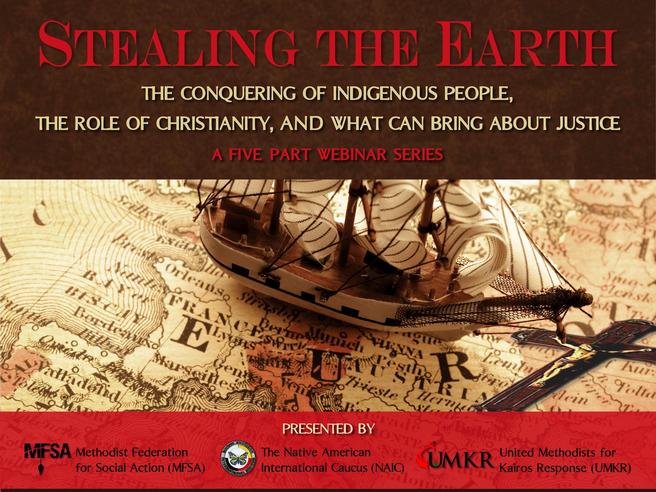 Part 1:
What is the Doctrine of Discovery?
Definitions and Demarcations.
11 August 2021

Part 2:
Whose Land? The doctrinal legitimization of theft of the people’s land
13 October 2021

Part 5:
Undoing the Doctrine: Developing a theology of repentance and repair
Postponed - date to be determined
(We will send an announcement to our full mailing list; subscribe here)